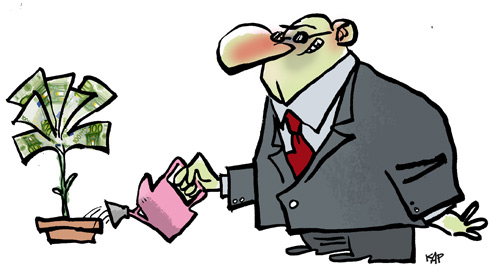 The anti-euro parties may be stronger than ever in the next European Parliament. But unless they start working together, they will not be able to backtrack on the single currency, brought in by the economic elites of Europe in the pursuit of their own joint interests.

Writing in De Volkskrant on October 2, 2013, Frits Bolkestein[former European commissioner and president of the Dutch liberal VVD party] declares his unhappiness with the euro:

“The monetary union is a failure. The euro has proved to be a sleeping pill that has induced the countries running deficits to indulge in a dream of dolce far niente instead of worrying about their own competitiveness. The result is a transfer union that is threatening to establish itself permanently. The monetary union was intended to foster friendship among the peoples of Europe. Instead, the German Chancellor, Angela Merkel, is being compared to Hitler in the countries running deficits. The Netherlands are caught in the trap and no longer know how to escape it.”

According to Bolkestein, the collapse of the euro is both inevitable and necessary. This prospect, though, is neither tempting nor likely. If I reach this conclusion, it is not just because that the rescue measures that reinforce the power of the European institutions are now being taken at dazzling speed – for example, the compliance test applied to budgets of member countries, or the strengthening and improvement of the Court of European Auditors, or even, of course, the creation of a permanent European Financial Stability Fund. These are all initiatives that would have been inconceivable just five years ago.

Corporations bet on a unified Europe long ago

If I believe that the European Union will continue to move forward on the path of political unification, as Helmut Kohl predicted back in 1991, it is also because a European economic elite has appeared on the scene. Searches that I carried out together with Eelke Heemskerk on the establishment of a European network by European “Captains of Industry” led us to conclude that businesses had put their money on a unified Europe a long time ago. This process has been evident since the end of the 1970s.

Relations between European companies increased sharply at that time, and the trend is getting stronger in the 21st Century. In addition to specially established consultative and round tables, we find, from 2005 to 2010, that the introduction of dual international functions (appointment to the supervisory boards of two companies in two different European countries) is a growing phenomenon among major European companies (the 300 top rankings of the Eurofirst index). These double mandates have increased from almost 300 to nearly 400.

However, the international solidarity of companies from across the Atlantic, in contrast, is on the wane. [[Europe is the only economic sphere in which the economic elite is increasingly merging]]. No less than 42 per cent of large international corporations identify opportunities for growth and acquisitions in Europe. For nearly a third of these companies, western Europe will be the preferred destination for mergers and acquisitions in the next two years. On continental Europe, Germany is the favourite target (62 per cent), while France (22 per cent) and the Netherlands (21 per cent) lag much further behind.

The populist parties are split

Frits Bolkestein, still, is right in some ways. By relying on cheap loans within the Eurozone, the countries in southern Europe lived beyond their means for years. But these countries have been called to order by Germany and the Netherlands, followed, with some reluctance, by France. The reforms and austerity measures in Greece, Italy and Spain are draconian.

Spain, it seems, has found the road to economic recovery. ”The Spanish economy is emerging cautiously from the crisis” leads De Volkskrant on October 10. The Spanish banking sector is now under European supervision, and the Spanish public sector also appears to be committed to a clean-up. What’s more, if Spain does emerge from this crisis, Italy has every chance of doing so too. In this context, the decline of Berlusconi is also a promising sign.

The road back would mean the end of the euro, which is what the radical right and the radical left in many European countries want. The political elites of various countries have not ceased to run into difficulties raised by the powerful anti-European sentiment. In all the countries, this mood will translate into lasting electoral success for the anti-European parties. But the populists, who are highly divided, will remain powerless so long as the economic elite of Europe remains firmly united. Greece may yet be forced to leave the monetary union. As long as it remains, though, the euro is in no danger.