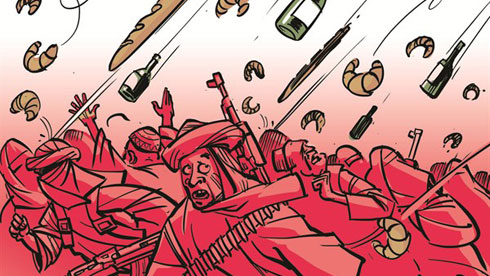 A week after launching operations against the Islamists who are in control of the north of Mali, the French are still the only Western forces with boots on the ground. But the bloc, which has renounced a joint military capability, is there on other fronts - just more discreetly.

The Union is being dragged into the dock - accused of being absent, of doing nothing in the crisis, of always being useless and of leaving France in the lurch. An objective analysis of the situation dismisses these criticisms in terms of the political, financial and humanitarian spheres, while nonetheless exposing a genuine failure of the common defence and security policy.

What has happened since we learned of Operation Serval? The Union has been organising crisis meetings to adjust the timing and actions the Union will take to aid Mali that were decided by the 27, in particular the EUTM Mali mission. The foreign ministers' meeting in Brussels on January 17 was the extension and demonstration of this commitment of the European Union, showing solidarity with the French in Mali. Politically and symbolically, at least.

Specifically, the Union will provide financial support, notably to the ECOWAS international mission in Mali (MISMA), under African leadership, to pay the salaries of the African soldiers.

The struggle in Mali confirms the difficulty of implementing the Common Foreign and Security Policy. Born with the Maastricht Treaty of 1993, the CFSP was meant to "lead, in time, to a common defence policy". In 1999 the Helsinki Summit stated that the European Union should, before the end of 2003, be capable of deploying up to 60,000 men by air and sea within 60 days.

Since then, the Union has run into difficulties putting together operational forces of this size. In 2004 the Military Capabilities Commitment Conference pioneered the concept of permanent tactical battlegroups of 1,500 men to help Europe respond more swiftly to emergencies. One of the main military ambitions of the EU was to have the capability to react quickly and effectively in conflict zones outside the EU.

It's precisely in Mali where a European field force could have intervened, flying the diplomatic and military flag of the Union. We are facing a crisis outside of the territory of 27, in a country less than 6,000km from Brussels. A crisis that makes necessary - at least for the majority of the international community, with a loose but genuine European consensus, not to mention the call for help from Mali's legitimate government - an early intervention before handing things over to another force from Africa and the region.

Nothing like this has happened. And as usual, the media, politicians and even the citizens are rounding accusingly on Brussels: France has been left on its own. There is no European defence. There is no Europe on the ground, no real diplomatic unity. However, Brussels is not responsible for these blunders. Instead, we have to look at the governments of the countries that had the temporary responsibility for the tactical battle group. At the messy state of affairs in France, Germany and Poland. France has decided to go it alone and ask for nothing and, it seems, no one. To Berlin and to Warsaw as well, Mali still seems to be a particularly French challenge, and any investment, promises very little return.

It's a serious challenge. That challenge is to the real diplomatic power of the Union, and it's clear that Catherine Ashton is struggling to find her place. Europe's diplomatic and military strategy is in trouble. However, we must repeat, the European Union is indeed at work in the crisis, as it already has been in Somalia and Palestine. France is not, indeed, alone in Mali.

Extremely discreet, with a complex and unreadable institutional architecture, lacking a clear figurehead, and with no voice of its own, the Union invites easy criticism from its member countries.

It is at work on the ground, providing financial backing, indeed getting involved - yet it's losing the battle on the media front and failing to mend its divisions when it comes to implementing a defence and security policy at the strategic and operational levels.

A diplomacy which is soft, economic, cultural, educational, media-savvy and sporting, cannot live without a strong relation – a fully-integrated, robust diplomacy that enjoys military and financial power. It also needs the influence of a 21st century little sister - a cyber-diplomacy, which is at present totally dominated today by the USA.

United defence and security strategy would make a united Europe more European yet.