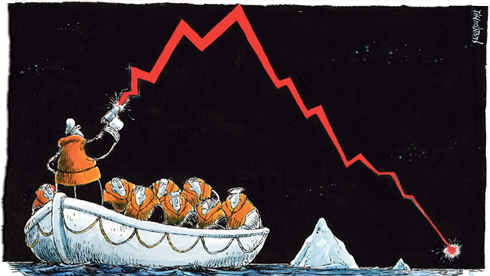 Europe's May 15 growth figures fell like a hammer blow. For the sixth consecutive quarter, the Eurozone economy has contracted – the longest period of decline in growth since the creation of the single currency, notes the European press.

With an average growth of -0.2 per cent in the first quarter (against -0.1 per cent in the EU as a whole) and hardly better prospects for the whole rest of the year (-0.7 per cent), according to Eurostat, the dreaded "double dip" has become a reality. The press attributes the result largely to the austerity policies.

“Eurozone sets bleak record of longest term in recession,” headlines the Financial Times. The economic daily notes that “this latest dismal record came after unemployment hit 12.1 per cent in the bloc, its highest level,” and that this data “is likely to add to pressure on the European Central Bank to take further action after cutting interest rates this month, and to revise down its economic forecast predicting a recovery later in the year.” For the Financial Times, the new data, which showed France had fallen back into recession, put further pressure on French President François Hollande to implement economic structural reforms —

The German government has become increasingly concerned that if Mr Hollande does not act quickly, Eurozone crisis management could become impossible. Berlin views most of the current crisis countries as manageable, though a flare-up in Italy again would pose grave problems. But if the crisis spread to France, Berlin believes the euro’s existence would again be called into question.

In Paris, Les Echos expects that the recession, now official, will "force France to reform". On the same wavelength as the FT, Jacques Attali, an economist and former adviser to François Mitterrand, calls on François Hollande to push through "shock reforms" –

Whether it's about competitiveness, the reduction of the public deficit, European issues, François Hollande has done plenty of things, more already than his predecessor did in the same time. But he should have gone faster. The presidency is like quick-setting cement: the longer one waits, the more difficult it gets to act. However, nothing that has not yet been done has been left undone irreversibly. The tempo must speed up.

For România liberă, the recession in the Eurozone has taken Europe “into the red” in 2013. The poor performance of the European economy, the Bucharest daily notes is raising worried eyebrows even across the Atlantic. There –

the policy of austerity is viewed as one of the main causes of the slump. In fact, the entire world is worried that Europe is the only continent that is recording no growth, and that it is cultivating the leitmotif of the clearance of public debt into an obsession. It is a policy that risks driving the European people to despair. […] Their discontent must be taken into account.

The dilemma confronting the Eurozone is not whether strengthening the fiscal consolidation is compatible with the eventual stimulation policies that are constantly running up against quid pro quos, but whether the hard and interminable adjustments are not strangling any prospect at all of recovery.

The Netherlands, “which are going through the worst economic period since the end of the War", have not dodged the downward trend either. Here, however, "consumers are escaping a severe recession," headlines NRC Handelsblad. With a fall of 0.1 per cent in the first quarter of 2013 compared to the same period in 2012, the daily explains, the recession that started in the third quarter of last year is still here. The daily’s analysis is based on the figures published by the Central Office for Statistics on May 14. While those figures may not be that dramatic, stresses NRC, thanks to a few "bright spots" –

External trade has been good, posting a growth of 1 per cent in first-quarter exports [...] But the really positive figure is household consumption. That represents almost half of GDP [...] and it went up by 0.4 per cent from the fourth quarter of 2012. This may not seem a lot, but it is the first time since 2011 that consumers have been spending a little more.

The ups and downs of the Eurozone have also had repercussions on the countries outside the zone. In the Czech Republic, for example, the crown has suffered a backlash, losing 6 per cent against the euro since September 2012 notes Hospodářské noviny in Prague. For the economic daily –

the contraction of the economy of almost 2 per cent of GDP in just one year is a nasty surprise. What’s more, the Czech economy has lost its last prop – exports.

“Europe’s suffocating,” headlines Gazeta Wyborcza, which pins the blame squarely on the policy of austerity: “Belt-tightening is driving us into recession,” warns the daily, as Poland’s statistics office announced that the country’s economy grew only by 0.4 per cent year-to-year in the first quarter of 2013 – the worst result in the last four years, and following six successive quarters of recession in the Eurozone. GW quotes ING Chief Economist Mark Cliffe, who believes that “if the current strategy of belt-tightening is continued, we’ll see more countries going bankrupt.” The daily notes that the economic situation is particularly bad in the countries that have introduced the strictest austerity measures, such as Spain, Italy, Portugal, Cyprus, and Greece.

European leaders, particularly the Germans, have long argued that saving is the key to overcoming the crisis. True, the strategy of belt-tightening has resulted in lower budget deficits, but at the same time it has led to deterioration of the economic situation and social frustration.