The centre-right coalition have made history by holding onto power in this weekend's election, but what no one saw coming was the emergence of the 'angry white men' of Sweden's far-right as serious players 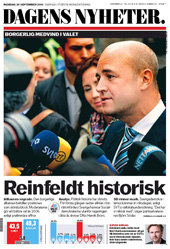 The long awaited victory of the centre-right coalition in general elections on 19 September is a major turning point in Swedish political life. However, the unexpected upsurge in support for the extreme-right Sweden Democrats — which took 20 seats in parliament — has alarmed the Swedish press.

“Reinfeldt’s historic victory,” was Dagens Nyheter's summing up of the election, which saw the centre-right Alliance led by the country’s outgoing prime minister become the largest bloc in parliament with 49.3% of the vote. For the first time ever, the right has been re-elected for a second consecutive term in office, although it does not have an outright majority. According to the daily, the result will bring about “the end of an era” marked by “the preponderant role played by the Social Democratic Party”. With only 30.9% of the vote, “the Social Democrats will no longer be the dominating force in all spheres of Swedish political life, and this represents a victory for democracy in our country”.

In its analysis, Dagens Nyheter notes that “Fredrik Reinfeldt has shown that the right has the capacity to offer good governance which does not undermine the welfare state,” and further asserts that “Reinfeldt’s policies for full employment and his exemplary management of the economic crisis were the main factors for voters who entrusted him with a second term in office.”

For Aftonbladet,the “catastrophic showing”by the Social Democratic Party is a testament to “public incomprehension of the Social Democrats’ criticism of the Alliance’s tax reduction policy, which had no trouble accepting most of the specific measures it entailed.”

However, as Dagens Nyheter points out, the undermining of the Social Democratic Party has also heralded the arrival of 20 extreme-right MPs in parliament. “The Swedish Democrats have succeeded in attracting disappointed male Social Democrat supporters and obtained 5.7% of the vote. For the newspaper, “the fact that the Sweden Democrats will now hold the balance of power is to deplored. However, the constitution will ensure that a minority government led by Fredrik Reinfeldt will not be devoid of options. And in the event that the situation proves to be unworkable, the Alliance will be able to deploy a number of solutions to neutralise the influence of the racist party.”

Expressenhopes that the most likely outcome will be Green Party participation in the future government. The daily argues that “Fredrik Reinfeldt ought to reach out to the Greens” and “should not think twice about accepting their support” if all he has to do is “to hand over the Ministry of the Environment” or pledge to increase the price of petrol.

Aftonbladet, however, declares that "the nightmare scenario has now become a reality". According to the daily, “everyone in Sweden stands to lose out” from the fact that “Reinfeldt’s government will likely depend on a racist party. Sweden will find itself in the same situation as Denmark, where the right has opened a door for the Dansk Folkeparti to enter the corridors of power.”

At the same time, Dagens Nyheterremarks that the emergence of the extreme-right is a phenomenon that has been observed in other European countries. “The Swedish Democrats like to compare themselves with Pia Kjaersgaard’s Dansk Folkeparti in Denmark, and Geert Wilder’s PVV Party for Freedom in the Netherlands. They have a lot in common in terms of policy: xenophobia anddesire to promote anti-Islamic sentiment. However, the Swedish Democrats have one unique distinction — the fact that their party was originally a racist movement — which makes them even more extreme than their European counterparts,” concludes Dagens Nyheter. "