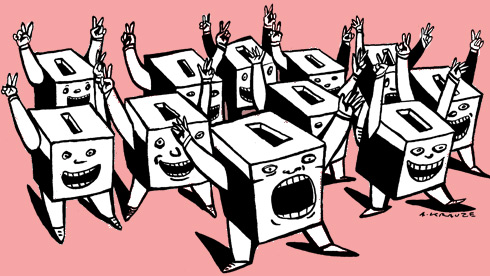 Fears of a growing protest vote

The success of Europhobic parties in member states will likely pave the way for a surge in support for Eurosceptics in next May’s European elections. Their favourite topics — immigration, austerity and the rejection of Brussels — already dominate the campaigns.

The breakthrough by Germany’s anti-euro party, the far right push in Austria, the pressure exerted by Nigel Farage’s Europhobes on the British Conservative party, and the anti-austerity drubbing sustained by the ruling party in Portuguese local elections: all of these amount to a preamble for May 2014 European elections in which hostility to Brussels’ orthodoxy will likely have a major impact.

In addition to the traditional anti-immigration and anti-Brussels votes, which have fed Euroscepticism in previous elections, anti-Merkel and anti-troika groups, which have thrived amid the euro crisis and repeated austerity programmes, stand to make a strong showing. Different political strands are often intertwined on these "protest" fronts. The eurosceptics are worried about growing immigration, while austerity has encouraged rejection of a Europe ruled by liberal economics.

In a context where ruling parties are more concerned by national votes than by low-turnout European ballots, the protest parties are counting on the elections on May 22 and 25, 2014, to establish their influence. What is more, the surge in their support will come at a time when the European Parliament has won greater powers, notably with regard to its choice of the president of the future Commission.

The leader of the UK Independence Party (UKIP), Nigel Farage, has made European elections a priority in his bid to impose his views on the United Kingdom, which will open a new chapter in the battle of wills with Brussels. They are also a key objective for the True Finns and France’s Front national (FN), as they are for Beppe Grillo in Italy, and SYRIZA, Greece’s main opposition party. All of these groups are hoping to be the focus of a protest vote, which is more pronounced in EU polls. "European elections have traditionally favoured marginal parties,” explains political scientist Dominique Reynié. “They are characterised by proportional representation and a high level of abstention, especially among moderate voters."

The ingredients of the protest cocktail are well known: immigration, bureaucracy and austerity. And at times they can form a highly volatile mix. The controversy in France over the Roma has shown that immigration – to Europe and also within the EU – will loom large in the campaigns. The question of migration is the stock and trade of the far right in countries as far apart as Denmark and Greece, as well as in the Netherlands, Austria and France.

The issue has also been enthusiastically adopted by the Eurosceptics of UKIP and Germany’s newly created anti-euro party Alternative for Germany (AfD). For a section of the European population that is apprehensive about the crisis, free movement of labour is seen as menace to employment. [[Romanian and Bulgarian workers have come to represent a threat that used to be embodied by the dreaded Polish plumber]].

Euroscepticism stands to benefit not only from attacks on Brussels bureaucracy, but also from criticism of the poor management of Europe’s financial ills. "Ever since the onset of the debt crisis, the countries of the south have been convinced that what is happening to them is Berlin’s fault, while the countries of the north believe that they have to bailout the south because of Brussels," explains European People’s Party (EPP) MEP Alain Lamassoure. The True Finns view aid to Greece as a justification for their Euroscepticism, as does Geert Wilders’s Party for Freedom which scored 30 percent in the polls.

Alongside these traditional opponents, the crisis has paved the way for the emergence of anti-Merkel and anti-troika groups which are thriving both on the left and the far right in southern Europe. In Greece, SYRIZA and the populist Independent Greeks are counting on the widespread rejection of measures imposed by Brussels and the International Monetary Fund (IMF) in order to gain ground in Strasbourg. In Spain, the Indignados movement has promised to present lists for the May vote.

"The European project is facing a very serious risk,” acknowledges the Vice-President of the European Parliament and Greek socialist party (PASOK) MEP, Anni Podimata. Anti-European sentiment has got much worse. And this should encourage the parties to take responsibility for their European message."

To date, the widely divided Eurosceptic movements and far-right parties have carried very little weight in the European parliament. MEPs representing France’s FN are not included in a parliamentary group, while the other movements form part of the Europe of Freedom and Democracy Group centred on Nigel Farage and the members of the Northern League. The FN’s dream is to create a group with the Austrian FPÖ, which recently scored more than 20 per cent in September 29 general elections.

"There will be a quarter to a third of MEPs who vote "no" to everything, but that will not prevent the parliament from functioning. The entente between the EPP and the social democrats will be even more necessary," points out Mr Lamassoure. The two parties have announced that they will conduct campaigns that oppose the right and the left. However, the launch of the social-democratic campaign has coincided with the SPD’s decision to consider participating in the Merkel government.