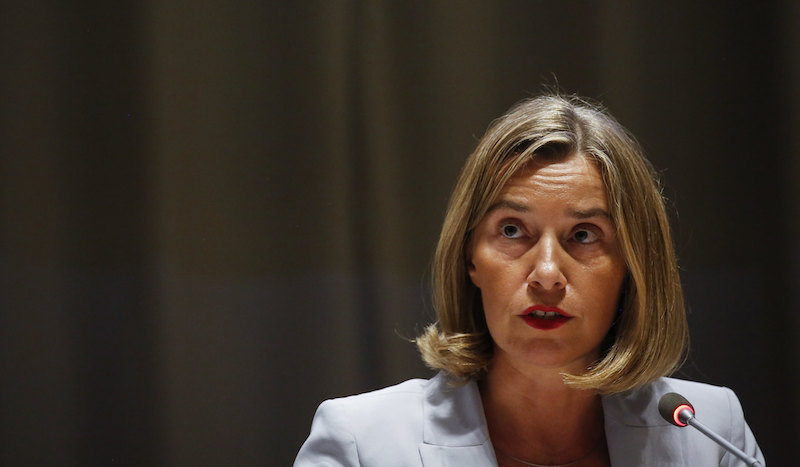 Federica Mogherini: ‘Crises such as Covid-19 are a reminder why we are together as a Union’

In the first episode of the new series of Burst the Bubble, the alumni of the College of Europe interview Federica Mogherini on the topic of crisis-management lessons in the light of Mogherini's own experience and the Covid-19 pandemic.

Since September 2020, Federica Mogherini is the Rector of the College of Europe. Previously she has served as the High Representative of the European Union for Foreign Affairs and Security Policy and Vice-President of the European Commission. Since January 2020, Federica Mogherini also co-chairs the United Nations High-Level Panel on Internal Displacement. In the first episode of the new series of Burst the Bubble, the alumni of the College of Europe interview Federica Mogherini on the topic of crisis-management lessons in the light of Mogherini's own experience and the Covid-19 pandemic.

Cornelia Lillis, Angelica Mastro: Although this pandemic has ultimately pushed the youth to seek common solutions to common problems, does the initial lack of solidarity between member states not point to the shortcomings of the EU's crisis management capacity?

Federica Mogherini: I think that everybody has realised in Europe in this last year that it does make a difference being part of a Union like that or not.

Because both from an economic and financial perspective, but also from a purely sanitary perspective, if you look at the vaccination plans, if you look at the provisions in terms of medical equipment, but even the solidarity when we were in need of moving patients from one hospital to another or one country to another, we have seen that being part of the European Union family does have an impact, a direct impact on our citizens lives and so I think we've seen the added value of it.

And I have to say, as a European, I was proud of how the European Union reacted and I think the rest of the world has looked at that, somehow envying us a bit, that we had the safety net that they didn't have at the time and I think that many are getting some inspiration out of it.

Let's focus specifically on perceptions and member states of the European Union. Obviously, the EU's initial reaction to the coronavirus pandemic greatly shaped public opinion. I'm thinking of countries such as Italy, where there was a strong feeling of a lack of solidarity from fellow European states which had actually previously emerged during the Eurozone crisis. So it seems those same wounds were somewhat reopened with the coronavirus pandemic. Do crises like these not inevitably hurt the Union in the long term by fueling Euroscepticism?

I think that the shortcomings were more on the narrative than on the policies. The European Union is sometimes very good at doing things and not so good at telling things that we do. And indeed others in the world, to the contrary, have a very strong narrative, some might even call it propaganda out of very little action. And we have seen in the very initial weeks of the pandemic last year that many were showing solidarity much more than they were practising actually solidarity.

In Italy in particular, you've seen planes coming from all over the world and you have not really seen the images of the EU flag coming, even if actually what the European Union was doing already back then was much more than what was shown on TV. This to say that indeed in Europe, we have a lack of, I would say, of pride in what we are doing as a Union and I think this is one of the shortcomings of our self-confidence, of our narrative.

If there is one element, one loophole that has been addressed a little bit late, this has been, I think, the coordination on the borders, the decision on what to do with the movement of citizens. But again, the level of uncertainty in which the institutional framework had to operate was really high, which is what characterizes normally crisis management; challenges that you don't really know what comes next, you don't really know what the environment is, you are operating a little bit in the dark.

So if, as you were saying, maybe the EU is slightly weak on the narrative side in promoting a positive self-image, it is clear, however, that the importance of being part of the EU is only really highlighted in times of crisis. So in this way, crises truly touch upon the EU's identity. They seem to form an existential part of the EU's identity. As we've seen historically, crises have acted as drivers of integration. So if this is the case, does the EU need or even rely on a narrative of crisis in order to push or legitimize its action, perhaps, is the EU only surviving because of crisis, giving the European project meaning?

Indeed the European Union comes out of a crisis. It's always a make-it-or-break-it moment. The Brexit referendum was a moment where the European Union, at the end of the day, was reinforced somehow. Many were betting at the time that would have been the beginning of the end for the Union and instead, it has been, I think, a reminder to us all of what we risk to lose if we go too far in the anti-establishment or Anti-European approach.

So indeed the crisis we are facing, and we are definitely not lacking crisis these times, are reminders of why we are together and I think this is the same for our union, it's the same for families, for communities.

You realize that you need others sometimes to literally survive, like in this case. And in other cases, you just realize that together you are in a better place. You can rely on a solidarity network and you can share.

👉 The full interview in the podcast episode 3 of Burst the Bubble at the beginning of this article.