Ideas Referendum on refugees in Hungary 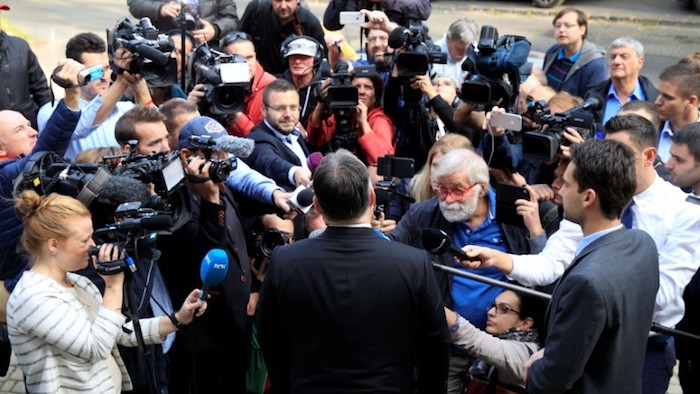 Ideas Referendum on refugees in Hungary

The 2 October referendum is invalid after failing to reach the minimum turnout. Even though the ‘no’ campaign against refugee quotas won massively, the Prime Minister has been thwarted for the first time since 2006, says opposition daily Népszabadság a few days before being shut down.

Reuters |  Hungarian PM Viktor Orbán talking to the press after having casted his vote on the 2 October referendum.

A campaign that hoovered up more than 10 million forints (over €30 million) and propaganda that took over all the media outlets close to Orbán’s Fidesz party were for nothing. Instead of 50% and one voice, only 43.3% of Hungary’s 8.2 million voters gave a valid vote for the 2 October referendum on the allocation of refugee quotas.

Even though 98.3% voted ‘no’ to the question posed by the government on quotas (and more generally on foreigners), the right did not gain more support than in the vote of spring 2014, when Fidesz-KDNP and Jobbik received 3.285 million votes. These same parties supported the ‘no’ vote, while the MPs who came forward were also basically the same.

But what was truly at stake in this referendum – given its lack of legally binding consequences – consisted in finding out whether the current government had managed to win over new voters by fomenting anti-migrant hostility. It has not succeeded. At the very most, it has taken some votes away from Jobbik – and so this counts as a defeat. A few days before the referendum, Fidesz representatives, working on the basis of unpublished opinion polls, began lowering expectations. Yet on Sunday evening, they claimed a crushing victory.

In the days since, it has already become clear that things are not going as planned. First, the head of Fidesz’ MPs Antal Rogán claimed that three million votes for the ‘no’ campaign nevertheless sent a strong message. Then, Viktor Orbán argued that participating in the referendum only had an emotional value. After voting on Sunday, the Prime Minister even said he would be satisfied if the ‘no’ votes won over those for ‘yes’, before going on to joke about quitting if ‘yes’ were to win. Only the tiny Liberal Party, headed by Gábor Fodor, supported him on that front. But this was not enough to motivate Hungarians to vote.

And there was another unusual development. During the last few days of the campaign, the PM tried to mobilise the population through interviews given only to outlets that were on his side. He did not hold any meetings, nor did he attend any citizens forums organised in 200 stations across the country, where many right-wing figures – including security experts terrified about UFOs – explained to audiences that immigration is destroying western civilisation.

Even during the referendum on EU and NATO membership, the participation rate never reached 50%, but it was superior to last week’s vote. Fidesz has walked into a trap of its own making: its own rules made it virtually impossible to win a valid vote. In the past, the unanimous vote of a quarter of the voting population (two million voters) was enough to claim victory – a threshold which the government would have easily reached on Sunday. It is for this reason that the joy of Hungary’s opposition parties – who are calling for Orbán to step down – is misplaced. Their satisfaction is nevertheless understandable when you think that this is the first vote since 2006 that has not gone the way Orbán wanted.

The situation is different if you conceive of the referendum – and of xenophobia – has a magic trick Fidesz has been conjuring for months to mold public opinion. If it wanted, Fidesz could – with Jobbik’s support – formally reject mandatory quotas despite the invalidity of the referendum. It could even do so without one, and in his “victory” press release, Orbán announced that is what he will do. But if his plan goes ahead, the Hungarian government will very likely have to face down infringement procedures from the Court of Justice of the European Union.

Orbán is continuing his belligerent rhetoric by announcing new battles, claiming that Brussels too must accept “the decision”. His argument already seems mapped out: he boasts that Sunday saw 200,000 more votes for ‘no’ than for joining the EU. Orbán claimed this to be a magnificent achievement, stressing that the turnout exceeded the last elections for the European Parliament by 15%.

There are nevertheless other figures worthy of attention, and which Orbán has not mentioned: 200,000 spoiled ballots. A figure that will probably give political clout to the Two-tailed Dog Party (Kétfarkú Kutya Párt), which campaigned for a boycott. In Budapest, 11% of voters spoiled their ballot.