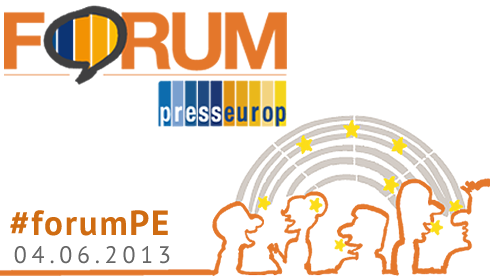 To add more depth to the discussions on our website and in preparation for next year’s European elections, we have organised the first Forum Presseurop: a series of debates on topics that have dominated recent headlines in Europe — the European institutional crisis, the euro crisis and its consequences, and the issue of European citizenship.

Moderated by Presseurop journalists, the debates will be held on June 4, at the European Parliament in Brussels. Participants will include a number of European MEPs – notably Vice Presidents Miguel Angel Martínez Martínez, Othmar Karas and Jacek Protasiewicz, plus Gabriele Zimmer head of the Confederal Group of the European United Left. The debates will also feature several journalists whose articles have inspired discussion on Presseurop — including Adriana Cerretelli, Bruno Waterfield, Jean Quatremer and Marek Magierowski — and some of our most ardent readers.

Live video of the debates as well as live tweets in 10 languages will be streamed on Presseurop.eu. Follow the discussion now on #forumPE.

9.30-11.00
The economic crisis and its corollary — austerity. What are the consequences — like the North-South gap — for the future of Europe?
Speakers: Gabriele Zimmer (GUE/NGL), Jacek Protasiewicz (EPP), Adriana Cerretelli (Il Sole 24 Ore), Jean Quatremer (Libération) and two Presseurop readers.