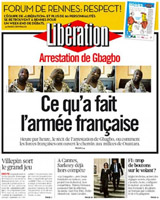 Libération reveals “the French army’s role” in the capture of Laurent Gbagbo by forces loyal to the new President of Ivory Coast Alassane Ouattara. Debate over French involvement in the West African country has grown heated in the wake of the arrest of the former president in Abidjan on 11 April.

Before he was elected, “Nicolas Sarkozy solemnly announced an end to Françafrique [special ties between France and African states], but many commentators are arguing that his direct and active involvement in the Ivorian crisis is an unwelcome interference worthy of the period when the African bureau in the Elysée decided the political future of the negro kings,” remarks the Burkina Faso daily L'Observateur Paalga quoted by Slate Afrique.

For its part, French newspaper L’Humanité quotes American diplomatic cables published by Wikileaks in 2010. “As part of a new deal put forward by Nicolas Sarkozy, Françafrique and the relationship between France and its former African colonies would be adapted to reflect a new international context resulting from globalisation.” According to the American diplomats cited by the communist daily, “France is seeking 'to involve the EU in crises’ like Chad and the Central African Republic with EUFOR. It also wants to ‘develop the role of the UN in crisis management, a process that has already been established in Ivory Coast. With this strategy, ‘the French can hide behind a European or UN screen, points out the document.”

For L’Humanité, “One thing is certain: Bolloré, Total, Bouygues and other French telecommunications companies can heave a sigh of relief; as a political analyst explained in a business daily a few days ago, ‘French investors can still look forward to a bright future in the Ivory Coast’.”

From now, Libération argues the political cards should be left in Ivorian hands: “So it goes in the Ivory Coast, formally decolonised since 7 August 1960. Alassane Ouattara, who stands accused by enemies that make poisonous use of Ivorian nationalism of being the pawn of foreign power, will have to confirm his independence as soon as possible. The first test of his autonomy will be how he handles the fate of his defeated enemy along with his supporters and partisans. (…) It’s up to the Ivorians to embark on a difficult path between memory and reconciliation, and between justice and the need to live together.”