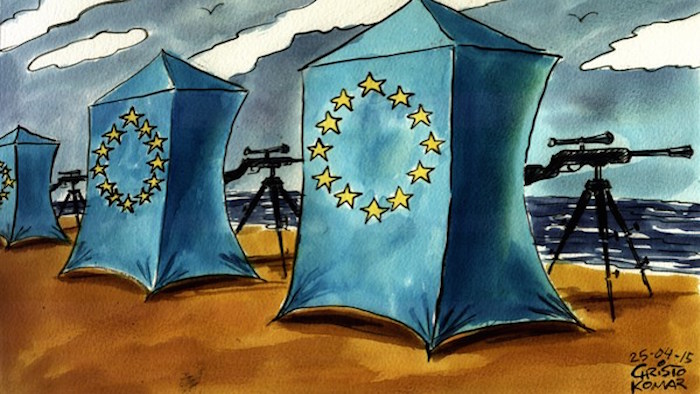 The European Union is reinforcing the agency charged with watching over its external frontiers as it tries to stem the flow of refugees and immigrants who seem to threaten it. But Frontex has not only struggled to put the breaks on illegal immigration, it has also been criticised by the European ombudsman and by campaigners for the way it handles expulsions.

EU member states, who founded Frontex ten years ago, have succeeded in creating a non-existent enemy and have reinforced the notion that a military approach to questions of immigration and asylum is not only just, but also inevitable.

If we have begun to talk of military operations against people fleeing war and misery (which is exactly what the countries of the EU are preparing to do in Libya by conjuring up the spectre of traffickers working together with Islamic State), it is because Frontex has perfectly played the symbolic role European governments gave it. The same goes for its role of "*managing international coordination on the external borders" of the EU's member states set out in its mission.

Created by a Council of Europe ruling in October 2004 and operational since 2005, Frontex helps member states to control their external borders more effectively and to repatriate irregular migrants. To carry out this task, Frontex was given a broad operating margin by European governments: it does not have to report on its activity and is free to disregard the fundamental rights of people caught at borders of the EU or expelled from European territory.

On 6 May, the European ombudsman Emily O'Reilly presented the conclusions of her enquiry on the forced repatriations coordinated by Frontex, in particular on respecting the fundamental rights of expelled people.

Speaking of respecting fundamental rights during an operation of forced repatriation is a little like discussing the most civilised execution methods. Forcing someone to leave their country of residence and return to a country where he or she cannot live constitutes by definition a violation of that individual's fundamental rights. People could of course argue that a state has the right to decide who is permitted to live within its territory. But can it use violence to ensure compliance?

Emily O'Reilly's conclusions clearly illustrate the stages of joint repatriation operations, when multiple member states organise a flight to a given country with each providing a quota of people to expel (on this kind of quota, at least, member states very quickly work out how to come to an agreement). They also reveal all the ambiguity of Frontex's role.

European governments have given the agency the task of making expulsions from the EU easier (one of the key points of the migration agenda presented on 13 May by the European Commission, which hopes to modify "the juridical basis of Frontex to reinforce its role in repatriation.") But at the same time it is pressured by other institutions, in particular the Parliament, the ombudsman and the European Court of Human Rights, to keep a certain respectability in its actions, even if this is only superficial.

Frontex has adopted several techniques to reach this delicate balance: pushing responsibility for its actions onto the Commission or on member states; banking on a seductive communications campaign (like a 2014 publication called "12 seconds to decide"); ignoring recommendations made to it or only applying them superficially.

Emily O'Reilly, for example, has said she is "profoundly disappointed"by the fact that Frontex did not follow up on the recommendation, made in April 2013 by her predecessor Nikiforos Diamondouros, to create a mechanism for directly managing claims of people who believe their fundamental rights have been violated by a Frontex operation. A mechanism of this type would impede the work of the agency, so it is unsurprising that Diamandouros' recommendation came to nothing. It will be interesting to see which of Ms O'Reilly's recommendations Frontex will adopt, and to what extent.

Beyond these attempts to 'humanise' the agency, in the past few years a number of collectives and associations have sprung up to denounce its very existence. Protests were initially centred around Warsaw, where Frontex has its headquarters, and in Greece, whose border with Turkey had been described in a report from 2014 as a "laboratory for Frontex's activities". But they have spread across other EU countries through campaigns like Frontexplode and Frontexit, and initiatives like the Anti-Frontex days currently taking place in the Polish capital and in other European cities.

On 16 May, Watch the Med, a network of campaigners that provides assistance to people in danger in the Mediterranean through an emergency number, published a video in which it puts forward "ten points that would truly put an end to deaths in the Mediterranean."

As long as migratory movements are presented as a security threat and not as a phenomenon linked to work, family regroupment and human rights, Frontex will continue to grow and to expand the market for surveillance technologies. People will continue to die at the borders of the EU. As for us, we will continue to be led along by our governments into ever-less imaginary wars.