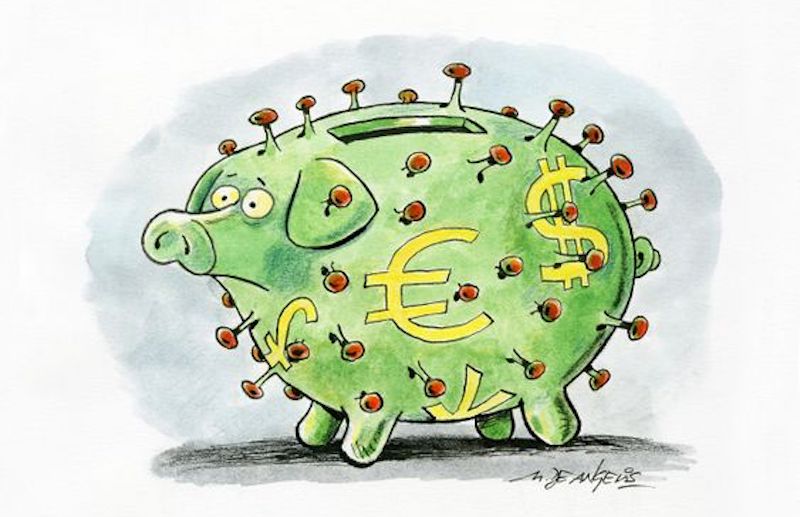 In this follow-up of the first German-Italian call for coordination and solidarity at the European level on dealing with the coronavirus crisis, several pro-European personalities call for a unified tax policy, and for curbing money laundering at the continent's scale.

The Corona Virus epidemic and its consequences for our societies and economies pose a challenge for all of us unprecedented in the history of the European Union. We are glad that in both our countries the spread of the virus is now under better control. A number of restrictions of the public life and economic activity could already be lifted. However, this does not mean that the end of this crisis is in sight. We are now entering a new phase. Companies of any size have been hit hard either by a complete stop or slow-down of their activities.

One thing should be clear, when we debate the restart of our economies in Europe: This crisis hits all countries simultaneously and no single country is in this crisis because of bad economic or fiscal policy choices of the past, but because of a terrible pandemic. That is why we need to shoulder the burden of this crisis in Europe together. We therefore repeat our call for the issuing of European Health Bonds with a clear and defined common objective and subject to jointly agreed guidelines. Without burden-sharing, we would not only risk the stabilisation of the health system and the economic recovery of some countries, we would put the entire internal market at risk and with it our project of unifying Europe.

There is no doubt that the recovery of our economies demands an unprecedented amount of public money. At the same time tax revenues of our states dramatically decrease due to the economic crisis. Even if the resulting increase of new public debt is justified it would be irresponsible to forget the revenue side of public budgets. Increasing taxes is not a good guardian for economic recovery. Therefore, we should first and foremost concentrate on generating resources by curbing tax dumping, tax fraud and money laundering. In the past a lack of European unity has limited progress towards a common tax policy and a determined fight against financial crime.

More : European solidarity now, in the interest of all

1. Europe needs a common minimum effective tax rate on corporate income. If international efforts in the framework of the OECD do not come to an agreement as foreseen by the end of this year, the EU has to set its own minimum effective tax rate. This rate should be applied to large corporations on the basis of a common consolidated corporate tax base (CCCTB). These should also publicly disclose profits and taxes paid on a country by country basis as suggested by the European Commission and supported by the European Parliament.

2. During the Corona Crisis digital business models have gained market shares from traditional businesses. This push towards digitalisation may well boost useful innovation. At the same time the competition is not fair if large digital companies pay hardly any corporate income taxes in Europe while traditional companies do. This is why Europe should introduce a common approach to digital taxation which ensures that profits made in Europe are also taxed in Europe on a fair basis. Until a corporate tax reform is in place, the digital taxation proposal by the European Commission and supported by the European Parliament should come into force as soon as possible.

3. A lack of resources and mutual trust between Europe‘s tax administrations is the basis for large scale cross-border tax fraud in VAT of about € 50 billion and dividend arbitrage. It is high time for the currently blocked VAT reforms to be adopted by member states as well as a European response to dividend arbitrage to be drawn up.

5. Curbing money earned through criminal activities is a boost for citizens‘ security as well as for honest businesses. Fighting money laundering will also generate additional public revenue. Public revenue lost according to the EU Commission is of a staggering €160 billion per year. According to Europol only 1% of criminal money is being seized. Italy has demonstrated that member states can be successful in this domain through legal reforms which should be copied all over Europe. But in any case, Europe also needs an effective money laundering supervisor and regulator. For the large scale cases of financial crime a European financial police should be created in the framework of Europol.

As tax policy normally needs a unanimous decision by all EU member states, progress towards tax justice is notoriously slow. Also common decision making in matters of security cooperation are difficult. But, there is room for maneuver. Measures for corporate transparency and against money laundering are decided by majority voting. Furthermore, the European Commission could use Article 116 TFEU as a legal base for potential future tax legislative proposals if competition in the single market is distorted and if no agreement has previously been reached between the Member States.

The level of tax competition in the European Union is such that the new European Commission has already indicated seriously looking into this option, which would guarantee equal decision-making power to the European Parliament. It is high time to use this option. Lastly, member states should foster cooperation in global and multilateral institutions to promote international decisions for tax cooperation.

This crisis demands determined decisions for fairness and efficiency on the income side of public budgets. The time to act is now.

On Monday, 8 June, from 5 to 7 PM CEST, the authors will discuss their proposal in a public webinar with the European Commissioner for the Economy, Paolo Gentiloni. Register here.