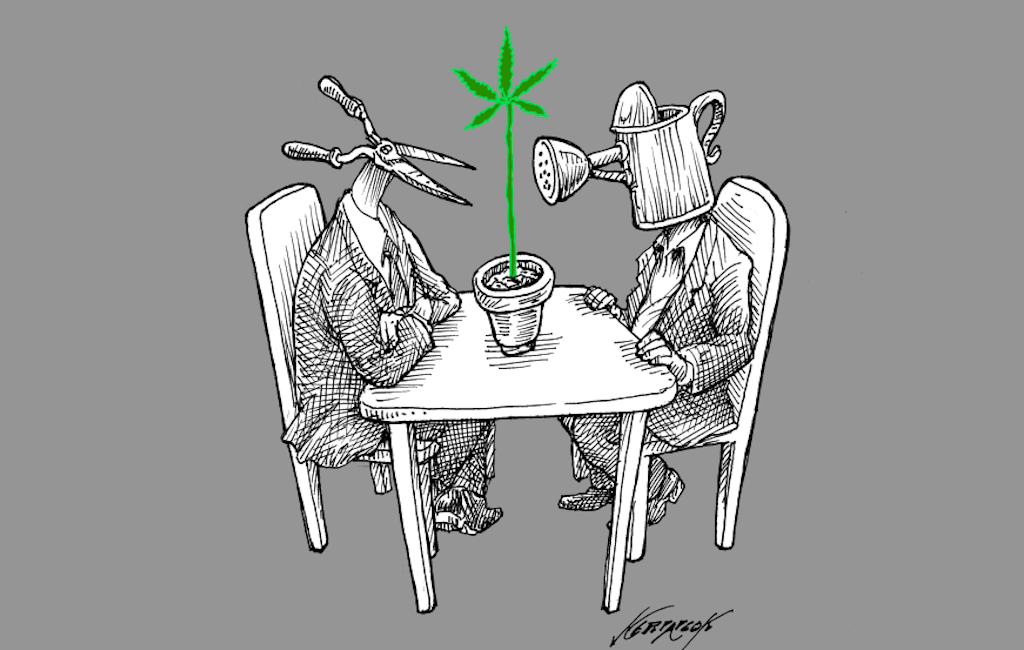 After Germany announced its intention to legalise and regulate the recreational use of cannabis, the European Union finds itself in a difficult position. Voxeurop looks at how Germany’s initiative will affect the approach of other governments and the legal position of the EU.

The war on drugs has failed. There is nothing new in the claim, even if European leaders are taking a lot of time to acknowledge it. Indeed, it is the widely shared consensus among drug-policy experts. Never have illicit drugs been so widely available and used by so many people in the world, despite more than four decades of prohibition and often harsh prison sentences.

A growing number of Europe’s governments are reconsidering their treatment of cannabis. To the point that the European Union's “national competence” argument and its approach of turning a blind eye to cannabis decriminalisation is beginning to look short-sighted.

Voxeurop has looked at the legalisation of weed in the EU's largest member state, Germany – with its location at the heart of Europe, its population of 85 million, and its 4 million cannabis consumers last year. How will Germany’s initiative affect the approach of other governments and the EU?

Control it, tax it, ban advertising, make harm-reduction services widely available, stop stigmatising consumption, and ensure packaging and access are safe and only available to adults – across the world, these are the cornerstones of all recent evidence-based government attempts to regulate recreational cannabis.

For years, the EU institutions have looked the other way or pretended not to hear when asked about cannabis legalisation. In 2011, the author asked Viviane Reding, then EU Commissioner for Justice and Home Affairs, about the EU's attitude to the US states that were pioneering legalisation and regulation of cannabis. As always, she replied that it was not an EU competence, it was a health issue, and so on.

However, since then a lot of water has passed down the Rhine. Following an election promise to legalise by Germany’s liberal-left-green coalition, the Berlin government started to rev the motor this year, if only slowly. First came a number of expert hearings, announced by Germany’s Commissioner for Addiction and Drug Issues, Burkhard Blienert. Then, in late October a draft proposal – “Eckpunktepapier” – was published, detailing a plan for a recreational-cannabis market. It will be followed by a bill in the Bundestag in the first half of 2023.

Last year the Netherlands was frustrated in its attempt to solve the problem of wholesale cannabis – dubbed the "backdoor problem" – by the prospect of triggering an EU-law infringement procedure. Unperturbed, Berlin is planning to keep the European Commission on side. According to the Eckpunktepapier, Plan A is to obtain the approval of the EU institutions.

In the proposal, presented by German health minister Karl Lauterbach, the idea is to bypass the legal hurdles of the UN drug-control conventions and EU law by simply issuing an "interpretative declaration". However, according to a legal analysis published by the Transnational Institute (TNI) in September 2022, the Germans are choosing a delicate path, and not one of the three or four viable methods identified around the world. According to the TNI, countries such as Uruguay, Malta, Canada, Mexico and most recently Colombia have opted for better solutions.

This is important, because all three UN drug conventions contain provisions on cannabis. The 1961 Convention names the cannabis flower and resin, the 1971 Convention mentions THC, the psychoactive compound in cannabis, while the 1988 Convention contains provisions on the cultivation and eradication of cannabis.

According to the German proposal, the aforementioned plan A is to submit the "interpretative declaration" to the European Commission in the hope of getting a green light. But if this "interpretative solution" does not pass – which most cannabis law experts are betting on given the lack of legal basis – the Berlin government has added a vague option B to its preparatory document. Namely, that the proposed legislation "be accompanied by a German plea for certain amendments/updates at the level of EU and international law".

Martin Jelsma, author of the paper “Cannabis Regulation vs international and EU law: Legal tensions and compliance options”, warns in his analysis that beyond the three UN conventions, there are three potential conflicts related to EU law lying in wait for the German cannabis-regulation plan.

More : How the pandemic has impacted drug trafficking

First, there is the question of whether obstacles arise from the Schengen Acquis and the opening of borders within the Schengen area. More specifically, how to deal with the 1990 "Convention Implementing the Schengen Agreement of 14 June 1985", which, in one of its chapters, calls for "adopting, in accordance with the existing United Nations Conventions, all necessary measures to prevent and punish illicit trafficking".

Second, a specific provision of a 2004 EU decision on harmonising penalties for drug trafficking requires EU countries to ensure that the sale of drugs is "punishable by effective, proportionate and dissuasive criminal penalties".

Finally there is the issue of how to connect the legal dots between the UN conventions and the EU’s laws.

Key points of the German plan:<…