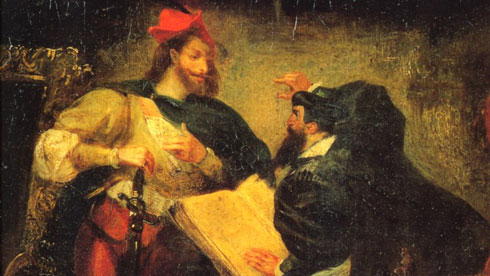 Germany’s pact with the devil

In Goethe's most famous fable, Faust, the German author demonstrates his opinion that paper money is a continuation of alchemy by other means. This view, argues The Irish Times Berlin correspondent, is clearly evident in Germany’s current stance on the eurozone crisis.

"Faust and Mephistopheles", by Eugène Delacroix (1826-27). The Wallace Collection (London).

For anyone struggling to grasp German attitudes to money and debt in the eurozone crisis, all roads lead to Frankfurt.

Germany’s financial capital is not just home to two central banks, the Bundesbank and the European Central Bank, but also a yellow, baroque building in the shadow of the ECB tower.

It was here that Germany’s literary genius, Johann Wolfgang Goethe, was born in 1749. Now a museum, the Goethe Haus is home to a fascinating exhibition, Goethe and Money (Goethe und das Geld), exploring how societal attitudes to money informed Goethe’s writing which, in turn, has shaped German attitudes to money.

Goethe was born with a silver spoon in his mouth thanks to a thriving family business and some advantageous marriages.
Though friendly with several banking families – Goethe almost married into one – losses sustained by institutions after the Napoleonic wars gave the writer a life-long suspicion of banks.

The writer’s household accounts show he was far from the frugal German stereotype, often spending 15 per cent of his annual earnings on wine. Bailouts from his mother and employers were a regular affair. As the exhibition curators note, Goethe defended his spendthrift ways as “crucial for the development of his personality”.

He was more stringent when he became finance minister of the duchy of Saxe-Weimar, around what is now the eastern state of Thuringia, from 1782. This experience shaped his thinking and contributed to the creation of his literary masterpiece, Faust, obligatory reading in all German schools, which centres on the notorious “Faustian pact” between the eponymous scholar and the devil Mephistopheles.

The devil promises to do Faust’s bidding on earth. But if Faust ever wishes for a moment in his life to last forever, Mephisto gets his soul.

The second part of Faust, published posthumously, opens in the bankrupt court of a hedonistic emperor. The royal treasurer reports that the “coffers are still empty”, as are the royal cellars thanks to regular parties.

The persuasive Mephistopheles turns up to propose, turning paper into money. The debt-burdened emperor is intrigued: “I’m sick and tired of how and when/We’re short of money so make it, then.” The notes signed by the emperor spark a consumer boom where “half the world seems obsessed with eating well/the other half with showing off new clothes”.

Only after Mephisto and his partner Faust vanish does anyone notice the value of the notes refer not to any real equivalent – gold in a vault, for instance – but to the promise of gold yet to be mined.

The parallels were not lost on Goethe’s contemporary readers, between the Faust fable and the capital needed to drive the industrial revolution. His warnings are once more relevant for countless German public figures who have seized on Faust to articulate their own concerns about the eurozone crisis.

The modern role of the emperor’s chancellor in Faust, who warns against the paper money scheme, has been assumed by Bundesbank president Jens Weidmann.

“If a central bank can potentially create unlimited money from nothing, how can it ensure that money is sufficiently scarce to retain its value?” he asked a Frankfurt audience in September. “The temptation certainly exists, and many in monetary history have succumbed to it.”

He warns that the ECB’s unlimited bond-buying programme to stabilise the eurozone is a potential Faustian pact if it offers politicians a more palatable financing alternative to painful economic reform.

The ECB argues that this is not the case and their differing views has revived a cultural ambivalence in Germany to money and debt. This is, after all, the country where the word Schuld means both monetary debt and moral guilt. The ECB’s bond-market interventions have been condemned by the same moralist economists who attack indebted euro zone countries as Schuldensünder or “debt sinners”.

So is there a link between attitudes today and Goethe’s Faust, described by German literary theorist Werner Hamacher as a critique of “credit aesthetics and persuasion economics”.

Former ECB executive board member Ottmar Issing suggests Germans are not doubtful about money itself, but pessimistic that it is ever used wisely. In an essay for the Goethe and Money catalogue, entitled Inflation – the Devil’s Work? Issing argues that “the choice between blessing and curse” offered by paper money “lies in the hand of humankind”.

Former ECB president Jean-Claude Trichet agrees. In another essay, he praises Goethe’s lifelong debate about the dual nature of paper money which “produces the best and the worst in the economic sphere”.

Living within your means

For Prof Hans Christoph Binswanger, author of the Faust study Money and Magic, Goethe saw paper money as “the continuation of alchemy by other means”. To transform paper money into real wealth, argues Prof Binswanger, Goethe worried that everything would be “dragged down into the smouldering process of world production”.

“The apparently magical modern alchemy bears a profane price, it transforms the world into nothingness,” he adds. Goethe’s fear has resurfaced in the widespread German view that the eurozone crisis is the destructive result of uncontrolled, careless borrowing by societies refusing to accept the natural limits of their finances.

Economic collapse is thus a common thread running through Germany’s national trauma and its national drama. Faust and Mephisto lurk in the wings of the euro zone crisis, colouring Berlin’s demands for pan-European fiscal discipline and sparking a debate in Germany on the limits of economic growth.

“Goethe saw that money, when used properly brings with it positive opportunity, such as the rise of his own family,” said Dr Vera Hierholzer, co-curator of Goethe and Money.

“At the same time, like many of his class, he had a fear of the consequences of excess and exorbitance, of always pushing for more. It is a very German view, even today, to see the limits and to try and control things within these limits.”

The debate about monetary self-control has a relevance beyond Goethe’s Germany, particularly among crisis countries impatient to cast off their troika yoke and “return to markets”.

Interestingly, some of Ireland’s last sovereign debt auctions were chaired by the late Brian Lenihan at the hulking Frankfurter Hof hotel, located halfway between the ECB tower and the Goethe Haus.

After regaining economic sovereignty, it’s up to Ireland where it goes next. In the direction of the Goethe Haus, heeding the limits of its financial means, or back to the five-star Frankfurter Hof hotel to host expensive breakfast meetings for banks happy to lend us more Mephisto money.