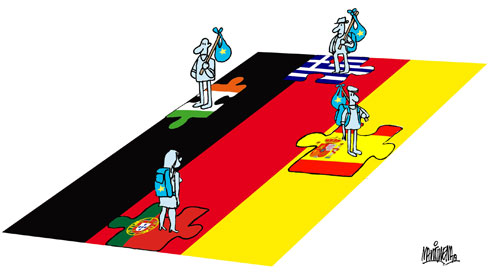 For the five million young unemployed Europeans, Germany, where the rate of youth joblessness is the lowest in Europe, looks like a promised land. While its system of dual training at the core of this success seems like a model for crisis-hit countries, it is not easily exported.

More than 5.5m young Europeans are without jobs. In the crisis countries in southern Europe, a generation is coming of age with few prospects: one in two Spaniards and Greeks under 25 are unemployed, and it's one in three in Italy and Portugal.

To them, Germany must look like an island of the blessed: youth unemployment here is below 8 per cent. In none of the other 27 EU member states is it this low. Only Austria is anywhere close (8.9 per cent).

How do they do it, our European neighbors ask – and even make pilgrimages to Germany to research the phenomenon. What they discover is our dual vocational training system – going to school (theory) and working (practice) simultaneously rather than consecutively. For most Europeans, that’s new: learning and working, instead of learning then working.

The European Commission has praised the German model as a "guarantee against youth unemployment and shortage of skilled labour." Even US President Barack Obama praised the German model in his 2013 State of the Union address: “Right now, countries like Germany focus on graduating their high school students with the equivalent of a technical degree from one of our community colleges, so that they're ready for a job."

For a long time, other countries criticised Germany for this approach – in fact, the OECD regularly upbraided us for having too few university graduates. For many international education experts, a university education – bachelor or master’s degree, doctorate – is the measure of all things. German “Meister” (master) certification is seen as rather exotic.

Practical training is considered to be notches below academic training. Equating an apprenticeship diploma with a high school degree, considering master certification to be on a par with a bachelor’s degree, is inconceivable for many Europeans. But slowly, word is getting around that German industry’s ability to innovate – and indeed its success as measured by the success of its products worldwide – might have something to do with the sound training German workers receive.

Even within Germany there are critics of the dual system. It has been said that the training is too specialised, too tailored to the specific needs of certain industries, and that the number of different specialties (more than 300) that kids can train for is way too high. Doubts have also been expressed as to whether dual-system qualifications can keep up with fast-changing economic times in our Internet era.

The system came under a lot of pressure about a decade ago when there was mass unemployment in Germany, and tens of thousands of young people were unable to get apprenticeships. In 2004, the red-green (Social Democrat/Green Party) government was even pushing for a training levy to force the economy to create more apprenticeships.

But then in June 2004, the German government joined with employers and business associations in pushing through the national Vocational and Educational Training Pact, which helped reverse the situation: now, supply is greater than demand.

The global economic crisis has turned the German model into an export hit. Germany has signed a training cooperation deal with six EU countries, and German companies are playing a pioneering role by training staffers in their subsidiaries abroad according to the German model.

Expectations are high – also for the Germans. Germany doesn’t only want to export a winning system, it’s hoping for dynamic, motivated southern Europeans to occupy all the apprenticeship slots that aren’t presently being filled – and who once they’ve got their qualification don’t head back home but stay in Germany to fill out the growing shortage of skilled workers.

Sceptics are quick to point out problems, like language barriers, and say they doubt whether migrants can play a determining role in alleviating the shortage of apprentices in Germany.

And it is true that the time-frame may not be ideal, as the German system is strongly dependent on the economy. The market, not education experts, is ultimately what determines the number of apprenticeships available. It is companies that decide how many positions requiring which qualifications they will need in the future; that is the basis for the number of apprenticeship positions they open up.

So the big advantage of the German vocational training approach is also its biggest drawback. The system is contingent on the economy – and in bad times, such as the crisis countries in Europe are currently experiencing, demand for apprentices will be lower.

That southern Europeans are looking for an answer in the dual system shows how desperate they are. They not only lack companies willing to create apprenticeship positions, and patient “masters” happy to pass on their know-how to “their” apprentices, but also the institutions, and close-knit cooperation that is required between employers, politicians, unions and other players to implement the dual training system successfully.

Even in Germany, where this collaboration is so well established, the system is still not without its own setbacks, such as the conflict over the Training Pact and the resistance from the unions.

So southern Europeans adopting the German system have undertaken something highly ambitious. But it’s better to push for courageous structural reform rather than opt for the simpler solution of giving young unemployed people senseless occupational training just to keep them busy – and quiet. That deserves our support. As do young southern Europeans who are leaving home to come to Germany to find a job or receive vocational training. We should welcome them with open arms.