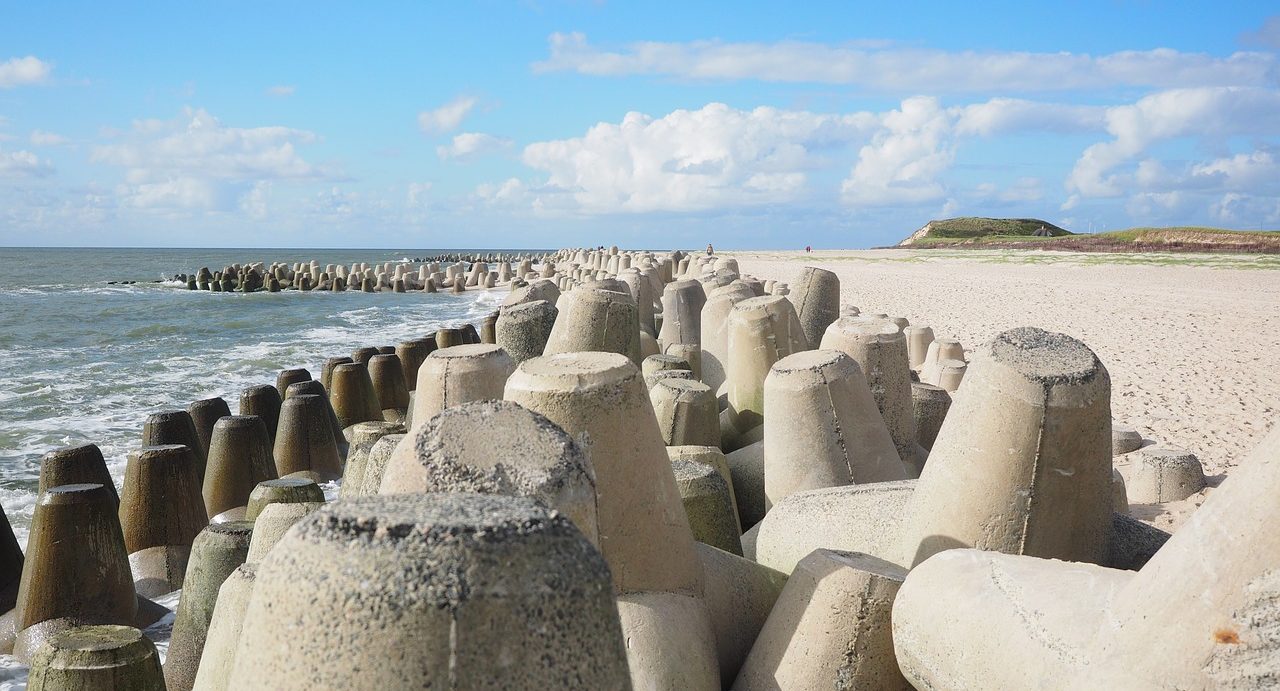 The data on global warming suggests that many seaside resorts in Atlantic and Mediterranean Europe could lose their beaches due to sand erosion caused by rising sea levels and human activity.

This summer, due to social distancing and other measures to prevent the spread of COVID-19, access to Europe’s beaches is more of a struggle than usual. However, by the end of the century a seaside holiday may be even more difficult, due to the effects of climate change.

Popular seaside locations along the Mediterranean and Atlantic could lose their appeal, as sea levels rise with the temperature. This will only add to the damage already done by humanity, and accelerate the erosion of sandy shores.

Among the highly popular beaches at risk are San Teodoro in Sardinia and Lignano Sabbiadoro in the Venetian Lagoon, the Greek islands of Lefkada and Lesbos in the Ionian Archipelago and the north-eastern Aegean Sea, Saint-Tropez on the Côte d’Azur, Santa Cruz in Tenerife (the Canary Islands), and those on the islands of San Jorge and San Miguel in Portugal’s Azores archipelago.

We have analysed the data generated by the European Commission’s Joint Research Centre, discussed in an earlier article. Specifically, we have calculated the average level of beach erosion in each municipality in the five EU member states with the most extensive shoreline and the most seaside tourism in Europe, namely France, Spain, Greece, Italy and Portugal.

From our elaboration of the data it emerges that in the top 100 municipalities with beaches most at risk, 60 are in France (more than two thirds in the regions of Poitou-Charentes, Lower Normandy and Aquitaine), 17 in Spain (almost all in Galicia, the Balearic islands and the Canaries), 9 in Greece (two thirds in the west and Macedonia), 5 in Italy (almost half in Sardinia) and 4 in Portugal (half in the Azores archipelago).

Along the French coast erosion could completely destroy the beaches of 387 out of 687 municipalities (56 percent), including overseas territories. In the remaining 28 percent of municipalities, the thinning of the sand ranges from a few centimetres to a critical level, while just 16 percent will see some expansion, thanks mainly to human filling in the most touristic areas. In Brittany’s highly popular Saint-Malo the beaches will recede by an average of 85 metres, though in certain areas could disappear completely. Looking at the distribution on the regional scale: the municipalities of metropolitan France where beaches will almost certainly be lost amount to 33 out of 49 in Aquitaine (67 percent), 42 out of 57 in Poitou-Charentes (90 percent), 86 out of 108 in Lower Normandy (80 percent), 7 out of 19 in Upper Normandy (32 percent), 90 out of 183 in Brittany (55 percent), 26 out of 34 in Nord-Pas de Calais (76 percent), 36 out of 49 in the Loire (73 percent), 7 out of 10 in Picardy (70 percent), 8 out of 59 in Corsica (14 percent), 15 out of 33 in Languedoc-Roussillon (45 percent) and 8 out of 51 in Provence-Alpes-Côte d’Azur (16 percent).

Along Spain’s coast, erosion could completely destroy the beaches of 101 out of 412 municipalities (20 percent), including Ceuta and Melilla in North Africa. In the remaining 46 percent of municipalities the thinning of the sand ranges from a few centimetres to a critical level, while at least 30 percent will see some expansion. In the popular region of Alicante on Costa Blanca, the beaches will recede by an average of 38 metres, but in certain parts could disappear completely.

At the regional level, on the Mediterranean the municipalities where beaches will almost certainly be lost amount to 18 out of 62 in Andalusia (29 percent), 9 out of 71 in Catalonia (13 percent), 8 out of 62 in Valencia (13 percent), 5 out of 9 in Murcia (50 percent), 12 out of 31 in the Balearic islands (39 percent). The municipalities threatened along the Atlantic amount to 27 out of 61 in Galicia (44 percent), 6 out of 18 in Cantabria (33 percent), and 12 out of 64 in the Canaries (19 percent). In the principality of Asturias, on the other hand, 5 out of 11 municipalities will expand, while the remaining 6 will experience a critical level of erosion, without losing their beaches completely.

Along Portugal’s coast, erosion is very likely to completely destroy the beaches of 69 municipalities out of 188 (37 percent). In the remaining 43 percent of municipalities, thinning will range from a few centimetres to a critical level, while 21 percent will see some expansion. In the popular region of Faro in the far south, the beaches will recede by an average of 37 metres, but in certain areas could disappear completely. At the regional level, the municipalities on the Adriatic coast where the beaches will almost certainly disappear amount to 3 out of 8 in Alentejo (38 percent), 11 out of 38 in the Algarve (29 percent), 7 out of 25 in the metropolitan area of Lisbon (28 percent), 20 out of 40 in the centre (50 percent), 18 out of 35 in the north (51 percent), and 10 out of 32 in the Azores (31 percent). On the other hand, all the municipalities in the autonomous region of Madeira will see their beaches expand.

Greece
Along the Greek coast, erosion could completely destroy the beaches in 188 out of 1005 municipalities (19 percent). In the remaining 74 percent of municipalities, thinning will range from a few centimetres to a critical level, while only 7 percent will see coastal expansion. In the popular islands of Mykonos, Ios, Paros and Naxos in the Cyclades archipelago, the beaches will recede by an average of 70 metres, but in other places will disappear entirely.

Along the Italian coast, erosion could completely destroy the beaches of 109 municipalities out of 584 (11 percent). In the remaining 74 percent of municipalities thinning of the sand will range from a few centimetres to a critical level, while just 7 percent will see coastal expansion. In the popular Rimini area, the beaches will recede by an average of 40 metres, but in certain places could disappear completely. At the regional level, the municipalities on the Adriatic coast where the beaches will almost certainly disappear amount to 3 out of 7 in Friuli-Venezia Giulia (43 percent), 5 out of 12 in the Veneto (42 percent), 7 out of 13 in Emilia Romagna (54 percent), 4 out of 25 in Marche (16 percent), 5 out of 16 in Abruzzo (31 percent), 2 out of 4 in Molise (50 percent), 6 out of 67 in Puglia (9 percent). The municipalities threatened on the Ionian coast amount to 3 out of 8 in Basilicata (38 percent), and some of the 12 out of 114 municipalities in Calabria (11 percent); on the Tyrrhenian coast, apart from Calabria, they number 4 out of 42 in Campania (10 percent), 6 out of 23  in Lazio (26 percent), 5 out of 33 in Tuscany (15 percent) and 3 out of 47 in Liguria (6 percent). In Sicily and Sardinia, the number of municipalities with beaches likely to perish are, respectively, 20 out of 111 (18 percent) and 24 out of 62 (19 percent).

The Joint Research Centre study calculates net beach erosion by combining three factors: besides the rise in sea levels due to climate change, they take into account the intensification of storms, and man-made barriers along the coast (buildings, roads, dams) which have drastically reduced the natural flow of material to resupply the beaches. The study also takes into account debris which comes down the rivers following human activity or natural causes, as well as rising soil levels which can in certain cases compensate for erosion and lead to coastal expansion. The researchers tracked a variety of forecasts according to the climate scenario (high or low levels of gas and greenhouse emissions) and time periods (2050 and 2100). The greater the quantity of greenhouse gas emitted by the global economy, the greater its contribution to global warming and thus rising sea levels (through thermal expansion and melting ice).

The data generated by the researchers quantifies the level of beach erosion which would occur in the interior if there are no physical barriers to stop the advance of the sea. Thus, certain estimates are excessive. In order to provide a more realistic reading of the data, we chose to group the beaches into three separate categories, corresponding to the same number of risk indices: erosion between zero and a critical level (up to 100 metres of erosion), beaches most likely to disappear (more than 100 metres of erosion), and coastal expansion (more than zero metres). Both the chart and map refer to the most pessimistic climate scenario, with the greatest seal level rise, in the period up to 2100.