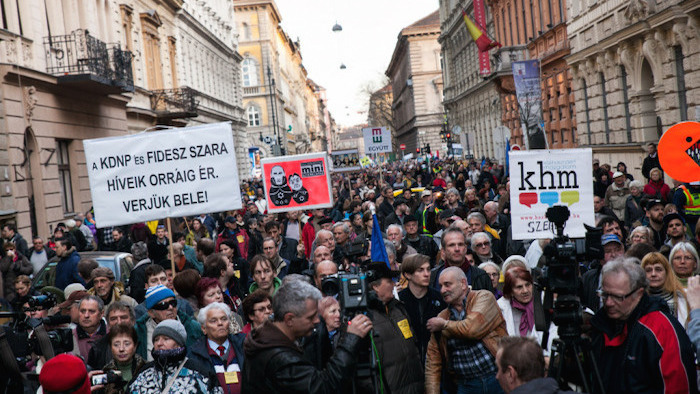 In Budapest, demonstrations against Hungarian Prime Minister Viktor Orbán and his nationalist policies have been growing for more than a year. Magyar Narancs reports that Hungarians took to the streets of the capital on 8 March to protest corruption and express discontent towards a new controversial measure: on 3 March, Parliament voted to extend the period during which the details of a civilian nuclear deal signed with Russia on 17 February will be classified as secret from 15 to 30 years.
Thousands who demonstrated at the call of the opposition carried placards reading “this government is corrupt” and cried “Mocskos Fidesz” (“Fidesz is dirty”) in reference to Orbán’s party, writes the daily.
The deal concerns a €10bn loan granted by Russia to Hungary in order to cover 80 per cent of the construction costs of two new reactors for the country’s only nuclear station at Paks, a project of Russian energy company Rusatom that provides Hungary with about 40 per cent of its electricity.
While the government cites a “matter of national security”, notes the site Hu-lala.org, the opposition believes that —

it is a matter of covering up corruption. While the opposition calls on János Áder, the President of the Republic, to use the Constitutional Court, the demonstrators plan to hit the street once again on 28 March.