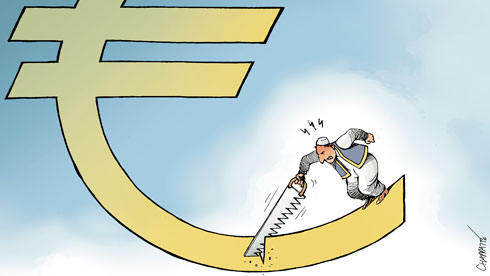 Ever since the Greek financial crisis began, Athens has complied – grudgingly – with the troika’s austerity measures. However, an ever-shrinking parliamentary majority and a primary budget surplus is leading the government to recalculate its willingness to cooperate.

What happens if a bailout country finally decides to just say No?

It is a question that some officials with the so-called “troika” of international lenders have started asking themselves about Greece. The Greek coalition government, following more than a year in office marked by increasing obstinacy towards reform demands, insists repeatedly that it will not countenance any more austerity measures.

In many ways, Greece has lost its ability to shock. Nearly all its debt is held by its official rescuers – European governments, Eurozone institutions and the International Monetary Fund – meaning the broader financial market pays it little attention.

And stand-offs between Athens and bailout monitors have become so commonplace that they have stopped registering on most official radars, even in places like Brussels and Berlin, where policy makers are most attuned to vagaries in Greek performance.