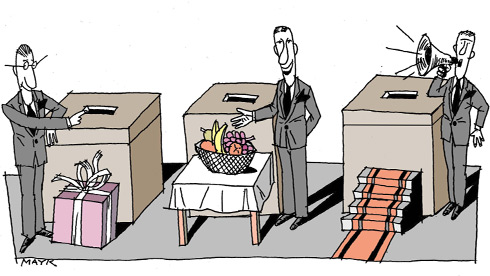 The big winner in the Italian elections, Beppe Grillo, is often described as populist. But in Europe, this political category is somewhat blurred, covering quite a cross-section of movements, argues a Belgian historian.

Beppe Grillo’s landslide victory in the Italian elections is fuel to the fire in discussions on the controversial term “populism”.

Bert Wagendorp previously wrote in this very newspaper that “in contrast to populists like De Wever [in Belgium], Wilders [in the Netherlands] and Berlusconi [in Italy],” Grillo is not the product of an existing political party. In other words: Grillo does not seem to fit as a member of the extended populist family, precisely because he is truly an outsider. However, Wagendorp has overlooked the significance of ideology in the description of populism. According to an ideological description, Grillo is indeed more or less the classic populist: someone who defines the political class as the enemy of the “true” people.

Some populism is fascist

However, Grillo can also not simply be labelled a populist for exactly the same ideological reason. After all, populism is a particularly polymorphous phenomenon, which may be based on highly divergent interpretations of “the people”.

Two extreme positions can be distinguished on the basis of this theory. On the one hand “the people” might be defined as a metaphysical and moral entity, which retains the same characteristics throughout the ages. This “people” has to be defended against foreign enemies and protected from their influences, and might therefore best be personified in the form of a charismatic leader.

At the other end of the spectrum is an approach whereby the people amounts to several million free citizens and their personal desires and projects, which should not be unnecessarily hampered by superfluous regulations and laws. A populism whose roots are firmly embedded in the former, ethnic interpretation of the notion of “people”, might well be defined as fascist. One which is an extension of the latter approach, however, is more likely to be labelled a form of libertarian populism.

Almost all the current populist movements actually comprise aspects of the two variants, albeit in highly varied proportions. As the name suggests, Timo Soini’s True Finns Party leans very much toward the first of these two variants. This political party is indeed based on the idealised image of a Finnish people that needs to be protected from alien influences, such as gay marriage, the Swedish language and North African immigration. The manner in which it mobilises support for these ideals and the concrete measures it proposes, however, are too moderate to actually brand the party as “fascist”.

Geert Wilders in turn opted for a party name – the Party for Freedom – which more sharply reflects the libertarian face of populism. This is also borne out by the party’s positive stance on homosexuality as part of its enlightened heritage. It nevertheless certainly portrays “our Netherlands” as a mystical entity, which requires protection from both “their Brussels” and “the onward march of Islam”. A similar ambiguity has struck the Hungarian Fidesz Party. Although the origin of its name is a Hungarian abbreviation of Young Free Democrats, it nowadays refers solely to the Latin word for loyalty. And the fact that this loyalty relates to “true” Hungarian values is harshly witnessed on a daily basis by minorities such as the country’s Roma population.

Grillo’s Five Star Movement is much closer to the libertarian pole of the previously defined populist spectrum than the aforementioned parties. While his blog and speeches are absolutely bursting with references to an eternal Italy, whose resurrection is finally in sight, he is also clearly allergic to the ultranationalist excesses expressed by characters like Timo Soini and Viktor Orbán. Although he does insist that immigration needs to be more tightly restricted, his stance is neither based on Islamophobia nor fear of the loss of Italian values. His plea for “electronic democracy” is also highly significant in this regard. Instead of marching in file behind leaders or symbols, the Italians should be voicing their views en mass online, he feels.

This sort of classification also immediately begs the question of where Bart De Wever actually stands within the spectrum. He is of course the heir to a tradition, which fostered an ethnic variant of nationalism. And while De Wever has so far resisted any urge to display the lion standard on street signs in his hometown Antwerp, he has expressed the intention to reforge the population into a more or less homogeneous community with sturdy external borders.

The fact that he does not exhibit the same sort of explicit mistrust of Islamophobia like Wilders, De Winter, Le Pen, Orbán or Michaloliakos, however, should not be rejected as simply a minor detail. Furthermore, due to Belgium’s history within the European Community, De Wever has no need to present himself as a populist. He could more readily adopt the role of one appointed to complete the unfinished task of forging a state, than as the people’s spokesperson in condemning a corrupt political class.

“Contrary to what many think, the sick man of Europe is Europe itself, not Italy,” begins an opinion article by two academics in the EUobserver. Despite the usual state of affairs in the southern European nation being one of a “dysfunctional system, ineffective institutions, widespread corruption and generalised limited care for rules” it has still managed to become the world’s eighth largest economy, write Francesco Giumelli, an assistant professor at the Department of International Relations and European Studies at the Metropolitan University in Prague, and Ruth Hanau Santini, an assistant professor of Political Science at the Universita Orientale in Naples, Italy.

Italy indeed is a difficult beast to understand – let alone tame - [...] but it is an anchor, not an iceberg, for the European integration process. Italy will deal with its domestic uncertainties. Europeans should be more concerned about the lack of progress […on a] banking union [...and] an EU austerity package which has failed to be coupled with the necessary social and economic growth measures necessary to jumpstart renewed trust in European institutions. The greatest dangers for the EU come from this, not Italian party politics.