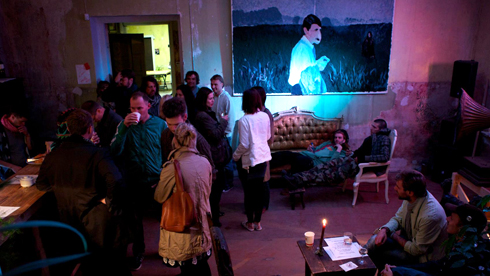 Forget Barcelona, London and Berlin: the Baltic city has become the new destination of choice for hipsters from all over Europe.

The "KKC", the 'ultimate meeting place for creative minds' in Riga

You wonder how they managed to cram so much vintage furniture into such a tiny café. There is hardly more than 15 square metres in the "Bufete", but there are enough 1970s armchairs and sofas to seat 20 people. Depeche Mode is playing on the bar speakers: the synthpop floats over a treasure trove that includes an old gramophone, sculpted busts, 1940s photographs, books, magazines, vases and old clocks.

Two customers have parked their bikes right in the middle of the room. Coffee is served in floral pattern cups, while white SUVs pass by outside. The grey Soviet era building on the other side of the street is typical of an area, which is off the beaten track for tourists – most of whom are happy to stay within the confines of the Old Town of Riga with its churches, art nouveau buildings, and timber frame houses.

Maris and Péteris are drinking an after-work beer in the sun in front of the Bufete. Both of them work as editors for a reality TV show about the Latvian capital. They appear to be hipsters, but are quick to rectify this impression: "We are not real hipsters,” points out Maris who giggles. “This year, all the jokes are about hipsters. Before then, the word didn’t even exist."

In Riga too, the hipsters have Apple computers and slim-fit pants. They ride about on "fixies" wearing big sunglasses, and they are changing the face of the city. In recent months, more and more bars, cafés and clubs have opened up, between the crumbling old buildings, or in some cases inside them. It’s like the Berlin neighbourhood of Prenzlauer Berg just after the Wall came down: there’s plenty of scope for new ideas.

Innovation is everywhere even on top of one of the city’s shopping centres: the "Terrace Riga" opened for business in May 2011, paving the way for a multitude of bars and cafés on the roofs of the city, which offer breathtaking views from almost every table. But best to check first before climbing to the 8th floor of the "Galleria Riga": in winter, the roof is converted into a skating rink.

Just like they do in London, Barcelona and Berlin, everyone is jabbing at their smartphones. The DJs have finally turned on their decks, and someone is setting up a kebab grill. The night can finally begin.

Far from the drunken tourists

The best choice is "KKC", say Katja and Monta. The two girls, who are studying humanities in Riga, speak perfect unaccented English. And they are both experts on the different venues and happenings in the city. The "KKC" – an acronym for "Kanepes Kulturas Centrs" – which opened just a few months ago in an old decrepit timber building, is the latest meeting place for creative minds, serving as bar, club, tea shop and performance space.

Katja and Monta make fun of hipsters, even though they could pass for hipsters themselves. "What’s great about the new fashion is that there are more and more cyclists in Riga. You can even find decent bike paths," says Katja.

"It’s also good,” adds Monta, “to find clubs that are not in the Old Town. We used to be stuck with the drunken tourists, because there weren’t many other places to go. Today we have our own bars in the new neighbourhoods. And there are more venues for culture, for exhibitions, readings and plays."

A last drink at the ‘Chomsky’

An enormous black lion hangs upside down on the wall of the "KKC". Kanepes is the Latvian word for "cannabis", but this is a coincidence, because the bar is not named after the drug, but after Davis Kanepes, the man who opened it.

Davis trained as a filmmaker, studying in Riga, and working in Rome before returning to the country. "The building was just waiting for someone to take it over. It used to be music school. So for 15 years, there were people playing music in all of the rooms, until it was left to fall down. We did all of the renovation work ourselves."

Today, the place is packed with a crowd so deep at the bar that it blocks the way to the stairs to the upper floors. Hundreds of people are drinking, chatting and having fun.

"I came back from London because I had the impression that there was nothing new on a cultural level going on there. Here in Riga, everything is changing,” says Davis. “Six years ago, when I used to ride into university in Riga, there were so few cyclists on the road that they would all say hello to each other. Now people worship their bikes. That’s really great!"

It is 2am, and the "KKC" is still jammed. Monta and Katja are going for a last drink at the "Chomsky", which is named after American left-wing intellectual, Noam Chomsky.

In the afternoon, Maris and Péteris had warned me that the place was "a howling dive." In the dim light, the black ink portrait of Chomsky, stares down from the wall. There is apple-flavoured beer, and the music is on low. A drunken group of young people are sprawled on couches ready to chat and giggle until dawn.