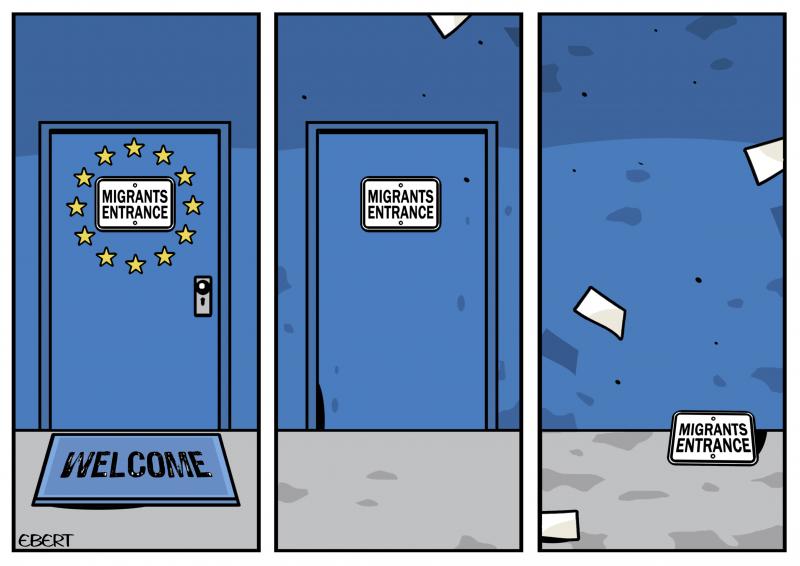 Has Europe turned its back on the duty to care?

Five years ago, the lifeless body of three-year old Aylan Kurdi washed up on a beach in Bodrum, Turkey. At the time, this heart-breaking image sparked a wave of solidarity across Europe. “We can do it” said Angela Merkel, as she welcomed over one million refugees to Germany.

Refugees should be welcomed because it’s the right thing to do, not because of what they contribute. Nevertheless, it should also be said that the arrival of these “new Europeans” has had a positive social and economic impact. Over 60% of the refugees were younger than 26. Germany has a shrinking population and needs migrants, particularly with this demographic profile. So does Europe.

From the German experience we know the key success factors include good coordination across cities and regions, plus support with the acquisition of new skills, including language and access to the labour market. It’s not rocket science.

On 19 August, World Humanitarian Day we should celebrate and renew our commitment to the values that helped make this happen. Instead, we witnessed the death of 45 migrants, including five children, off the coast of Libya in the deadliest shipwreck this year.

Germany currently holds the rotating EU Presidency, but few other member states are prepared to follow its lead.

The key stumbling block to reform has been the distribution of asylum seekers, across all EU member states. Italy, Greece, Spain and Malta cannot be left alone to face the challenge. But so far Poland, Hungary, the Czech Republic and Slovakia for example, refuse to accept their fair share of arrivals.

When Angela Merkel made her courageous decision in 2015, she also broke with the Dublin Regulation that requires asylum seekers to apply in the EU state of arrival. All EU leaders can see that the current arrangements for asylum and immigration are not fit for purpose. But there is no political will to fix it.

Today there is not just a crisis of solidarity, there is also a crisis of leadership. We are witnessing a steady erosion of an open, human rights based approach to asylum and immigration. Those who seek to save lives at sea or provide humanitarian assistance are criminalised. Missions such as Migrant Offshore Aid Station which were actually saving lives at sea have been replaced by Frontex, an EU policing initiative aimed at securing borders. We have seen attempts to criminalise progressive Mayors such as Domenico Lucano in the small town of Riete, Italy and his highly acclaimed integration project for refugees closed down.

Far from creating safe and legal routes for refugees to enter Europe, policy is focussed on deterrence. Italy and Malta have used COVID as an excuse to close ports. Hungary and Poland have taken advantage of COVID-19 to fuel anti-migration rhetoric and further neglect their responsibilities under international law. The EU funds the Libyan coastguard and is therefore facilitating the return of refugees to Libya where many face torture, even death. The state of refugee camps in Greece is a further stain on Europe’s reputation.

Paradoxically, public attitudes towards migration have become more positive  since 2015. However, a study by Dr. James Denizon and Dr. Lenka Dražanová for the OPAM, the Observatory of Public Attitudes to Migration also found that the perceived important of immigration as an issue has risen: "Voters most concerned about immigration—who often already held anti-immigration attitudes—are more likely to vote for anti-immigration parties, even when these parties do not align with other issues they believe in."

In an interview for Deutschland.de, Beate Rudolf, Director of the German Institute for Human Rights said: “I see a threat in authoritarian tendencies that propagate inhuman ideologies and are even able to implement them in government policies.”

She was speaking about threats to human rights and the rule of law in EU member states such as Poland and Hungary but her remarks could equally be applied to many current policies towards refugees and other migrants.

How can the EU reverse these tendencies? When will Europeans be able to live up to the image we have of ourselves as responsible global citizens?  Two recent events may provide the key:

Firstly, the huge explosions that rocked Beirut on 4 August which left more than 200 dead or missing (including at least 34 refugees), injured 6,000 and made 300,000 people homeless must be seen as a wake-up call.  This was an accident waiting to happen, a consequence of deep structural problems in Lebanese politics and society and the demonstrations that followed the explosions testify to that.

Long years of disengagement by the EU and international institutions is part of that story. That is why President Macron’s swift response to the crisis is so significant. Visiting Beirut within two days of the accident, Macron not only pledged financial support but also challenged the Lebanese political class, calling for a transparent committee of inquiry.  That was not seen by most of the Lebanese public as Western interference but rather as a necessary and welcome expression of France and Europe’s responsibilities in the region.

Europe’s commitment to the Mediterranean must run deeper than turning refugees back from our shores. We need a coordinated approach based on development, security and human rights. Turning our backs on the challenges we face in the world leaves a moral and political vacuum, easily exploited by states, such as Turkey, which compete with the EU for influence in the region.

Secondly, the COVID pandemic is having a transformative effect on how we see the world and other people. We are rediscovering the importance of empathy. We admire sacrifices made by migrant workers at all social levels to protect our health.

And yet a change in the attitudes of the public is not leading to a change of approach by law-makers. If anything, policy is becoming more restrictive. Without safe and legal routes, human traffickers and people smugglers continue to prey on vulnerable refugees and migrants and put their lives at risk.

When public opinion turns against migrants, governments adopt more restrictive legislation but when attitudes change back, policy remains the same.

Meanwhile cramped conditions and a lack of basic hygiene in the refugee camps in Greece, heighten the risk to refugees, volunteers and staff who work there and to the local population. This August has seen the first reported COVID outbreak, leading to calls for immediate evacuation of all the island camps.

Commenting further in her interview with Deutschland.de, Beate Rudolf said: “The second threat to human rights is when people take them for granted. The state will only respect human rights, when people demand them.”

There is a ratchet effect when it comes to public opinion and immigration policy. When public opinion turns against migrants, governments adopt more restrictive legislation but when attitudes change back, policy remains the same.

Civil society has a key role to play in shifting the political narrative.  Many of those who are saving lives in Europe were themselves refugees or other migrants and we should say so. They are part of the solution to the challenges Europe faces, not part of the problem.

This World Humanitarian Day, we Europeans, find ourselves in the midst of a humanitarian crisis of our own. Recognising the value and inter-connectedness of each human life can make our societies more resilient. It's high time we learned to do so.