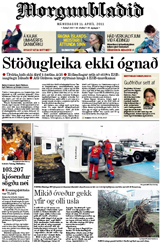 On 9 April, 60% of Icelandic voters once again rejected an agreement signed by their government with the Netherlands and the UK for the reimbursement of 3.9 billion euros lost by investors in both countries following the collapse of the online savings scheme Icesave. In March 2010, 93% of the Icelandic electorate had rejected a previous agreement.

The result of the referendum "will not threaten stability" in the country, points out dailyMorgunbladid, which quotes a representative of the IMF in Reykjavik who says that "Icesave was not associated with the IMF programme" to bailout the country. At the height of the financial crisis in 2008, the International Monetary fund granted Iceland a loan of two billion dollars, the final installment of which will be paid out during the summer.

Both of the “no” votes follow on from the January 2009 announcement of the immediate resignation of the Icelandic government in the wake of mass protests by citizens who had lost their savings and their jobs. Commenting on the 9 April result inEl País, Icelandic writer Guderburg Bergsson remarks: "Until now, Iceland was largely unknown to the general public in other countries, but as word of a ‘street’ rebellion that toppled the government continues to spread, it could become an example for larger corrupt countries.” He continues, "Money has taken over from ideology. The people in the streets lost the money with which they were hoping to buy a small part of the American dream, and that is why they rebelled violently."

"There has been no catastrophe in Iceland, but events have put a stop to the national megalomania, which resulted from isolation," concludes the writer, who believes that "the crisis has brought the country to its senses. Countries always have to be forced to come to their senses."

You can unsubscribe at anytime *
Categories
EconomyIceland