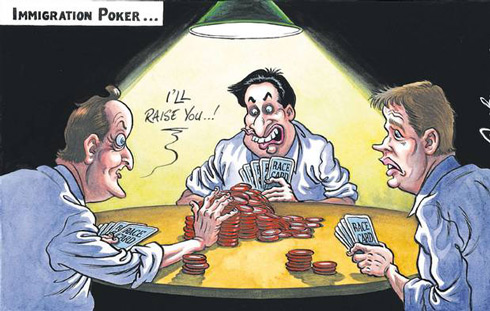 Convinced like his Labour opponent Ed Milliband (image centre) and his Liberal Democrat coalition partner Nick Clegg (on the right) that a hard line on immigration will be the key to winning the next election campaign, on March 25 Prime Minister David Cameron (on the left) announced that he will impose welfare restrictions on immigrants, including those from other EU countries.
Unemployment benefits for EU nationals will be suspended after six months if they are unable to prove that they are seeking work. At the same time, free public healthcare will no longer be available to those who do not pay taxes in the UK. Finally, people who have not lived for a minimum of two years in the UK will be denied access to public housing, as will those who are unable to show that they are “giving something back”.