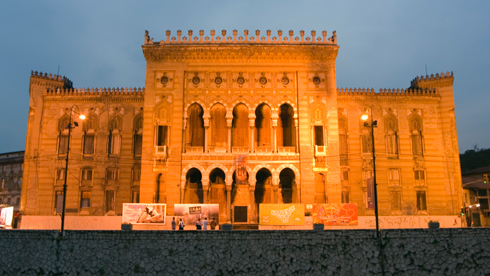 Impossible to turn the page

The national library in Sarajevo was a symbol of the multi-ethnic state of Bosnia to the end, destroyed along with the state itself during the war in Yugoslavia. It could be rebuilt with the help of EU funds, but years after the war, there is no sign it will reappear anytime soon.

The National and University Library of Bosnia and Herzegovina in Sarajevo.

If Kanita Focak had to pick the most important book of her life, it would be a tough choice. Is it the Decameron, the short story collection of Giovanni Boccaccio from the 14th Century? A novel by Salman Rushdie? Or the Bridge over the Drina by Nobel-winning Yugoslav author Ivo Andrić? When it comes to the most important place of her life, though, Focak has no hesitation in naming it: the Vijećnica, the former National Library of Bosnia and Herzegovina and the symbol of its capital, Sarajevo. The library’s books and manuscripts, maps, and newspapers from six centuries, in Latin and English, Turkish and Arabic, Russian and Persian, German and Italian – and a colourful range of concerts and exhibitions – made it a reflection of the multi-ethnic state of Bosnia.

Today, Focak is 59 years old. “The outstanding experiences of my life,” she says, “are all bound up with the Vijećnica.” Very early in life, Focak came to love languages, literature, painting and architecture. At sixteen, resembling a black-haired Grace Kelly, she devoured books on the architecture of the Renaissance and the works of Boccaccio and Dante in the library’s wood-paneled reading room. Focak, a Catholic, was in the library when she met Goldschmied Faruk, a Muslim ten years her senior who became her lover. When it rained, they met in the reading room; when the sun shone, they met in the resplendent marble entranceway. Both their families were against this relationship, but the lovers held on and married at the end of the 1980s. They moved into the Faruk family house, right across from the library.

Their luck soon ran out. The war in Croatia began in 1991 and reached Bosnia less than a year later. One afternoon in early April 1992, Serb artillerymen began lobbing their first shells into Sarajevo from the luminous green hills above the city. The Bosnian parliament and the constitutional court were soon on fire.

One of the spiritual arsonists had been sitting for many years next to Focak in the reading room of the Vijećnica: Nikola Koljević, a Shakespeare scholar at the University of Sarajevo. The professor was immersed in the ideology of the nationalist Serbs: he believed the Serbs were called upon to build a greater Serbia and to drive out the Muslims and Croats, destroying their heritage. During the war, Koljević, a deputy of Serb leader Radovan Karadžić, helped direct the expulsions and the campaign of destruction.

On the evening of August 25, 1992, the former Shakespearian gave orders to burn the Vijećnica to the ground. The Serbs fired a hail of incendiary shells onto the library. Nine-tenths of the roughly 1.5 million books burned. It was and has remained the largest book burning of modern history, a planned act of vandalism, the destruction of a common past to prevent a common future.

Across the river, a piece of shrapnel punched through Focak’s living-room wall and struck Faruk in the stomach. He struggled with death for four days. “You’ll see our son grow up” he told Focak, and then died in her arms. They had been married for four years.

After the war, Focak, now an architect, worked to rebuild Sarajevo. She helped to restore mosques, churches, and houses, ensuring Sarajevo was once again one of the most beautiful cities of the Balkans.

But the burned-out national library has remained merely a facade. To date, no one has been held to account for the attack on the library, despite the destruction of cultural heritage being a war crime that can be brought to the Tribunal for the Former Yugoslavia in the Hague. Koljević committed suicide. In the Hague, prosecutors in the trials of Karadžić and his general, Ratko Mladić, have struck the destruction of Vijećnica off the list of accusations, which have grown too voluminous.

Librarians also are still waiting for justice. With their rescued books and manuscripts, shuffled from the vault of a lottery firm in a fallout shelter to the cellar of the Ministry of Education and currently held in a former barracks of the Yugoslav army, they are rebuilding the holdings of the national library. But today, the library remains housed in its “emergency accommodation” and faces bankruptcy. More than 100 people worked in the old library; today, 47 employees continue working in the temporary housing.

The librarians have covered whole walls with copies of letters they have been sending to Bosnia’s politicians for years, begging them to rebuild their library and, above all, to finance it. So far, all their pleas have been in vain. It seems the unholy spirit of Koljević, the Shakespeare scholar turned arsonist, lives on in the Serb-dominated Republic of Srpska. On paper, the Serb Republic is one of the two broadly autonomous parts of Bosnia-Herzegovina, though its president would prefer to make it independent or join up directly with Serbia. The Serbs in Banja Luka, the capital of the Republic of Srpska, long ago renamed a provincial library their own National and University Library.

In the second part of the state, the Federation of Bosnia and Herzegovina formed by Muslim Bosnians and Croats, some Croats would prefer to see Bosnia carved up further – and no one wants any born-again national symbols, even though the Treaty of Dayton that ended the war in 1995 holds that Bosnia and Herzegovina must finance the state institutions. For eleven years, Sredoje Nović, a former intelligence chief and interior minister of the Republic of Srpska, has been responsible for culture as civil affairs minister. As he sees it, his ministry did not found the Vijećnica, and so should not have to pay for it, either.

A lot of money is available in Sarajevo for the state institutions, if the political will exists and political neutrality is secured. Even the Vijećnica’s facade was magnificently restored some time ago, with the European Union footing the €5m bill. The former landmark is slated to be reopened in June 2014 as the seat of the mayor and city council.

But neither institution has much power at all in today’s Bosnia, and neither represents the whole country. This fits with the policy of the minister, who refuses to finance the national library or to include the librarians in planning the site. The project that does exist would have the rebuilt Vijećnica hold only manuscripts and rare books. The rest of the books will remain in the temporary shelter.

That is how history is made. “The main square of our common culture, common memories, common life, burned down with the old Vijećnica,” says Focak. What remains of the books that were her life will stay on the outskirts of the city, in an old Yugoslav army barracks.