Report Elections in Bulgaria
Election posters showing Siderov, the leader of the far-right Ataka party in Sofia, Bulgaria, on May 7 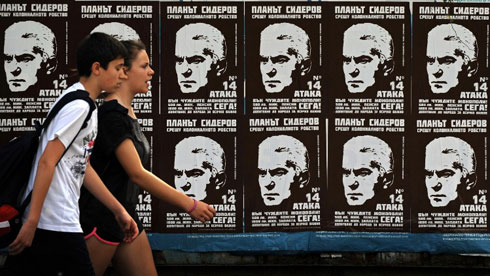 In search of Europe

In the campaign for the legislative elections coming up on May 12, Europe is the big absentee. Unless it’s about calling for an exit from the EU – as the extreme right is – or promising that European funds will continue to pour into the coffers of the country, as the two major parties are doing.

Election posters showing Siderov, the leader of the far-right Ataka party in Sofia, Bulgaria, on May 7

For the first time since Bulgaria entered the European Union (EU) in 2007, Europe is not being debated in the public arena. Any tune eventually gets tiresome, but the reason here seems more profound: Europe has joined the long list of illusions lost during the transition that followed the fall of Communism in 1989.

No party appears before its voters waving the European idea these days. Even the political formations that tagged themselves "European" have forgotten it. Europe has been reduced to a kind of jacket pin that Bulgarian politicians keep under their lapels to flash to foreigners. When they feel the need, they hasten to Brussels to convince themselves that they still exist, despite the evidence to the contrary that they find at home. Naturally, while there they meet only representatives of their affilated parties, which loudly declare their support, especially in the run-up to elections.

The most striking example of the decline of the European dream is offered by just that party that has been ruling the country and that is about to complete a second term, the GERB (Citizens for European Development of Bulgaria). At the party’s grandiose show staged on April 7 in Sofia, its activists handed out a glossy brochure entitled “The right direction for Bulgaria: some points of the political agenda of GERB.”

The first lines remind readers that it is a “centre-right party, and member of the family of the European Popular Party (EPP)". To prove it, prominent members of the "family" were invited and installed at the forefront of the event, including the Secretary General of the EPP, Antonio López (Spain) and the president of the parliamentary group of the EPP in Strasbourg, Joseph Daul (France).

The lattter probably had no inkling that their presence was intended to legitimise the commodification of the European idea conveyed by the Bulgarian right. If they could have read Bulgarian, they would have seen that the European issue is addressed solely in terms of "European funds". To clear up any doubts about the fact that Europe has been reduced to a bag of money, former Prime Minister Boyko Borisov spoke frankly to his guests from the EPP. "Thanks to our distinguished guests, we guarantee that in the next few years some 32 billion leva (€16m) will be injected in the Bulgarian economy. When we talk of GERB, we must always bear in mind that we are a party that brought money into Bulgaria.”

A little reminder: before coming to power in 2009, the GERB had much grander European ambitions. To get Bulgaria into the Schengen area, and to save the country from the humiliating "mechanism for cooperation and verification" (MCV) that the country has been subject tosince its accession. In short, to make the Bulgaria a full member of the European family. But the opposite happened: Sofia has lost all hopes (and interest) in adopting the euro and joining the Schengen zone, at the cost of keeping in place indefinitely the MCV that reminds us that our country does not deserve to sit at the European table.

Any one-upmanship or jostling between the parties on the subject of Europe has also likewise vanished: no one party expects it can win the election by being "more European" than the others.

The proof is furnished by the main opposition party, the Bulgarian Socialist Party (BSP). The most amazing thing is that in his new job as president of the Socialist Europeans (PSE), the leader of the BSP, Serguei Stanichev, speaks a lot less about Europe before his Bulgarian voters than he used to. In his party’s programme for the May 12 elections there is only one tiny paragraph devoted to "Bulgaria in the EU and NATO": and that declares only the refusal to accept the idea of a "two-speed" Europe. For this, the programme continues, the economic gaps between the rich and poor regions of the union must be reduced.

If the European idea has shrunk to this in the programme of the major parties, what about the small parties? For them, Europe has become microscopic, if not non-existent. The political party of former European Commissioner Meglena Kouneva, "Bulgaria for Citizens", promises us "31 things that will change our lives". The term "European" does not show up until item no. 28: to promote a programme to rehabilitate the old subsidised housing in the country, by the grace of – the reader willl understand this – European funds.

To be fair, it must be admitted that the subject of Europe appears clearly in the forefront of the proposals of the leader of the nationalist and xenophobic party Ataka, Volen Siderov. That party is approaching the May 12 election with a plan called “A New Path for Bulgaria,” which is far from being new but has only made it onto the party’s election platform now.

A whole chapter is devoted to the question of keeping Bulgaria in the EU. The answer is there in the first sentence: “The bloc in its present form is a threat to democracy and the national sovereignty of member states.” After listing all the vices of the EU, Volen Siderov proposes a "general reorientation of the Bulgarian economy towards China, India, Brazil, Japan and Russia.”

And so, in the absence of anything else, the parties are offering us a virtual ramble across the world map, while expecting that the voters will hand them a ticket to get into Parliament – which remains the main tourist agency for Bulgarian politicians.