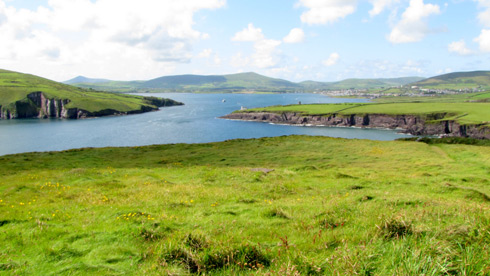 Ireland back in the green

After two years of radical austerity the Irish economy is going through an upswing, thanks to new revenue the state is collecting from renewable energy and from taxing fossil fuels and rubbish.

via FlickrCC  | The Dingle Peninsula in County Kerry, Ireland

Ireland is doing everything it can to leave the lean years behind. The boost to the finances and the morale of the proud Irish is not solely the doing of the International Monetary Fund (IMF), which pumped $1.17bn of rescue funds into the coffers of the country a few weeks ago: the Irish government and the Irish people have also played their part by opting for a totally innovative growth strategy based on renewable energy.

According to the The Economist the country is now the greenest in Europe - after being in the red four years ago - and should be able to bring its deficit to below 2 per cent of GDP thanks to a spurt in growth that looks set to hit the “miracle” figure of 2 per cent.

To spur the economy and save energy, the government has opted to tax the use of fossil fuels in homes, offices, cars and factories. The more carbon dioxide the Irish emit, the higher their bills - all the more encouragement to those who don't bother to sort their rubbish and rein in their waste (the rubbish is systematically checked and weighed at kerbside, and charges calculated every quarter).

It's a strategy that automatically translates into an increase of 5 to 10 per cent in the cost of oil, natural gas and kerosene. That forces the Irish to choose: either continue to pollute and throw away their money in taxes, or go green. The Irish have gone for the second option. Not only is the country now emerging from the crisis, but it is showing a record rate of clean energy use. Carbon dioxide emission levels have fallen 15 per cent since 2008, including a 6.7 per cent drop in 2011 alone, the year that saw the first signs of recovery in Ireland's economy.

Only a few years back the country was one of the worst performers in the EU when it came to per capita greenhouse gas emissions, which were at the levels of other countries where environmental concerns seemed absent, such as in the United States. “We're not saints, like those Scandinavians”, Eamon Ryan, Minister of Energy from 2007 to 2011, told the New York Times. “We were lapping up fossil fuels and buying bigger cars and homes - very American. But slowly, progressively, we're taking a fresh look at our lifestyle.”

The political parties of the "Emerald Isle" have not flinched at the carbon tax, which let the Irish government reap nearly a billion euros in three years, including €400m in a single year, 2012. And the Irish people have responded by investing in renewable energy and getting involved in recycling waste.

Today, new car purchases include a tax on the vehicle's emissions. To deal with these steps, Renault-Nissan signed an agreement with Dublin and BSE (Ireland's main electricity provider) a few weeks back to speed up bringing electric cars onto Ireland's roads.

If the environmental shift has been favourably received, it is thanks in part to an effective awareness campaign - “Tackle litter before it tackles you” - notably an amusing TV spot featuring a waste bin taking a run at litterbugs, even little old ladies, and knocking them flat.

According to data published last year at the European summit on Waste Electrical and Electronic Equipment (WEEE), Ireland ranks first in the eurozone when it comes to waste collection, at 9 kg per capita, followed by Germany at 8.2 kilos and the UK at 7.5 kilos. Italy, at 4.7 kilograms per capita, narrowly crawls over the lower threshold of 4 kg set by Brussels.

Ireland's economic stimulus plan for 2013 provides for new taxes and new shavings off the budget. It's a strategy that's good for the environment, say experts, but that hits the poorest social classes the hardest. That is why the government has also opted to tax tobacco, which is considered by some to be a luxury for the wealthy. One thing is certain: Ireland will not climb out of its rut without upsetting some people and without making sacrifices. The Irish government has judged that it would be good, for once, if these sacrifices were not made at the expense of the planet.

Ireland’s newfound environmental reputation is coming under threat following the announcement of the discovery of huge oil reserves in the Irish Sea. With the Barryroe oil field off the coast of Cork estimated to hold around 1.6bn barrels alone, it could provide thousands of jobs and tax revenues, transforming the west coast towns of Cork or Galway into “mini-green versions of Dallas in an oil rush,” says Irish Independent feature writer Kim Bielenberg. She adds –

Until recently, critics of Irish oil exploration complained that it produced a lot of guff but very little gush. But now healthy scepticism about the industry is giving way to optimism that an energy boom can play a role in our economic revival.

Some critics complain that the government’s 25 per cent tax on oil finds is too low and is losing much-needed revenue, while others fear environmental damage to the region. She continues –

With the potential for increased tax revenues, reduced reliance on fuel imports, and new jobs, the benefits of a new energy industry may prove too tempting to resist.