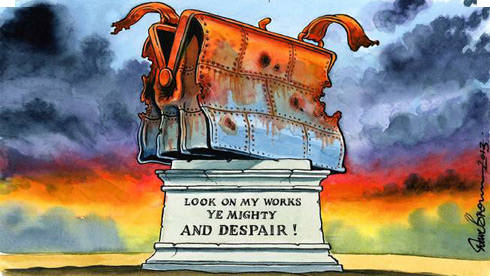 From crushing Britain’s trades unions to defeating the Argentine military in the Falkland Islands, Margaret Thatcher’s 11-year reign triggered seismic changes in the economic and political landscape of the country. Her long-lasting legacy will continue to be debated.

More than two decades have passed since a tearful Margaret Thatcher left 10 Downing Street for the last time as prime minister. There were those who mourned and those who rejoiced, but the significance of that moment escaped no one. The curtain had come down on a premiership that had both defined and transformed this country – for better and for worse. Her twilight years on the fringe of British politics did nothing to change that.

The 1970s seem an age away; not only Britain, but the world, has changed. But the passions she aroused from the day she took office are as live now as they were then. Divisions that are still felt in the Britain of today was when she left office. It was a rare epitaph that was not prefaced with the sentiment “like or loathe her”.

Perhaps she understood how divisive a figure she was to become, when she famously quoted the prayer of St Francis after her first election victory, asking that “where there is discord, may we bring harmony”. But the fierce conviction with which she approached her leadership first of the Conservative Party and then of the country – and which so contrasted with the muddle and depressed mood of both – was at once her signal strength and, in the fullness of time, her fatal weakness.

Without the single-mindedness she showed – whether for sound monetary policy or popular capitalism (marketing shares in utilities to first-time investors), or selling off council houses, or, after 1988, combating climate change – she would not have been able to achieve what she did. But there were times when her refusal to compromise at all made her political life harder than it might have been and eventually proved her undoing.

You can unsubscribe anytime *
Categories
Member StatesPolitics and democracySocietyUnited Kingdom