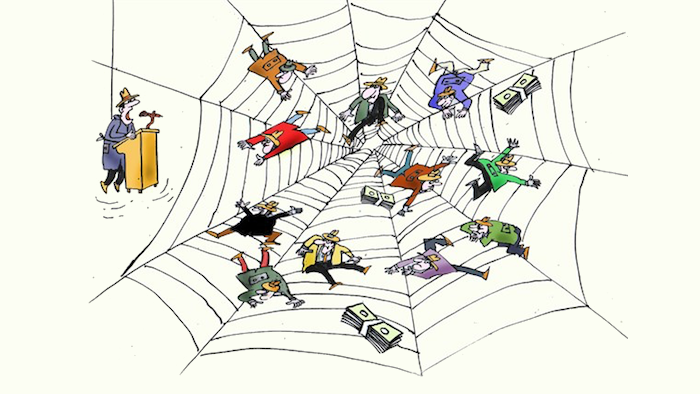 Is public integrity losing its appeal?

According to the latest Index of public integrity, while key indicators tend to stagnate, freedom of the press and of trade is losing ground in most of EU countries.

Freedom of the press and of trade, two key elements in the control of corruption, are regressing in most of EU countries, according to the latest Index of public integrity (IPI) report. Released on 9 December, the international anti-corruption day, by the European research centre for anti-corruption and state-building (ERCAS), the IPI uses publicly available big data in six key fields which ERCAS researchers Victoria Dykes and Ramin Dadasov identified to measure corruption: judicial independence, administrative burden, trade openness, budget transparency, e-citizenship, and freedom of the press. They are determinants, as well as deterrents, of a society’s capacity to control corruption.

The criteria has been selected based on a theoretical framework by Alina Mungiu-Pippidi, a professor at the Hertie School of Governance and a team leader at ERCAS. Researchers also use a broader definition of corruption, which also includes the attribution of public contracts or funds to political friends, among other criteria. The index ranges from 1 (worst) to 10 (best), and so do all its components. Cyprus is the only EU country excluded from the IPI survey, as it is not part of the Open Budget Index, a key element of the budget transparency component within the IPI.

The maps below show European countries ranked by overall Index on public integrity (IPI) and individual IPI components score, as well as the IPI and its component’s variations between 2015 and 2017.

According to professor Mungiu-Pippidi, 2017 “was a mixed year for anticorruption: On one hand France moved decisively out of the hypocrisy so often associated with developed countries of late by tackling conflict of interest for its politicians. Demand for good governance has increased in many countries around the world, but we have also seen authorities and the public turning a blind eye in countries where corrupt behavior was disclosed. There were no crowds in the street to protest the systematic tax evasion of elites in developed countries following Paradise Papers: no public outcry in reaction to the diesel cartel revelations in Germany.”

The biggest positive changes were recorded in reducing administrative burden (red tape) and building e-citizenship (which computes access to Internet and number of Facebook accounts nationally and explains by itself most of the demand for good governance in any given country). Judicial independence and fiscal transparency have not significantly changed, while Europe regressed a little on freedom of the press and trade red tape, two essential components. Fiscal transparency and reduction of red tape (time needed to register and pay taxes for a business) have registered some progress in this interval (for instance in Macedonia), but it has been insufficient to compensate press freedom losses, which concern most of European countries, and notably France.

As for judicial independence, progress in some cases is offset by decline in others, and antic orruption often weakens the judiciary further, instead of strengthening it, due to furious battles for its control that ensue anticorruption campaigns (cases range from Italy after mani pulite to the Ukraine or recently in Romania). The evolution of the judicial independence component of the index, for instance, shows that countries which seem to be champions in change (like Romania) still struggle to rise above a five on the scale.

“The consequences of stagnation on control of corruption cannot be greater”, says Mungiu-Pippidi, adding that “the failure of governments to create merit-based systems in their societies subverts innovation, the most sustainable source of economic growth, and state capacity, which leads to political instability and distrust in government. Societies with the greatest corruption scores fall victim to en masse desertion.”

Focusing on objective elements rather than the perception of corruption

The common corruption indices tell us mainly about how citizens and experts perceive the state of corruption in their society. They do not tell us anything about the causes of corruption nor about how the situation could be improved. Evidence from comparisons across countries shows that establishing effective control of corruption requires much more than the mere adoption of specific tools and strict legal regulations. It relies on a balance between a state calibrated to reduce the possibility of the abuse of influence and a society’s capacity to hold its government accountable. The IPI highlights the most important dimensions of that mechanism. It correlates with the World Bank’s and Transparency International’s measures of control of corruption, but in contrast to them it is more objective and transparent. The six components of the IPI were selected based on years of theoretical and empirical research on the control of corruption. The components adumbrate the idea that corruption reflects a national-level equilibrium between resources and constraints. Based on previous research, components were selected which reflect that theoretical framework and which are significantly associated with most common measurements of control of corruption.