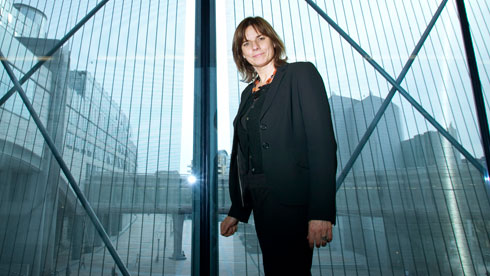 Isabella Lövin – The MEP who never gives up

Since her election to the European Parliament in 2009, the Swedish MEP Isabella Lövin has pursued just one goal: to stop overfishing. Even if she has to upset the routines of elected officials and throw certain local communities out of work.

For 50 years, the professional fishermen on the largest inland lake in Northern Ireland have carefully nurtured their fish stocks. They set up a cooperative, introduced quotas, and released fry, while the French and Spaniards went on vacuuming the fish out of the oceans. And today a Swede wants to stand in the way of an entire industry and the community that relies on it for their livelihood to get the backing of the European Parliament for a ban on eel-fishing across the whole of the union.

Three hundred jobs will be lost. And the fishermen of Lough Neagh will find no new ones.

A fisherman from the lake, Pat Close, showed up for the meeting with Isabella Lövin with scientific reports under his arm and flanked by an expert. Just a little respite? Perhaps they could release more fry in compensation? Nothing helped. Isabella Lövin won’t budge an inch. “They all try to get relief and subsidies. But they’ll have to look for another livelihood; it’s as simple as that.”

It’s a strange politician who works here. Where other members have pinned up pictures of their country of origin, the walls of the office of Isabella Lövin are lined with maps showing fishing zones in the Skagerrak [the strait that separates Norway from Denmark] and photographs of tuna.

It’s been four years since she set up shop here, and not as a representative of the Swedish people, despite what her business card says. The constituency she works for are Anguilla, Gadus morhua, Salmo salar. Eel, cod and salmon. Nobody on her staff pretends that she cares about anything else. The tax on Cypriot bank deposits? She votes with her parliamentary group. The banking union? Ditto. Other subjects? She has no time for them.

A largely unknown journalist in 2007, she published a book called The Silent sea [Tyst Hav, ed. Ordfront]. Against all expectations, this tale of the overexploitation of fisheries made a huge splash and won her three Swedish awards: the Grand Prize of Journalism, the Golden Spade [which rewards investigative journalists] and the Environmental Journalism Prize. Then, in autumn 2008, she was made an offer that at first she thought she would refuse. The offer was a uncertain second place on the list of the Greens [for the 2009 European Union elections in Sweden], in exchange for giving up some of her credibility as a journalist. Isabella Lövin let herself be persuaded, and the Greens won a new seat. Following that win, the party underwent a whirlwind metamorphosis probably unprecedented in the history of Swedish politics.

Hostile to the EU the year before the elections, the Greens now had an MEP who, upon taking office, rushed to engage in what may be the most aggressive supranational policy to be found in Brussels. And following the last elections to the parliament, the question of an exit from the EU seems more or less buried.

It is something of an experiment in democracy. The Green voters simply sent to the European Parliament a novice in politics with one very blunt instruction: stop overfishing.

Can it pay off?

The answer will come in June, after the new European fisheries reform enters into force. And to understand the whys and wherefores, we have to forget what we learnt at school, that parliament is supposedly powerless. The fact is that since the Treaty of Lisbon it has a power of co-decision on most subjects and even the right to toss bills into the rubbish bin.

Parliament has already voted once, and MEPs have rallied overwhelmingly to the positions of Isabella Lövin: 502 votes for, 137 against. Until the Council – made up of the Fisheries Ministers of the member states – does not decide otherwise, that is. Ireland, which currently holds the presidency of the union, has already tabled its own compromise.

Isabella Lövin must now try to make sure her uneasy alliance of socialists from the south and conservatives from the north holds together, at a time when the fishermen of almost all of the member states – those that possess a coastline – oppose reforms and are claiming exemptions.

Isabella Lövin talks of “the fishing lobby”. Others perhaps would use the term “collective” to refer to these thousands of people whose employment is now under threat. Regardless of the name given, there is a real conflict here. The members of the ecologist group in parliament are themselves not all on the same page. In the hallway outside Isabella Lövin’s office, a Basque member of the Green group says that he will vote as the fishing industry of his region tells him to.

Isabella Lövin is using her new powers to the full. In a single term, she has emerged as one of the three voices that matter when it comes to fisheries policy. The German Ulrike Rodust, the Commissioner Maria Damanaki are seen as the other two mandarins of that policy. Isabella Lövin skips meetings of her parliamentary group in Sweden. Instead of crisscrossing the country shaking hands in the rural districts, she heads off for debates and conferences across Europe and around the world, in Madrid, Hamburg, Lisbon, Nairobi, Dakar.

It’s an experiment in democracy that may bring her followers. But it’s also risky to be a one-issue politician. Few other politicians are as easy to judge and criticise as Isabella Lövin. And has she pulled it off, or has she not? Will there be more or less fish in the sea tomorrow?

The future of fisheries resources and how Isabella Lövin’s experiment will be written about in the history books hang on the final decision, which will come before summer.