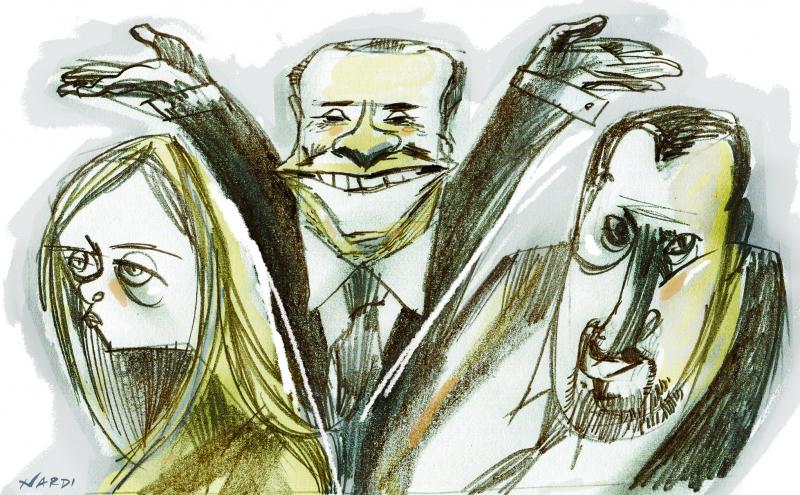 After a far-right election victory will Italy follow the Polish or Hungarian path?

The sovereignist right, led by Giorgia Meloni in coalition with Salvini's Lega and Berlusconi's Forza Italia has won the 25 September general election in Italy. What happens next? A Polish or Hungarian style of politics, speculates the Italian culture and politics magazine il Mulino.

The Italian sovereignist right has won the 25 September elections and will form a new government. The majority party within the coalition is Giorgia Meloni's Fratelli d'Italia (FdI), which, like the Polish right, pursues a pro-NATO but Eurosceptic foreign policy. FdI’s allies in government are Lega, whose leadership tends to sympathise with Viktor Orbán and Marine Le Pen (even if a substantial bloc within the party holds more moderate positions) and Silvio Berlusconi’s Forza Italia, which despite being in the European People's Party and proclaiming itself in favour of Europe and NATO, has not always been convincingly pro-European and at times has even shown pro-Putin sympathies.

Given the balance of power within the coalition, with FdI having more votes than Lega and FI combined, the Polish approach will probably end up prevailing, at least initially.

What do we mean by the Polish approach? The Polish sovereignist right, since it returned to government halfway through the last decade, has put the brakes on European integration, except where it has directly benefited economically.

The Polish government has also upheld the primacy of national legislation over EU legislation. On this basis, it has introduced a series of measures since 2015 calling into question the rule of law and the independence of the judiciary. In doing so, it violated the EU Treaties and was sanctioned by blocking a series of European transfers, including Next Generation EU (NGEU) funds.

Lengthy negotiations ensued, resulting in a change to the country's existing legislation on the independence of the judiciary, which was deemed sufficient to obtain the unfreezing of NGEU funds in June this year.

Internationally, Poland has historically been pro-NATO and anti-Russia, a tendency that was only reinforced by Russia’s invasion of Ukraine. In the case of Italy, a “Polish approach” would mean a Eurosceptic political strategy that probes on several fronts the country’s margins of manoeuvre within the European Union (immigration, the National Recovery and Resilience Plan, competition, perhaps even rule of law), and opportunistically supporting only those European policies that directly benefit the country.

When it comes to political-military alliances, the Polish approach should ensure that Italy remains anchored to NATO (with perhaps a few quibbles, especially on the part of Lega) and continues to favour a privileged relationship with the United States (especially with the Republican Party).

At this point it is not easy to predict the extent to which the new Italian government will follow the sovereignist and ethno-nationalist instincts already evident among the parties forming the new coalition.

As mentioned, the most likely course followed by the new right-wing government will be the Polish approach. After all, FdI and Poland's PiS are in the same European parliamentary group. An Orbanist drift is not impossible domestically, but only if things go badly for the right-wing government: faced with sufficiently intense economic and social discontent, they may be tempted by the option of illiberal democracy.

Internationally, the pro-Putinist component in the government is a minority and will remain so at least initially. However, It could re-emerge if Donald Trump is re-elected in 2024. Being pro-US and pro-Russia would no longer be a contradiction, and the Orbanist wings of Lega and (to a lesser extent) Forza Italia could regain strength.

The alternative? A centrist turn, with the major forces of the Italian sovereignist right moving in a pro-European direction in order to take full advantage of the National Recovery and Resilience Plan (NRRP) and play a meaningful role in European leadership. However, this option is unlikely, given both FdI and Lega strategy, and would disappoint the electorate.

If it does pursue the Polish approach, the new Italian government will have to recognise and avoid the red lines that would lead to a decisive break with the EU (and the Franco-German axis), approaching without crossing them

If it does pursue the Polish approach, the new Italian government will have to recognise and avoid the red lines that would lead to a decisive break with the EU (and the Franco-German axis), approaching without crossing them. There will be attempts to renegotiate the NRRP and then the government will probably settle for some marginal changes.

If red lines are crossed, and Polish and Hungarian solidarity protects Italy from sanctions, it will not protect the country from economic consequences. This is because European institutions can still refuse to disburse NGEU funds when member states fail to meet their commitments. Moreover, as a member of the eurozone, Italy is bound by a series of commitments, the violation of which can influence monetary policy and provoke a severe reaction from financial markets.

If the sovereignist right government successfully dodges the red lines and finds a conflictual but sufficiently stable modus vivendi with the European institutions, it may well be seen as squaring the circle: securing most of the EU benefits that Italy enjoys and, at the same time, fulfilling a range of sovereignist commitments made to its electorate.

What might seem like a positive result in the short term could turn out to be extremely damaging in the medium and long term.

More : A very Italian salsa of populism and conspiracy theories

During the Lega-M5S government between 2018 and 2019, it was reasonable to assume that interactions between Italy and the EU would not significantly influence the EU's modus operandi. In 2022, such assumptions are no longer valid for two reasons:

1) Post-pandemic, the EU’s general economic policy approach has changed. From putting one's own house in order, there has been a shift towards European solidarity and the spirit of NGEU, which has brought important benefits to the countries most impacted by Covid-19;

In short, the Polish approach that is likely to be adopted by the new Italian government runs a significant risk of going back to the future, where policies pursued during the sovereign debt crisis – policies that are, moreover, perfectly compatible with the European treaties – come back into vogue.

It was not easy to bring Germany round to European solidarity in defining the response to the pandemic, and the armed peace with the so-called "Frugal Four" [Austria, Denmark, the Netherlands and Sweden, ed.] is conditional on Italy (as well as the other countries benefiting most from NGEU funds) keeping its commitments, i.e. spending the funds wisely and carrying out important reforms to strengthen the resilience of its economy.

Mario Draghi could offer such guarantees when he helmed the Italian government in February 2021. Now, in the midst of the NRRP’s implementation, a new Eurosceptic government arrives which aims to renegotiate important parts of that plan, and contrives “reforms” that are incompatible with European legislation and/or would unhinge the macroeconomic balances of the country and perhaps even the Eurozone.

Why should the European institutions and member states reward such behaviour? If Italy wants to follow Poland down the sovereignist path, it cannot expect selective access to European solidarity. There is therefore a real possibility that the spirit of NGEU will disappear with the pandemic, and large-scale European solidarity will remain an isolated case, despite yielding economic results far superior to those of the austerity policies adopted between 2012 and 2014, which are in danger of becoming the standard EU policies once again, despite their poor outcomes.

If this turns out to be the case, it is not the Frugal Four who will be responsible, but rather those who chose to kill the goose that laid the golden eggs.