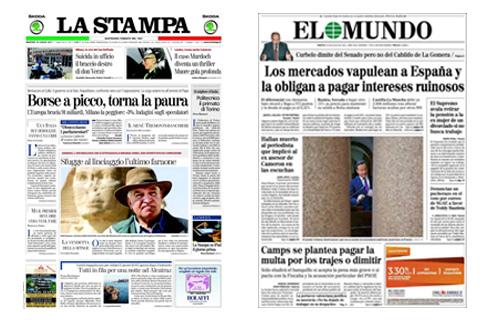 Italy and Spain in turmoil

“Stock markets at lowest levels, fear returns,” notes Italian daily La Stampa following a “Black Monday” on European stock exchanges. Milan recorded the most significant drop at 3%, though prices were rising somewhat on Tuesday morning. The Turin daily considers that austerity measures voted on July 15 by the Italian Parliament are insufficient to stop speculation sustained by “the perception that the weakened Italian government, is not able to respond in a timely manner to events and that instability will last for a long time”.

But Italy is not the only country in trouble. “The markets are whipping Spain and forcing it to pay ruinous interest rates,” laments the Spanish daily El Mundo. During this “Black Monday,” the risk premium – that is the difference in yield between German bonds, the most secure, and bonds of other countries – reached 372 points for Spain compared to 330 points for Italy. Spain must also pay interest rates of 6.32% to finance spending, which makes an economic revival even more complicated.

This week, “the worse for debt since the birth of the euro,” with the extraordinary eurozone summit scheduled for Thursday, July 21, will be a key moment for Spain, says El Mundo. The conservative daily stresses the need to call general elections after the summer break because the government of José Luís Rodríguez Zapatero “can no longer take tough decisions”. A day earlier, it was the centre-left daily El Pais that called on the head of government to step down.