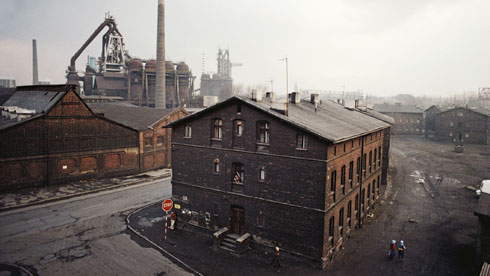 Katowice mining the past

How does a city reinvent itself and build a new identity on a lost industrial past? By betting on culture and architecture to attract tourists. This Silesian city is following Bilbao’s footsteps and will open a rejuvenated museum in January.

In October, 1997 the Guggenheim Museum was opened in Bilbao, turning a once struggling postindustrial city into a thriving global tourist magnet. Designed by Frank Gehry and costing around $100m to build, the museum was an instant success, with almost 4 million visitors in its first three years.

Katowice’s Muzeum Śląskie will not get the same media attention and will not be as popular as the Guggenheim, although there are reasons to suggest that it could have a similar effect in terms of the city’s ongoing regeneration.

The main draw for Muzeum Śląskie is not its architecture, although the building’s understated design (on the site of a former coal mine) is impressive. Like Bilbao, Katowice, in southern Poland, is no ordinary provincial industrial city and prides itself on a unique local history and identity.

Many Poles see the recent growth of Silesian “nationalism” as problematic, potentially undermining a strong nationalist narrative which has seen Poland survive partition, German occupation and Soviet-Russian domination in the past 200 years.

Katowice cannot afford to alienate potential investors in the region, regardless of where they are from. In fact, the more links they canforge unions with German businesses, the better it will be for the local economy. Formerly Kattowitz, it used to represent the south-eastern frontier of the German empire.

It was in this borderland region between east and west that the Silesian language and culture developed, along with the industrial revolution and the construction of the railways. Silesian is a dialect of Polish, but much of its most basic vocabulary is Germanic.

Being a cultural hybrid is the region’s main selling point, especially as far as the museum is concerned. Just as Catalonia and the Basque region survived suppression during the Franco era in Spain, so Upper Silesia emerged from the communist period, when Katowice was briefly renamed Stalinogród, with its local traditions relatively intact.

After the First World War, Upper Silesia was the subject of a plebiscite to decide whether it would remain part of Germany or join with the new Polish Republic. Following the Silesian Uprisings of 1919, 1920 and 1921, the League of Nations decided to partition the region between east and west.

In the inter-war years Katowice was the centre of Poland’s only autonomous voivodship (Eastern Upper Silesia), a status reflected in its grand Silesian Parliament Building (1925-29) and the modernist architecture of the 1930s which led to it being labelled the “Polish Chicago”.

Nazi occupation followed, after which all of Upper (and Lower) Silesia were fully incorporated into the People’s Republic of Poland (PRL). The coal mines provided a base for Solidarność, the powerful trade union, in the 1980s, with nine striking miners killed by riot police at Katowice’s Wujek colliery on December 16, 1981, shortly after the introduction of martial law.

Since the collapse of communism there has been a revival of Silesian identity, which culminated in the census results of 2011. The museum’s curators face a difficult task in trying to negotiate the politics of this unique and complex historical narrative. They certainly have a location and building that will do it justice, and the aim seems to be to create a modern interactive display similar to that of the Warsaw Rising Museum.

Muzeum Śląskie is just one part of the city’s ambitious regeneration projects. Katowice’s train station and main square are both undergoing large-scale reconstruction. The museum itself is part of a “cultural zone”, which will also include a new home for the Polish National Radio Symphony Orchestra. Nearby Mariacka Street has become a focal point for the city’s nightlife following its pedestrianisation in 2008.

One of Katowice’s biggest problems is that as a city of just over 300,000 (the tenth biggest in Poland), it struggles to command the attention it deserves as the centre of one of the largest urban areas in Europe. The formation of GZM (the Upper Silesian Metropolitan Union) in 2007 may help give the agglomeration a greater sense of collective identity going forward. The success of Katowice’s regeneration will be measured partly on how much impetus it provides for similar schemes in neighbouring Chorzow and Bytom.

When completed, the new Muzeum Śląskie will at least offer a good reason to make the trip to downtown Katowice. Bilbao has shown that it’s possible to reinvent a postindustrial city, providing inspiration for similar regeneration schemes in Manchester’s Salford Quays and Newcastle’s Quayside.

Expectations are now high that Muzeum Śląskie will be able to fulfil that potential and, like the Guggenheim in Bilbao, put the city back on the map.

The Louvre goes down the mine

On December 4, the famous Parisian museum opened a branch in Lens, a depressed mining area of northern France.

Liberation enthuses that it “digs” the new museum space. The gamble on whether the new museum would work “wasn’t clear to anyone,” writes the newspaper, as the area has “preserved its image as a black, ruined country” from its history as a mining and industrial region. However,

In the mining area, there’s a wish to believe that the arrival in Lens of the Louvre will have the same effect as when the Guggenheim Museum arrived in the Basque working class city of Bilbao.

To make sure its gamble paid off, the Louvre did not skimp on exhibits. More than 200 works from antiquity to 1850, plus temporary exhibitions – in particular, “Liberty Leading the People” by Delacroix, “Baldassare Castiglione” by Raphael and “The Virgin and Child with St. Anne” by Leonardo da Vinci, which have been loaned to Lens for one year. Le Monde, which looks benevolently on this museum in this “odd place”, warns however that –

A museum is not enough unless it comes with infrastructure, such as hotels, which would allow the region would profit from the benefits the museum can generate. Outside the walls of the Guggenheim, for example, the Basque authorities have invested €735m into sprucing up Bilbao itself.