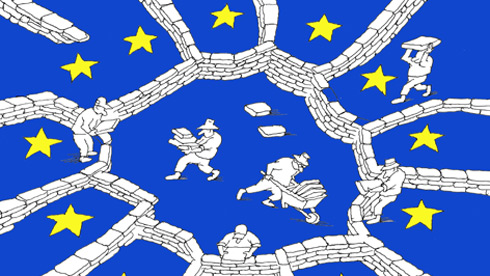 Keep calm and carry on

From Scotland’s membership of the EU should it split from the UK, to handling requests for military help to put down pro-independence movements, the recent rise in European secessionist spirit poses tricky questions for the Union. EU leaders should keep their cool, argues a Greek journalist.

Despite claims to the contrary, the EU is essentially a union of nation states, and it will remain such until there is a radical overhaul of the acquis communautaire, which, at present at least, is not foreseen.

There is no better proof for this assertion than the fact that, even after its “upgrade” in the Lisbon Treaty, the European Parliament – the only institution directly elected by the people of Europe – is also the weakest of them all.

When the financial and sovereign debt crises posed an existential threat to the EU, the decision-making process immediately shifted from community institutions to national representations.

But when the integrity of its nation states comes under threat, the EU cannot keep a safe distance from the events unfolding in Flanders, Catalonia, or Scotland, much as some of its stakeholders would like to do so.

The recent resurgence of secessionist movements, in the aftermath of the crisis, will pose multiple challenges for Brussels.

Firstly, European regions aspiring to independence have already started to ask disturbing questions, implicitly for the moment, but soon also explicitly: Will Scotland have to re-apply for EU membership if its people vote in favour of independence in the 2014 referendum? Will Catalans be deprived of their current European citizenship if they choose to secede from Spain? How will the EU react if one of its members asks for security assistance because it faces a “national security threat” in the form of an independence movement?

Conventional legal wisdom says that if a new state pops up into existence in Europe, then it will have to go through the whole accession process and secure unanimous approval by all existing members of the Union before being accepted into the club. According to the Lisbon Treaty, European citizenship is “complementary” to national citizenship of a member-state.

Even if the EU could politically and legally handle an isolated secessionist incident (say, Scotland), a potential knock-on effect of similar demands in the Basque country, Catalonia, South Tyrol, Flanders, Alsatians and Corsicans in France, Poles in Lithuania, Frisians in the Netherlands and Muslims in north-eastern Greece would destabilise the Union as a whole.

Even today, the very fear of secessionist movements influences the conduct of EU policy. For example, five out of the 27 EU countries – Cyprus, Greece, Romania, Slovakia and Spain refuse to recognise Kosovo – in case it would embolden separatist movements on their home territories.

The situation is especially complicated in Cyprus, the only EU member state which, according to the UN, is partly under foreign (Turkish) occupation. EU approval for secession by any given region in Europe would be seen by Cypriot authorities as a green light for a de jure partition of the island.

Even in less complicated cases, such as the UK, a positive EU approach to Scottish independence would place further strain on London-Brussels relations.

So how should the EU respond? Above all, by keeping its cool.

Secessionist movements are not irreversible. For example, opinion polls show that in Scotland a clear majority is set to vote for the country to remain part of the UK. In Spain, the polls say Catalans want a referendum but they are divided on whether they will vote for or against independence.

Nationalists in Flanders appear willing to settle for a confederation rather than a full break-up, while the conundrum of who would get Brussels is difficult enough to help hold Belgium together.

The EU should adopt a clear position on the legal status of the breakaway regions – people aspiring to independence are entitled to make informed decisions. Feeling in Scotland and Catalonia demonstrates that the probability of being expelled from the EU is a strong deterrent to secession.

In most cases of secessionist movements, the major argument is that their people are sick of “subsidising” either their central government or poorer regions. The more effective use of EU structural funds in order to help poorer regions to catch up could be a matter of survival for some member states.

It is now almost certain that a Treaty revision process will start immediately after the 2014 EU elections. So far, doomsday scenarios about a eurozone or an EU break-up have proven dead wrong.

The crisis has sped up the European unification process in almost every respect – fiscal, financial, political. As the EU moves towards even more integration, its regions should also be given a stronger role in decision making.

The case of Germany – the most successful federal state in the EU – illustrates that strong regional governance and federalism are not incompatible.

On the contrary, regional self-rule in Germany gives democratic legitimacy to the federal structure.