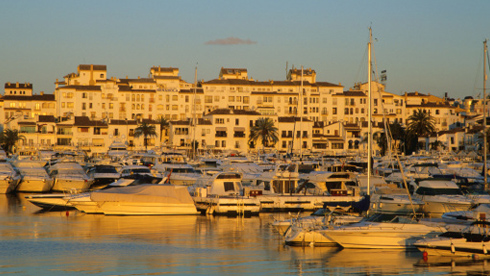 It’s not just the climate drawing increasing numbers of Russians with fortunes that are more or less legal, to move to Marbella and Malaga. The authorities are likely to turn a blind eye while the state prepares to open the EU’s door to these generous potential investors.

The poster with panoramic pictures of the Kremlin, a white-blue-red flag of the Russian Federation, and finally a big inscription in Cyrillic: “A wide selection of goods from Russia,” catches the eye. True, the shelves hold everything your heart desires – from buckwheat through to plum jam and even sauerkraut. In Spain, these goods are normally in short supply. But, the hypermarket in Marbella, in the middle of the famous tourist destination of the Costa del Sol, not only refills the shelves everyday, but also offers products at low prices.

For just over a euro, you can even get quark, impossible to come by in other regions of the country – Russians have quite unexpectedly become the most desirable customers along the Costa del Sol.

According to the Spanish Ministry of the Interior, back in 2007 the Russians accounted for only 1.1 per cent of all purchases made by foreigners in Spain. But last year their number already exceeded 8 per cent and is growing. Also, in local bars and shops the Russians spend on average more than twice as much than other nationalities.

What is more, they continue to grow in numbers. Last year, Spain was visited by 1.2 million tourists from Russia, four times more than in 2007. It’s already evident that yet another record will be broken by December. No wonder that the local authorities are going to open a permanent representation in Moscow in September, from where, incidentally, you can catch a direct flight to Malaga and Almeria every day.

Too exclusive for Shakira

Malaga is the capital of the Costa del Sol, a place where Russians are more often arriving as permanent residents rather than tourists. Last year, almost one in every 10 houses sold in the province of Málaga ended up in Russian hands. According to official records, just over 4,000 Russians have permantent residency here, but the local media estimates that number to be as much as seven times higher.

They are no ordinary residents. They settle mainly in the so-called “Golden Triangle”, at the heart of which is Marbella. Although the city is struggling with the same problems as the rest of the country – corruption scandals and high unemployment – this is not something you can see on everyday basis. Certainly not in Puerto Banús, an enclave for the rich located slightly out of the way.

“One million euros,” says Andrei Vlasenko. His eye does not flinch when he mentions the average sum his clients will have to spend to buy a home here. He came to Spain from Moscow 15 years ago, and since 2007 he has been running the real estate agency Costa Garant together with his partner, who is also a Russian.

[[In Moscow alone there are more than 250 agencies dealing in real estate transactions exclusively in Spain]]. Through them, Russians dominate the luxury real estate market in the “Golden Triangle”. The top agencies in Puerto Banús display signs in Cyrillic, with English text below, and the local language advertised only in the smallest print. “You would not expect Spaniards to buy from a Russian agency. And even if they wanted to, they would not be able to afford it,” smiles Vlasenko.

He trades with serious customers. He even had come who opted for a home in La Zagaleta. This marks the imaginary boundary dividing the ordinary rich from the real big spenders. Located on the green hills and with scenic views of the surrounding countryside and the coast, La Zagaleta consists of only 220 villas. The smallest plots have 3,000 square metres and the largest more than 10,000. Prices start at €4m and soar up to around €25m. To buy a property here, it is not enough to just be rich. Residents have the right to veto potential neighbours who could attract too much attention. Previous would-be residents who have been turned down include pop star Shakira and football player David Beckham. But Yuri Luzhkov was not treated with such disrespect. Apart from three beehives and a small orchard, the former mayor of Moscow also owns a private hunting ground in the area.

Some Spanish media speculated that there are more reasons behind the sudden Russian buying spree than simply the resort’s 320 days of sunshine a year and fresh mangos. The crisis is in full swing and it does not look like it is likely to end anytime soon, so the government in Madrid is frantically looking for additional cash. Last year it announced that it would grant permanent residency to all foreigners who invest at least half a million euros in the country. Newspapers speculate that this permit will help many Russian businessmen do business in the European Union. The new law is set to come into force in autumn.

Laundering in the sun

In January, Zakhar Kalashov became one of the heads of the Russian Mafia, even though he had stayed in a Spanish prison since 2006. He was promoted to the job when at the beginning of this year his father-in-law, Aslan Usoyan, better known as “Grandpa Hassan”, was shot dead in the centre of Moscow. He was the most powerful gangster in the former Soviet Union and the informal chairman of the so-called “Club 11”, the council bringing together the bosses of Russian criminal groups. Kalashov not only jumped into his seat in the mobsters’ council, but he was also said to chair the Athens meeting of Mafia bosses from his cell.

Prior to his arrest, Kalashov operated from his “office” in Marbella, located in an impressive villa, dubbed little St. Petersburg by the investigating team. He was sentenced to nine years in prison and a fine of €20m for money laundering. This is the modus operandi of Russian mobsters in Spain. They do not dirty their hands with violent crime, they prefer illegal financial operations and corruption.

The fact that the successor to Grandpa Hassan is still in prison has been the only success of the Spanish justice system in the fight against eastern European organised crime up until now. The local prosecutors are otherwise displaying almost total helplessness. [[Three showcase Mafia trials in the recent years have ended in nothing]], with no convictions for either the criminals or their local partners.

Among these partners, only the former mayor of Marbella, Jesús Gil went to jail, where he later died. He was an emblematic figure for shady Russian dealings with the Golden Triangle.

He was forced to resign after being convicted of large scale embezzlement, which lined the pockets of several people including colleagues from the east, many of whom were associated with the Mafia. Earlier, on behalf of the city, Gil accepted a gift from his friend Yuri Luzhkov: a statue named Victory standing on a 26-metre column, made by Zurab Tsereteli, President of the Russian Academy of Fine Arts. It represents a strong man with hands raised in a gesture of success. The only thing missing is a Cyrillic version of [Julius Caesar’s famous words]: “Veni, vidi, vici” (I came, I saw, I conquered).