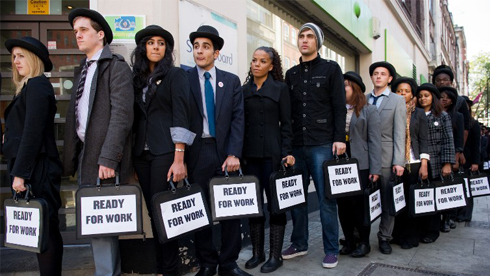 The financial crisis has left behind 14 million young Europeans with neither employment nor training, yet nobody is mentioning them in the talks over the EU budget. What if a little money was spent on bringing them into the world of work through the Union, wonders a French consultant.

Thanks to the subprime crisis, you may have heard of the American “Ninjas” (“no income, no jobs, no assets”). Have you heard of Europe's Neets?

The Neet is between 15 and 29 years old, and has got nowhere: no job, no education, no vocational training. You don't have to look far to spot a Neet among his family, friends or neighbourhood: there are 14 million of them in Europe. One youth in six.

The Neet, though, has begun to get expensive: €153 billion every year in lost economic revenues, according to a study by the European agency Eurofound. This is more than the annual European Unionbudget of €142 billion.

Have Europe's Neets been following the recent farcical discussions that have broken down over the EU's budget for the next six years? Do they know that Europe's Brussels, contrary to what one might believe in these times of crisis and austerity, is immensely rich? So rich that it plans to hand out rather freely no less than €1,000 billion over the next six years?

That's €420 billion for agriculture, and €300 billion for “cohesion for growth and employment”, which are in fact transfers from rich areas to poorer regions. And too bad if, 15 French regions have a per capita GDP lower than that of Greece, and, the €350 billion poured in over the last six years has had doubtful effects on cohesion (see Greece), growth (a fall of 0.3 per cent expected in 2012) and employment (25 million unemployed in the EU).

There is also €58 billion for “Europe, a global player” – although Europe, owing to the absence of a European defence policy, has been markedly absent in resolving any of the recent conflicts and disputes around the globe (in Libya, Syria, Israel-Palestine, and Iran). And let's not overlook the €56 billion for the European Union's administrative expenses.

Another fiscal policy is indeed possible. It would be to stop subsidising the past mistakes of the Union and to focus finally on its future: on its youth, and primarily the Neets.

It has escaped no one that, in defending their national interests or bureaucracies, the leaders of the Union have been mulling over abolishing the Erasmus programme outright – the only real, concrete, tangible and successful pan-EU project of recent years.

Since its inception in 1987, Erasmus, has allowed three million European students to study in one of the other countries of the Union, helped by a very modest grant of €250 a month, per student. This has helped to foster a European spirit and European reality, which is quite a contrast to the retrograde steps we are witnessing today, such as the withdrawal behind national borders, the lack of projects for the new generation, and short-term management of financial emergencies. Since it started, Erasmus has cost €4.1 billion – less than the payment errors in implementing the European Union budget in 2011 (€4.9 billion).

The time has come not to bury Erasmus, but to strengthen it by proposing an Erasmus programme for employment. This programme could subsidise, at the level of social security outlays, one million fixed-term contracts a year in the private sector – real jobs in the market economy.

Each year it would give one million young Europeans the opportunity first of all to work, and then to work in another EU country. This means travelling, learning to work in another culture and in another language. Forget narrow nationalism and fatal protectionism and let European businesses thrive, rather than their bureaucracies. Assuming an average annual salary of €20,000 and social contributions through a payroll tax of 40 per cent, we are looking at a grant programme of € 8 billion annually. Is it too much to ask that six per cent of the European Union's budget be spent on such an investment?

It would prove the advocates of austerity and keeping a tight rein on the EU budget right. This budget of €1,000 billion is a slap in the face to states, households and businesses trying drastically to reduce their deficits and their spending. If it is an investment that we must preserve and build on, it is an investment in our future. To create an Erasmus employment project would give hope to European youth, create a growth dynamic for everyone in Europe and strengthen the European Union spirit. The programme would also boost the competitiveness of European businesses by reducing the costs of hiring new personnel. And finally, it would bring some legitimacy back to the European institutions of today, so far removed from the realities of businesses and of ordinary people.