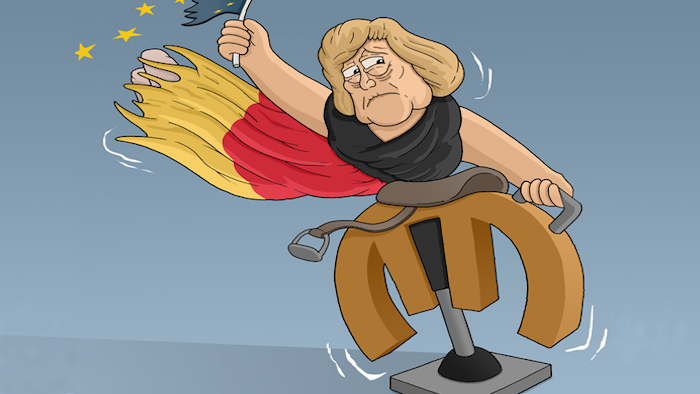 Let’s kick Germany out of the Eurozone

Germany's towering trade surplus is the key force behind Europe's economic malaise, writes Patrick Chovanec in Foreign Policy. And Berlin’s departure from the Eurozone would help rebalance both the European and the global economy. Chovanec deploys the ideas of nineteenth-century economist David Ricardo to argue that Europe's trade imbalance must be reduced by increasing Germany's domestic demand – and therefore its borrowing. Historically, Germany's surplus income has been lent back its neighbours, resulting in Europe's current debt crisis —

It’s hard to argue that Germany’s excess savings, which its banks often struggled to put to use, were well invested. Instead, they gave Germans the illusion of prosperity, trading real work (reflected in GDP) for paper IOUs [debt acknowledgement] that might never be repaid.

Under normal circumstances, Chovanec continues, exchange rates would narrow the gap by boosting the competitiveness of Germany's trading partners. But the fixed rates of the eurozone do not allow for this re-adjustment. The zone's debtor nations are forced to move "in lock step" with the German economy, so their trade imbalance can be reduced only by decreasing demand for imported German goods. This requires a plunge in overall consumer demand. The eurozone's southern members have reduced their deficit with Germany, but at the expense of growth.

For Chovanec, it is not a question of Europe's economies becoming more like Germany, but rather of re-thinking what Germany does with its surplus —

The excess savings are already there; the only question is where to lend it all. Borrowing it domestically to drive a genuine European recovery might be preferable to (once again) throwing it at foreigners to buy things they really can’t afford.

A German exit from the euro would give a competitive advantage back to its debtors, increasing domestic borrowing and allowing the surplus to be spent at home. This would relieve pressure in Europe and globally, since Germany's reliance on the American market – "the world’s consumer of last resort" – has also led to ever more debt, and to fears that it may never be repaid.