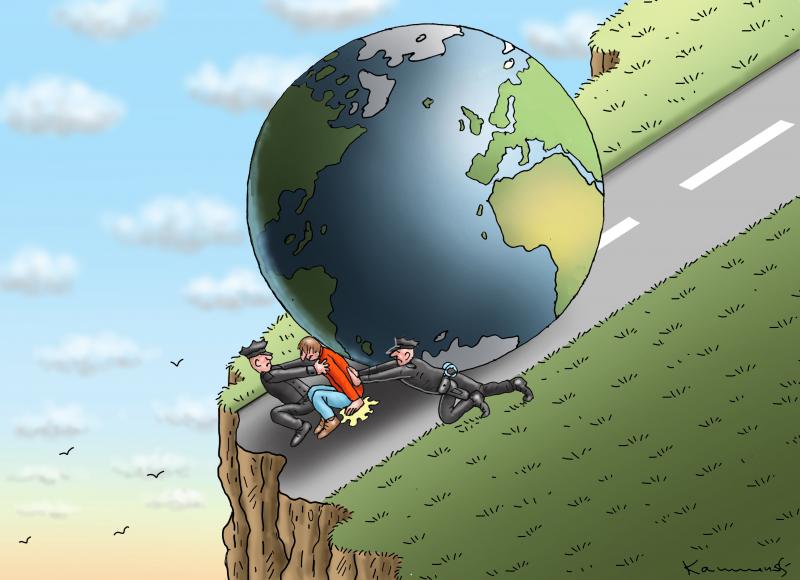 The Letzte Generation climate activists – a necessary shock to the German system?

Does blocking roads by glueing yourself to the ground or throwing tinned soup at Old Masters help or hinder environmental awareness? In Germany, the latest crop of activists to appear on the scene, Letzte Generation, raises the question of strategy in the face of a global emergency.

Are the "commando" operations of the German environmental group Letzte Generation (Last Generation) a necessary and salutary system shock in response to the ongoing climate crisis? Or are they simply the useless manifestation of violent, existential anguish? What is certain is that the activists have not been discouraged by the 13 December 2022 police raids carried out on eleven apartments occupied by activists suspected of "forming a criminal organisation", as part of an investigation into an attempt to block an oil refinery. Two days after the raids, activists were already "besieging" the federal deputies in the Bundestag, glueing themselves to the ground to block access to the Parliament’s underground parking.

“One of the peculiarities of Letzte Generation, which has sister organisations around Europe, is being a movement that has risen from the grassroots, without a name, or any stable funding, or support from a political party, but with undeniable effectiveness and capacity for action”,  says Berlin sociologist Dieter Rucht, a specialist in protest movements.

Since the start of the year, the group’s actions have numbered in the hundreds across Germany and Austria. “Now when I’m working I pay attention to the radio so I know where they’ve stuck themselves”, says Memet, a Berlin taxi driver.

While the movement may appear radical, argues Dieter Rucht, "it is in line with the philosophy of civil disobedience, with a refusal to attack people, a desire to avoid material damage, and a commitment to non-violence, even if its actions create disorder and frustration."

Glueing their hands to asphalt - to block a major urban artery, a ramp that connects the city to the airport, or even the runways of the Munich and Berlin airports - has become the group’s emblematic act, each time triggering travel chaos and the blind rage of motorists on their way to work.

"We’re happy when the police arrive," admits one activist, who calls for the immediate introduction of a 100 km/h speed limit, a nine euro regional train pass, and a more radical renewable energy development policy.

The other notable specialty of the movement is attacks involving world-famous paintings. In Potsdam they hurled mashed potato at a Monet, an action modelled on the tomato soup attack on a Van Gogh in London.

"The tomato soup on the Van Gogh in London spread in no time to South Korean messaging apps and social networks," notes ironically the German gallery owner Esther Schipper.

Whether such actions are met with disapproval or support does not change anything: the activists have made their mark on the media, and the whole world knows of their work.

Mostly young adults, these activists have usually cut their teeth in the Fridays for Future movement launched by Greta Thunberg in Sweden.

"Before I was in Letzte Generation, I was in Fridays for Future and then Extinction Rebellion," says Aimée van Baalen, one of the movement's spokespersons, appearing on the German TV network ZDF. "But the gigantic demonstrations and weeks of action didn't change a thing. So I decided to put all my energy into a permanent protest movement that demands rapid action from the political world."

Van Baalen stresses that she is not there to "throw everything away", but rather because she is afraid for tho…