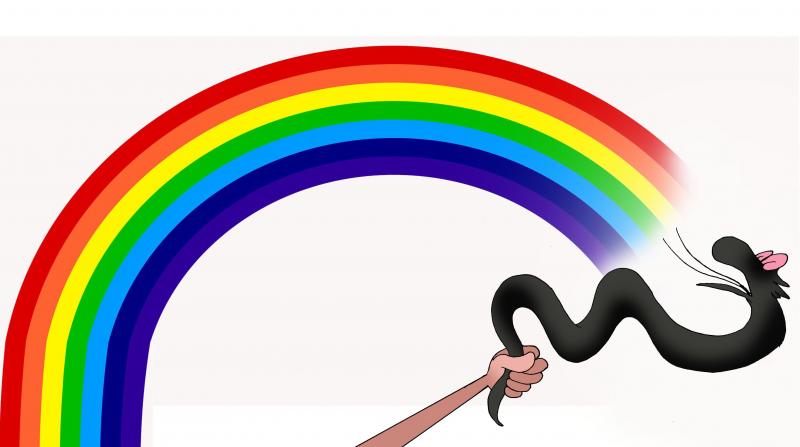 LGBT+ rights in Ukraine are still a battleground

Since gaining independence in 1991, homosexuality in Ukraine has no longer been criminalised. However, following the upsurge of nationalism after Euromaidan, public attitudes towards the LGBTQIA+ community have scarcely improved. The current war with Russia presents both a new challenge and an opportunity for greater visibility.

Before Russia invaded Ukraine, Sophia and Sasha lived in Odessa: Sophia was a psychology student, while Sasha worked occasionally in fast food restaurants. They arrived at the LGBTQIA+ shelter in Chernivtsi in early March, and Sophia's mother and 11-year-old sister joined them soon after. "It's not always been easy to live together," Sophia admits.

"Mother is homophobic. I explained to her that this was an LGBTQIA+ shelter and that I had nothing else to offer. When she arrived from Kramatorsk, she struggled for a long time to settle in, and never talked to anyone. There were a lot of different people here: gays, lesbians, trans people. Mum was in a bit of a state, and took out her frustrations on me.”

"LGBTQIA+ people continue to be seen as deviants, as a threat to 'traditional' families, seen as the basis of the Ukrainian nation. The same refrain as in Russia," says Olena Shevchenko, the director of Insight, an NGO that runs the Chernivtsi shelter, among others.

Ukraine abolished the law criminalising homosexuality after gaining independence in 1991, but tolerance towards the LGBTQIA+ community has not improved. New cases of harassment, stigmatisation and violence against sexual minorities are still appearing. Two years ago, the NGO Nash Svit recorded 131 cases of discrimination and violence against LGBTQIA+ persons. Between 2012 and 2013, it reported 50 such cases.

The organisers of the first ever Ukrainian Pride march found themselves forced to cancel the event for fear of their safety. A year later, in 2013, 50 people marched through the streets of Kyiv under the protection of 1500 police officers. While there was no violence, participants had to change their means of transport several times to avoid confrontations with counter-demonstrators. In February 2014, rainbow flags were seen flying at the Euromaidan protests. An LGBTQIA+ march had taken place earlier that year.

Following the Revolution of Dignity (as Euromaidan is sometimes known), LGBTQIA+ rights, which are a necessary condition for European integration, finally appeared at the Ukrainian government's table. In 2015, the Ukrainian parliament introduced the first legislative change in the history of independent Ukraine regarding LGBTQIA+ people: the Labour Code was amended to recognise the same rights for all workers, regardless of their sexual orientation or gender identity.

However, these changes exist only on paper. The reality is much less rosy: with the post-Euromaidan nationalist upsurge, public attitudes towards LGBTQIA+ people have deteriorated. Right-wing political groups, leveraging the support of a substantial chunk of the population due to their active role in the revolution, began to promote a vision of the Ukrainian nation based on traditional, conservative values.

LGBTQIA+ persons began to be presented as a threat to Ukrainian identity. The war in the Donbas and the annexation of Crimea has only aggravated this trend, as nationalist groups stoke hatred towards representatives of minorities – anyone "outside the norm".

With the war comes a militarisation of the whole society, leading to the image of traditional gender roles being reinforced. "Men are expected to take up arms to defend their country, while women are expected to leave the country and seek refuge with their children. In a highly pressurised society, anyone who deviates from this norm can expect to be excluded or discriminated against," explains Maryna Shevtsova, an LGBTQIA+ rights researcher.

War reinforces hatred. Olena Shevchenko has experienced this first-hand: in April, she was pepper-sprayed on the street in Lviv while unloading humanitarian aid packages.  "The offenders have become more aggressive," she says. "They know they won't be prosecuted, everyone has gone to war."

The invasion is an important moment for the LGBTQIA+ community: it is a time to demonstrate our commitment, to become more visible, so that the situation in 2014 is not repeated.

The LGBTQIA+ community is afraid of violence not only from Ukrainians, but also, and especially, from Russians. "Stories are circulating," says Olena Shevchenko. "We know that in the Donbass and Crimea LGBTQIA+ people are being tortured, harassed and even murdered."

For LGBTQIA+ activist Vera Chernihina, "a Russian occupation would be catastrophic for the movement. All the work we’ve invested in fighting for our rights would be for nothing. Before the war, we worked with the police. I also met with European Union representatives many times. We could see that things were changing, that there were more and more people at the marches."

According to some experts, the gains made by Ukrainian NGOs for LGBTQIA+ rights are already largely lost. Last May, at a conference on the International Day against Homophobia, Transphobia and Biphobia, Victor Madrigal-Borloz, a UN expert on gender-based violence and discrimination, reported discrimination against transgender women during the evacuation of invaded regions: "they were not allowed to board the trains.”

Maryna Shevtsova has also heard about these incidents, yet remains hopeful. She believes that Ukrainian society will be more tolerant once the war is over. "Millions of Ukrainians are now living all over Europe, in contact with other cultures. I’m hopeful this will make some people more open to diversity.

A survey conducted last May by the NGO Nash Svit on Ukrainians' attitudes towards the LGBTQIA+ community already shows growing tolerance. In 2016, only three percent of respondents reported having a positive attitude towards LGBTQIA+ people; in 2022, the figure is almost 13 percent. The percentage of people declaring a negative attitude towards LGBTQIA+ people has fallen from 60 to 38 percent.

As for the European Union, not enough has been demanded of the Ukrainian government, writes Maryna Shevtsova in a 2020 article entitled Fighting "Gayropa". The EU called on the Ukrainian government to combat rising intolerance and homophobia and to punish hate crimes as early as 2015, but the Ukrainian criminal code has still not been amended, due to the influence of the church and the religious lobby. Moreover, some of the more conservative elements of Volodymyr Zelensky’s pro-European centrists, Servant of the People (SN), have also declared themselves hostile to LGBTQIA+ equality, and defend "traditional" family values.

In 2020, MPs Heorhiy Mazurashu and Olena Lys proposed a draft law "Combating Homosexual and Transgender Propaganda" that bears striking similarities to the homophobic law passed in Russia in 2013. Human rights defenders, LGBTQIA+ activists and the Ukrainian parliament’s Human Rights Commissioner have condemned the document - unlike President Zelensky. Indeed, to the great disappointment of the LGBTQIA+ community, Zelensky has never taken a clear stand in favour of their cause.

Some activists, including Olena Shevchenko, remain sceptical about recent promises to introduce marriage equality. "We have been waiting for a change in the law for years. We expected more concrete action from Zelensky. The president simply said that everyone should have the same rights, nothing more. He couldn't come up with anything better than this lamentable banality."

Despite their difficulties, the LGBTQIA+ community continues to fight for their rights, as well as their country: according to the survey conducted in May by Nash Svit, almost 66 percent of respondents support the participation of LGBTQIA+ people in the defence of their country against the Russian invasion.

LGBTQIA+ people are already known to have fought in the Donbas, recalls Vera Chernihina. "There is even a special battalion of sexual minority fighters, in uniforms adorned with unicorn insignias. In 2019, they participated in the Kyiv pride march. The invasion is an important moment for the LGBTQIA+ community: it is a time to demonstrate our commitment, to become more visible, so that the situation in 2014 is not repeated. Back then, people said the only right we had was to keep quiet, because we didn't participate in Euromaidan. This isn’t true, though we weren’t visible. So people had good reason to harass us. The reasoning was: 'we participated in the war, you didn't, so you can't ask for more rights, because you are not real Ukrainians'."