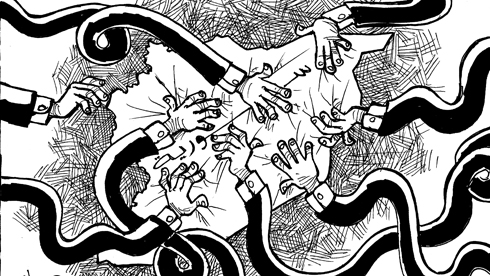 Major powers in a strategic deadlock

To resolve the Syrian conflict, Europeans, Russians and Americans are reviving the time-honoured policy of promoting grand peace conferences. But this time, the local situation is beyond their control.

Some crises can turn out to be living textbooks for students of diplomacy and international relations. Syria is a case in point – especially now, when everyone is talking about the upcoming peace conference, a genre more typical of the classic diplomacy of the 19th and the beginning of the 20th Century than of the present.

Keeping with the well-known adage "If you want peace, prepare for war," weapons are being spread round everywhere in the lead-up to a hypothetical "round table" intended to bring all the parties together to decide on what comes next.

The European Union has decided not to renew the embargo on arms shipments to Syria (ie, to the insurgents). Although Britain and the France were alone in having actively worked to have it lifted, while the other countries of the Union expressed, to varying degrees, their doubts about the usefulness of a real commitment to the civil war, London and Paris achieved their purposes – at the price, though, of a yet another display of the European Union’s lack of unity on the international scene.

The inability to reach agreement due to differing interests is obvious. This is not about strategic calculations but about the will to take an interest in a problem. As they did in the past, Great Britain and France are playing at being great powers because they consider themselves obliged to participate in events of world importance. Other countries are either indifferent or afraid to get caught up in processes that, for the most part, do not concern them.

Threat to use force is real

Moreover, there is a political motive in the announcements of aid to the insurgents. The question of sending arms or not remains open. And the fact of announcing the lifting of the embargo means that the use of force remains a very real option. In other words, if there is no agreement during the Geneva-2, this will be a war fought until one side destroys the other. The main instigator behind the lifting of the embargo on the deliveries of weapons to the insurgents, William Hague, said that pressure must be put on the regime.

This is the same logic that drives Russia, in neither confirming nor denying it will give Damascus C-300 missiles and other sophisticated weapons. In short, the balance of power will be preserved. It is, therefore, useless to hope that the issue can be settled by military means if political negotiations fail.

In principle, such a tactic is not devoid of logic: the parties that have to be sat down around a table have to feel a sword hanging over their heads. Washington’s public reflections about possible no-fly-zones over Syria come from the same calculation. We already know from what happened in Libya what an air exclusion zone is and what this type of decision leads to. A repetition of that scenario is precisely what Russia is protesting, in promising to deliver (perhaps it already has) the air-defence missiles, which renders a hypothetical operation unnecessary. The United States will probably not prohibit overflights of Syria, but they have set the bar high, to make the parties more conciliatory.

All the same, the effect can be the opposite. At the moment it seems that the opposing sides are drawing the same conclusions from the various diplomatic games: whatever happens, they will be neither abandoned nor weakened; and so it’s worth holding out. Bashar Al-Assad and his opponents all grasp that their respective patrons, Russia and the West, cannot refuse their support without suffering a loss of face.

Indeed, and for Moscow and Washington both, what is at stake in Syria is a matter of principle. Russia is defending the rulers of secular countries (regardless of their level of authoritarianism) and the principle of non-interference in the internal affairs of a third country, trying to forget the unpleasant Libyan precedent to which she contributed [Medvedev was still President when Russia, contrary to all expectations, abstained from the vote at the United Nations concerning Western air intervention]. On the Western side, the debate is torn between ideological blueprints, which see a "people in revolt" who have risen up against a "bloody tyrant” and the desire to consolidate the model of conflict resolution that gradually settled in place after the Cold War – namely, back the “good guys” and help them win power. And so the refusal to support “your own" isn't just a pragmatic way of guarding one’s back, but an ideological concession that wounds your self-esteem.

Past peace conferences, up to those at Yalta and Potsdam, focused on big business, namely the carving up of the world. The most recent conferences were those on the Balkans – the Dayton Agreement on Bosnia in 1995 and the Kosovo crisis in 1999. It is worth remembering these two experiments, since they offer two possible scenarios for Syria. The Dayton scenario is the positive one. The United States and the European Union, helped by the then weakened Russia, brought the belligerents together and forced them them to build a workable model for Bosnia and Herzegovina. This is an example of what the optimists who believe that "Geneva-2” can succeed envisage.

Pessimists will remember the beginning of February 1999, when the Rambouillet conference got underway, after enormous diplomatic efforts, to settle the Kosovo conflict. But nothing came of it: the mutual exasperation reached a peak of tension as the Kosovo Liberation Army, feeling the support of NATO at its back, decided to focus on a military victory, while Belgrade could not imagine sharing power with "terrorists". However, the conference ended without an open rupture. After it, the position of the mediators (mostly NATO members), however, turned hard and unyielding. Belgrade was given an ultimatum, and its refusal to comply triggered the launch of NATO’s military campaign, a month and a half after the start of the peace negotiations in France. While no drawing of any parallel with Syria is meant here, the scenario of a rapid escalation of violence cannot be ruled out if no progress is made (any progress at all is hard to imagine).

Today, of course, Russia is playing a very different role. In 1999, Moscow also protested strongly, but did not actually offer any opposition. Today, the Kremlin has made it clear that it will play its part in the balance of forces and will not allow any campaign against its protege to succeed.

That is a critical difference between the situation in Syria and what came before it, including Yugoslavia. In organising the peace process, in meddling in local conflicts, the major powers have always pursued concrete interests, with a clear idea of their own advantage. The states of western Europe, actively backed by the United States, have reshaped the European strategic landscape in accordance with their notions about the post-Cold War era. And the Yugoslavia of Milosevic was clearly an obstacle to this reshaping.

Apart from the issues of status mentioned above, the direct and concrete interests of the United States, Europe and Russia in Syria are incomprehensible.

The idea of expanding spheres of influence into the Middle East of today is almost utopian. All the outside powers are trying frantically to come up with an adequate response, but always after the fact. They adapt to the events without being able to enforce their will or desires, far less any strategy. It is notable that those who do have interests in the conflict, namely Syria’s neighbours, from Iran to Saudi Arabia and the Qatar, are saying nothing about the Geneva conference. And yet, ultimately, the ability of the enemies to engage in dialogue depends on them.

In another era, the games of the great powers were indissolubly linked to the petty intrigues of local players, who remained secondary figures. Now, the opposite is true. The “local” processes follow their own logic and the involvement of the “big powers” proceeds on a parallel plane, where the powers are constantly scrambling ahead of and dropping behind the other. For future historians, what is currently being played out is an inexhaustible lode to be mined. For diplomats, it’s an almost impossible task.