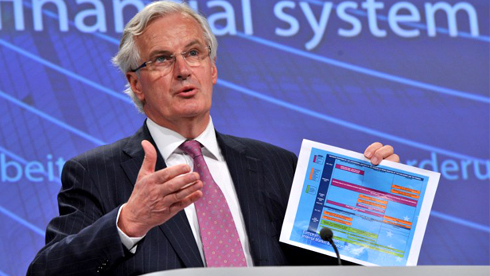 Five years after the collapse of Lehman Brothers, the man who has been on the front line of financial regulation in Europe is assessing his performance. Now that his mandate is drawing to a close, Michel Barnier has set his sights on another role in the Commission.

Michel Barnier during a press conference in Brussels in July 2011

In Brussels, Michel Barnier’s recap chart is almost as well known as Michel Barnier himself. When the European Commissioner responsible for financial services goes to meetings, he always brings an A4 print-out of his legendary chart. The more philistine among us might mistake it for an Excel spreadsheet filled with highly coloured boxes and impenetrable technical jargon.

But the big man from Savoie with the impeccably coiffed silver hair is there to explain. On close inspection, the chart shows all of the measures, which were demanded by G20 leaders in 2009, to rein in a financial services industry that had brought the world to brink of disaster. Whenever one of these measures was launched on the level of Europe, Michel Barnier coloured in one of his boxes. And the Commissioner is at pains to point out with typical seriousness that none of the boxes on the chart are unfilled.

Journalists, bankers, lawyers and, not so long ago, none other than François Hollande have all been on the receiving end of a presentation of the chart, which has recently been printed up as a more aesthetically pleasing brochure. Even Pope Benedict XVI was given a quick look on the occasion of a meeting that took place last February, three days before he resigned from the papacy. A photo of this particular moment occupies pride of place on the Commissioner’s desk…

When the former French minister looks at this document, what he sees is proof of his success. “We covered all of the fields which had to be regulated,” he explains. Appointed more than a year after the collapse of Lehman Brothers, he had a clear road-map to build a new framework for a finance industry, which had attracted the ire of all of the world’s leaders. He set about this task with voracious enthusiasm, drafting close to 30 legislative texts, all of which have either been presented or adopted. “It was a regulatory tidal wave,” complains a City lobbyist. [[Very few industry players escaped unscathed: auditors, ratings agencies, stock markets, hedge funds, banks…]] At the height of the crisis, in 2011 and 2012, approximately one third of the texts presented by the Commission came from Michel Barnier’s service.

This legislative frenzy stood out in contrast to the recent past. Before the collapse of Lehman, the Commission had been an ardent proponent of deregulation. Some civil servants in Brussels still remember the enraged reaction of Charlie McCreevy, Michel Barnier predecessor, when they dared to suggest legislating. “There is no need for legislation on finance. Go skiing or go home!”.

Evidently, in 2009, at the time of the change of Commission, it was no longer a question of holding such a conversation. The man who came into the scene amidst the post-Lehman rubble knew almost nothing of worldwide trading and derivatives. And so he got the idea of compressing his agenda into one sentence, which he has drummed in almost every week in the many conferences he gives all over Europe: “No financial player, no financial product will escape regulation." This was not chosen by chance: a few days before his official appointment at the end of 2009, Michel Barnier heard it spoken by Angela Merkel. If one wants to survive in Brussels, best to follow in the footsteps of the real boss...

Symbolically, Barnier also decided to dedicate his first official visit outside Brussels early in 2010 to London. It would be an understatement to say that the British government had absolutely no desire to have the City carefully scrutinised and regulated by a Frenchman, which was seen as letting the fox into the henhouse. "The most dangerous man in Europe," ran the headline at the time over at The Daily Telegraph, a major Eurosceptic newspaper.

Barnier always tried to keep London from feeling isolated and put in a minority situation in the negotiations around the different legislative texts he put forward. And, in fact, this has happened only once in four years – on the cap on banker’s bonuses. "I have no problem with the British, and I think that they grasped that I am not an ideologue," he says. His relations with George Osborne, the Chancellor of the Exchequer, remain touch and go, according to several diplomats. The City continues to mistrust this overly French commissioner.

For the other Europeans, the mistrust is irrelevant. The time to assess his record is drawing close, and five years after Lehman Brothers, it’s looked on favourably in community circles. In a Commission where the irresolute and the ditherers abound, he has cut a swathe with his activism. “Overall, he has managed to carry out rather ambitious reforms in a field where the pressures are very strong," is the assessment of one great connoisseur of the more arcane community matters. To take two important examples, the Basel III prudential rules will apply to the banking sector, and trade in derivative products is to be made more transparent. Some of the most spectacular innovations have not come from him – like the cap on bonuses or the prohibition on selling uncovered sovereign CDS (credit default swaps) – but he has skilfully taken advantage of these demands from Parliament.

Thus does one leave one’s mark on the map. But this success could also be his biggest failure. "This spreadsheet, it’s equivalent to ticking off checkboxes. It has no strategy behind it, and he has been unable to provide a vision in terms of the architecture of financial services", is the judgement of one manager. The main structure Europe is building on the subject, the banking union, was after all launched by Mario Draghi and certain national leaders.

[[Michel Barnier tenaciously defends his record, which will be his best ally when he tries to climb the last step remaining]]. The former Minister still clings to his European dream: and if he were to take the place of José Manuel Barroso at the head of the Commission? His name does come up regularly, although the pundits consider his chances limited. He still refuses to talk about it, no doubt feeling that he could be a compromise candidate if the European elections lead to a hung Parliament. "I am ready to go where it may be deemed that I will be useful", he contents himself with answering. There will always be time to consider drawing up a new map.