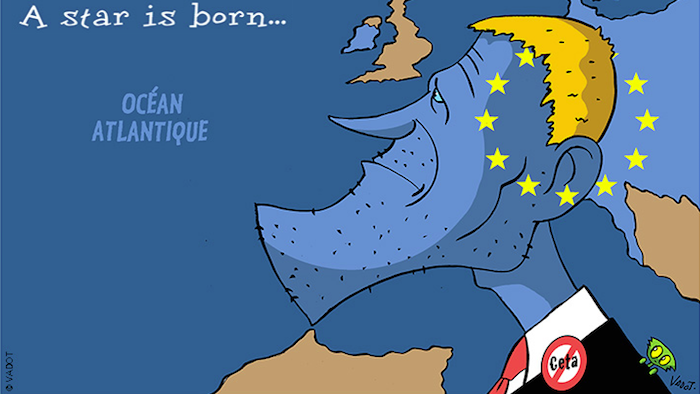 More democracy for Europe and a new star for the Left

Wallonia’s intervention in the final phase of the free trade talks between the EU and Canada may have permanently changed the way commercial treaties are negotiated. Key to this has been the conviction and strength of character of Paul Magnette, the Belgian region’s President.

On 30 October, Canada and the European Union signed the Commercial and Economic Trade Agreement (CETA) in Brussels, establishing a free trade zone and putting an end to two weeks of passionate debate after the parliament of Wallonia, a Belgian region, used its veto to delay the treaty’s signing.

Wallonia’s veto was an unforeseen consequence of Belgium’s highly developed federalism, pushed for by Flemish nationalists, who incidentally supported a rapid adoption of CETA. Last year, Wallonian MPs and their experts examined the text attentively, and in collaboration with civil society. As Socialist Minister-President Paul Magnette explained, following this period of examination, MPs came to the conclusion that the agreement did not provide sufficient guarantees for agriculture, or for social, environmental and legal protection, because it would have imposed, by default, Canada’s lower standards on European consumers and businesses.

In particular, it expressed concerns over private arbitration courts (the Investor-State Dispute Settlement (ISDS), a common system in agreements with emerging countries with an unreliable judicial system) to settle legal challenges from multinational companies to states. The ISDS would allow a multinational that has invested in a country to ask a panel of private judges (experts, jurists…) to make a ruling on that country were it to adopt a policy against the multinational’s interests. The ISDS will apply to 21 of the EU’s 28 members – France and Germany among them – who have no arbitrage mechanism with Canada. A similar measure is at the core reason for stalled negotiations on the free trade agreement between the EU and the US (TTIP).

Following Wallonia’s rejection of the treaty, Magnette was subjected to ten days of intense pressure from European leaders, from that other Socialist President, Francois Hollande, and a raft of European Commissioners. Even the popular Canadian Prime Minister Justin Trudeau, who is well liked in Europe, spoke over the phone to his Belgian counterpart Charles Michel about the sense of Canada’s “humiliation” at being referred to as the “Trojan horse for the US”. Trudeau, a liberal like Charles Michel, threatened to pull out of the negotiations at a number of points and, in one case, dispatched his Minister of International Trade, who came back empty handed after several hours of talks.

Despite the pressure and an ultimatum from the European Commission and Council, Magnette, nick-named Wallonix in reference to the indefatigable Gauls in Asterix, held firm. This was notably thanks to the support of the Socialist Party leader, former Prime Minister Elio Di Rupo, his coalition partners, who represent the majority of the francophone population in Belgium, and thousands of messages of support received by email and on social networks. Legal advisors for the Wallonian government worked on the agreement text until, in the early afternoon of 27 October – too late for Trudeau to travel to sign the agreement in the presence of the 28 heads of state and government in Brussels – the Belgian government announced it has reached an agreement with Wallonia.

The next day, it was approved by the federal parliament and signed by Trudeau and Donald Tusk, President of the European Council, on Sunday 29. While CETA’s text remains intact, negotiators have added three legally binding “interpretative declarations” on social protection and agricultural imports. The ISDS has been replaced with permanent courts, called the Investment Court System (ICS), made up of state-appointed judges with a court of appeal.

All aspects of CETA can now provisionally enter into force, except for the ICS, which the Belgian government has challenged at the Court of Justice of the EU in Luxembourg. Before the agreement formally becomes law, it must be ratified by the European Parliament (probably not before the end of the year) and by forty national and regional parliaments with the legal competencies for trade. It is a process that could take years and may hold other surprises in store, particularly in Germany, Luxemburg and Austria, where anti-CETA and anti-TTIP movements are at least as passionate as in Belgium and where the opposition is very influential at a regional level.

Throughout this saga, European institutions and Belgium’s federal authorities have displayed a certain lack of skill and underestimated the resolve (and the preparation) of Magnette and his allies. They ignored the reservations he expressed more than a year ago to the European Trade Commissioner, Cecilia Malström, and to the Belgian federal government. Although Brussels and Namur, the capital of Wallonia, regularly exchanged information of the negotiations, the Commission and the federal government decided to wait until the last minute to open negotiations. This tactic usually works, by leveraging the moral pressure of a looming international deadline with official ultimatums. But it did not succeed in the Belgian context, where brinkmanship is part of the political culture and where “everything is negotiable, except negotiation.”

Paul Magnette therefore emerges as the big winner of the arm-wrestle between little old Wallonia, with its 3.6 million inhabitants, and practically the rest of the world. The 46-year old became a social democratic icon in a matter of days, especially after a particularly inspired speech in the Wallonian parliament, a beacon of opposition to triumphant neoliberalism and of democracy against the opaque and arrogant negotiators in Europe and across the world.

Magnette came to politics late and is considered the natural heir to former Prime Minister Elio Di Rupo at the head of Belgium's francophone socialists. He is an unusual figure on the European political scene: a committed europhile – he is the author of a number of books on the EU, including Contrôler l’Europe. Pouvoirs et responsabilité dans l’Union européenne and Une Europe des élites ? Réflexions sur la fracture démocratique de l’Union européenne – he does not communicate in slogans and genuinely aims to stitch back together the rupture between citizens and European institutions, a key source of the Union’s current stagnation. His vision for openness and transparence in the European public debate is inspired by Kant and the German political philosopher Jürgen Habermas, sharing with him the view that the EU needs more popular politics and education, bringing together EU institutions and citizens. This intellectual rigour helped Magnette cope with the enormous pressure during the weeks of fierce debate surrounding the CETA negotiations. It also gave him an opportunity to test out his theories on the functioning of Europe’s democracy. These are theories he has attempted to apply to Charleroi, the working-class city now a symbol of Wallonia’s post-industrial decline and of local Socialist Party corruption, where he has been the mayor since 2012. It has become his personal political laboratory, especially since becoming a federal minister (for energy and climate) and, since 2014 President of Wallonia.

The CETA controversy has equally served as a reminder that parliaments can and must still have a central role in western democracies: guaranteeing that laws do indeed correspond to the public interest and serve as driving belt between citizens and international institutions for the interest of all. Finally, this affair has probably changed the way that commercial agreements are negotiated: even if European treaties give it a mandate, the European Commission will no longer be able to negotiate them alone and behind closed doors, without publicly discussing the state of discussions with the parliaments of member states and, more broadly, public opinion. And that is already a step forward towards a more transparent and democratic Europe.