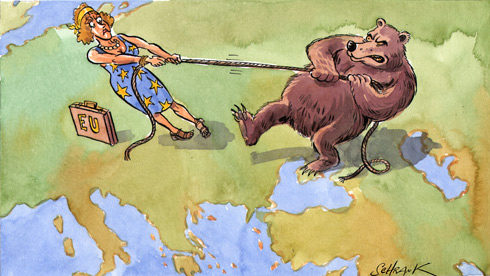 Moscow blocks the path to the EU

Russia has applied more and more pressure on its former satellites to join its proposed Eurasian Union. Lithuania, which is keen to forge new ties with the EU, is also coming under increasing powerful pressure.

Russian customs-bullying of Lithuania is part of a bigger power struggle. The Kremlin is geared itself towards obstructing the European Union’s Eastern Partnership policy and forcing Ukraine, Belarus, Moldova, Azerbaijan, Georgia and Armenia to forsake any attempt to get close to Europe, instead seeking to push these countries back under Moscow's rule via the so-called Eurasian (customs) Union.

However, Lithuania, which curently holds the EU’s rotating presidency, has been planning to host the signing of free trade agreements with Eastern Partnership states at the Vilnius summit – except Belarus, which is already in the Eurasian customs union. Lithuania has been very active in defending the Eastern Partnership states, drawing the EU’s attention to the Kremlin's pressure on these states through trade wars and blackmail.

Throughout September, vehicles with Lithuanian number plates have been targeted at the Lithuanian-Russian border, and subject to the most gruelling customs checks. This new crackdown started on September 11, and has targeted anyone trying to bring Lithuanian goods into Russia.

This week, Russia announced stricter quality requirements on milk products from Lithuanian. Naturally, this is causing financial losses for Lithuanian transport companies and exporters. [[If this is not an example of the Kremlin punishing Lithuania for protecting Eastern Partnership states, then what is?]]

What is the current situation in this geopolitical tug of war? Russian President Vladimir Putin has quickly succeeded in drawing Armenia closer to the Kremlin-controlled customs union. Armenia will not be signing any agreements with EU in Vilnius.

With Armenia beaten, Azerbaijan will be next to feel the heat, according to widespread speculation following comments by Mr Putin on the Karabakh conflict. However, the actions may not be limited to simply frustrations at customs borders. Despite enormous pressure, Ukraine is still standing tall, and refusing to bow to Kremlin blackmail. The Ukrainian government has approved a draft EU association treaty, and plans to sign it in Vilnius. Meanwhile, Moldova is also coming under Russian pressure.

Indeed, the threats are getting more severe, with the Russian vice prime minister saying that should Moldova continue to follow its European aspirations, it may lose control over Transnistria and face a cold winter - implying Russia may cut Moldova's energy supplies. Moldova has not blinked.

It does feel like EU has lost the battle in the Caucasus. Rather in the area north of the Black Sea, Kremlin pressure has rather had the opposite effect, motivating Ukraine, Moldova and the EU to work towards closer cooperation – and faster.

"The Kremlin has begun an economic war with Lithuania. Or should I say a terror campaign," writes Lithuanian journalist Valentinas Mitė on the Delfi news website.

Our trucks, full of perishable food, are stuck at the border with the Russian enclave of Kaliningrad. Lithuanian business people are counting their losses by the millions. Cars are searched so meticulously that it appears absurd. Moscow wants to show its anger at insolent Lithuania. In other words, a neighbour must be either a slave or an enemy – ili rab, ili vrag, in Russian. [...] Go ahead, put the Lithuanians together with the Ukrainians and the Moldovans! The Ukrainians are poisoning us with their chocolate and the Moldovans with their wine. Enemies. Enemies everywhere. Especially those whose eye wanders towards the EU.

On Slate.com, leader writer Anne Applebaum has this explanation for Moscow's attitude –

If Europe did manage to craft association agreements with Armenia, Ukraine, and Moldova, there’s no reason to think that a similar arrangement with Russia would not eventually follow. The explanation is as straightforward as it is sad: Russia's ruling elite, led by President Putin, does not act in Russia’s interests. Russian elites act in their own interests. At the moment, they are convinced that economic nationalism and the language of neo-imperialism will win them popular support, and possibly private profits.