There is no doubt that E. coli bacteria are dangerous. But the panic stricken response of authorities and consumers to the current outbreak of infections is largely pointless. A Belgian editorialist complains about the damage not only to the European economy but also to the spirit of Europe. 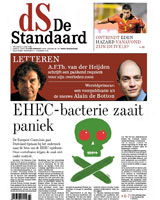 It is odd that we have learned very few lessons from successive contaminated food crises. Hot on the heels of Bovine Spongiform Encephalopathy (BSE), Severe Acute Respiratory Syndrome (SARS) and Mexican flu, we now have the sinister bacterium enterohemorrhagic E. coli (EHEC): and worse still, a rare and dangerous strain of that bacterium.

With each of these crises, we have seen the same phenomenon of widespread panic, suspension of the distribution of suspected merchandise, a negative impact on the economy, and rising tension. Thereafter, once the dreaded consequences that were predicted fail to materialise, we return to the illusion that food products present no danger, that illness can be effectively treated with medicines, and that tragedy is something that happens to other people. But who is to say that this will be the case this time around?

With hindsight, we can say that the scale of the economic consequences of these crises has borne no relation to the real nature of the threat involved. Bacteria can kill, but in the hundreds of confirmed cases, only 18 people have died. These 18 deaths are certainly to be regretted, but they represent only a tiny percentage of Germans and people visiting Germany who die of other causes in the space of one week. Nor do they amount to a reason to throw an entire continent into turmoil. And to date there has been no data to indicate that these people were themselves contagious. In short, we are not dealing with the bubonic plague.

The strengths of globalisation as well as its weaknesses

What is deplorable is the speed with which uncivilised reflexes manifest themselves. At a time when, the price of food is soaring, we are dumping these products on the side of the road, recycling them as animal feed, or simply letting them rot in the fields because no one wants to buy them. There is no doubt that Russia’s response [the suspension of imports of European vegetables] and the response of other distant buyers is regrettable, if predictable. But even more worrying is the total fragmentation that has once again emerged in Europe.

This is the same fragmentation that came to the fore in response to the banking crisis and the Greek debt crisis. Now it has turned up again in the form of hysterical reaction to threat of contaminated food and no doubt we will see it again soon when the rule of every man for himself prevails on energy markets. Europe, which is supposed to open and keep open its borders, has been powerless to prevent their closure and the ensuing economic disaster which has been prompted by shortsighted communication.

At the same time, international cooperation in the scientific community, which has quickly shed light on the contamination and the means to combat it, has offered a glimmer of hope. In a word, the food crisis has illustrated some of the strengths of globalisation as well as its weaknesses, and the deployment of expertise across the globe could play a key role in the rapid resolution of the problem.

But the question remains: will we successfully learn from what has happened? This crisis will certainly be followed by other crises in the future, and there is no knowing when and where these will occur.

Brussels and Berlin must make good their mistakes

The contamination of food products by E.coli bacteria is “the worst incident of food poisoning in Europe,” remarksABC, which draws a parallel between the current situation “and the ‘mad cow’ alert.”

In its editorial, the Madrid daily points out that the reponse of the European food alert system, which failed to prevent the propagation of the bacteria and “incalculable damage to the image of Spanish agriculture,” has proved to be an “an unmitigated failure,” and insists that “the European Commission and the German government will have to take responsibility for their mistakes.”

However, in the columns of the same newspaper, columnist Hermann Tertsch argues that we should not forget the main victims of the crisis: those who have died. Tertsch is critical of “a [Spanish] government which has been irritated by the fact that Germany has highlighted its failures” and “the thousand voices that joined in a chorus of insults directed at our main ally in Europe.” We can only hope that “the German tabloids will opt to ignore all of this anti-German idiocy.”