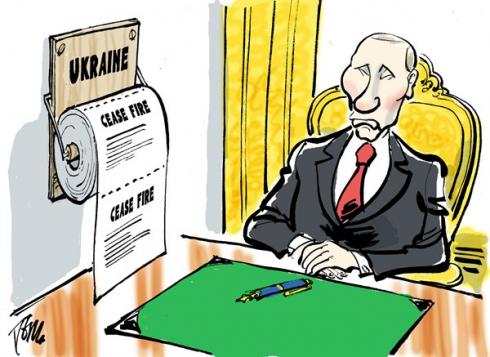 After a 17-hour marathon of talks in the Belarusian capital of Minsk, Russian President Vladimir Putin and his Ukrainian and French counterparts Petro Poroshenko and François Hollande, as well as German Chancellor Angela Merkel, announced on 12 February a ceasefire between Ukrainian troops and pro-Russian rebels in Eastern Ukraine. It will start on 15 February. The deal "also involves the withdrawal of heavy weapons from conflict areas, but some issues remain to be settled", writes BBC, according to which "the deal is very similar to a ceasefire agreed last September, which unravelled very quickly."