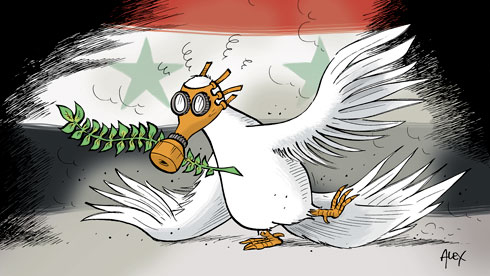 ‘No good options against Assad’

A week after hundreds of civilians were massacred in a chemical weapons attack east of Damascus, the US and Europe seem to be preparing for military action against Syrian president Bashar al-Assad. While morally justified, any action must be carefully considered beforehand, warns the European press.

By allowing the UN through to inspect the scene of the massacre, “Syria’s president will be gambling that allowing the inspectors in will deepen divisions over the appropriate response to his apparent use of weapons of mass destruction. But this is a gamble he cannot be allowed to win,” writes the Financial Times. In an editorial titled “The moral case for intervention in Syria”, the British newspaper argues that any action against the al-Assad regime will have to be carried out based on specific evidence and with broad international support. It believes, however, that

Intervention is not about entering Syria’s civil war. It is about sending a message to rogue states that the use of WMD will not be tolerated. Military action bears risks. There are no good options to resolve the threat that Mr Assad poses to his own people and the wider world. But to do nothing would be the worst one of all.

“Failing to react firmly to the Syrian chemical incident would pave the way for the savagery of our era to spread around the world,” adds editor-in-chief and director of Le Monde, Natalie Nougayrède.

Acting in a well targeted, prompt and precision manner would not end up precipitating a bout of western military adventurism. But only if the follow-up is well thought through. That would be a moment of truth for Russian diplomacy, which could find it very difficult to respond to American warships. This action would lay down a red line marking a threshold of one of the most intangible principles on which the community of nations and international security is based. This crime certainly calls for a clear and determined response.

“Hard evidence is a prerequisite to any military intervention,” warns La Libre Belgique, “merely to convince a very reluctant public, both in the United States and in Europe.” In an editorial entitled “Strike in Syria? Facts first”, the daily notes that

At the time this editorial was being written, just one clutch of presumptions is pointing the finger at the Damascus regime. That is far from enough in a country that has four intelligence services, militias, rebels, and has been the subject of many foreign interventions. Caution, here, is not a mark of weakness. It is the first stage.

In Germany, Frankfurter Allgemeine Zeitung notes that “it is Washington above all that will decide on a military response against Assad.” And this time, unlike during the intervention in Libya, which Germany did not support, “Berlin will probably stand alongside the Americans.” After all, the daily observes, “the situation has now changed, with less than four weeks to go before the elections.” And unlike in 2011, the foreign minister will not be able to stand on the sidelines.

Gaddafi had just been overthrown, and French Foreign Minister Alain Juppe had been applauded by German diplomats for his stance during the war in Libya – an affront to the master of the corps. This would surely not happen a second time to Westerwelle and Merkel. But this does not mean, of course, that Berlin will play any active role in a military intervention.

to avoid the huge errors of previous interventions in the Middle East, it is necessary to look further ahead and ask: what are the issues involved in intervention, and above all, what are the limits of international involvement? What is really expected from it, then? To topple the Assad regime? And afterwards? What part of Syria’s future will the international community take responsibility for? What type of intervention does it want: military, humanitarian, political? And what are the regional risks of such an intervention?