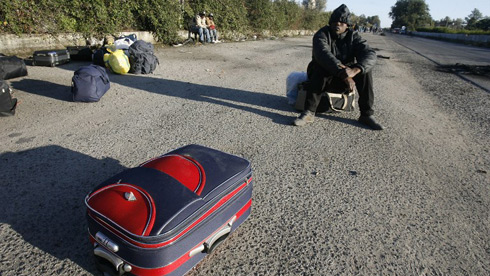 No relief in sight for the ‘slaves’ of Rosarno

At the end of 2009, Africans working in the orchards of Calabria rebelled against the inhuman living and working conditions, reopening the debate in Italy on seasonal work. Three years on, the public initiatives have failed and the migrants are still being exploited.

Migrant workers wait for a bus out of Rosarno after clashes with residents in 2010.

Those who say that everything has gone back to normal in Rosarno three years after the revolt of migrants – the looting, the counter-revolt of the Italians, the manhunt and finally the deportation of the Africans – are wrong. Today, things are worse.

Again, the number of Africans has reached a thousand, as it did three years ago. Coming in the autumn, they leave in the spring. They are here to pick citrus fruits for €25 per day, although employers prefer to pay by weight, to increase their efficiency: one euro a crate for mandarins and 50 cents for a crate of oranges, each weighing from 18 to 20 kilos.

At the height of the season they work three or four days a week, depending on the job and provided they pay three euros to the foreman who picks them up at dawn by bus. On their free days they ride bikes across the plain, do their shopping at discount supermarket, cook rice and chicken wings in rusty tin drums, get drunk on beer, and fight amongst themselves.

The two gigantic dormitories that were set up in the ruins of old factories three years ago are gone. One was closed and abandoned, the other demolished. After the events of that time all that had to be wiped out, and not just psychologically. But today the new slum between Rosarno and San Ferdinando is even more terrible, if that is possible.

The sheets of asbestos recovered from industrial graveyards, which abound in Calabria, give a sorry look to the shanties of concrete shells with walls of sheet metal. Today the roofs are made of cellophane, cardboard, recovered plastic.

Dirt embankments 20cm high prop up makeshift shelters, which will be invaded by mud at the first rain. The toilets are down at the right: two pits dug into the earth, a metre wide and 40cm deep, under the open sky and unprotected. In the biggest tent, 10m by 5m, there are at least 100 beds - or rather 100 mouldy mattresses and camp cots. The smell is indescribable. No water, no sewage, no electricity. For partitions, there are piles of garbage.

“It's a barbarous situation, shameful, a horror,” rages Domenico Madafferi, the mayor of San Ferdinando. Based on a report on the “virtually non-existent hygiene” the “health hazard” the “crumbling shacks” and the “illegal dwellings without the least viability” that “could be sources of infection”, he put his signature to an eviction order. “It's a way to put pressure on the government and the region, after futile meetings, appeals and complaints in writing,” he explains. “But nothing has changed. We only have promises.”

And yet, only a year ago, the authorities opened a model camp right at this spot: 280 places, huge tents, each for four people, oil heaters, satellite TV, campground restrooms, lighting in the walkways, organised garbage pick-up, a dining room and a kitchen, medical assistance. A little corner of Switzerland in the plain of Gioia Tauro.

The region came up with €55,000 to manage it. The regional government paid the electricity. The mayors - Elisabetta Tripodi of Rosarno and Domenico Madafferi of San Ferdinando - did the rest. The most diverse associations and their volunteers - Catholic, secular, evangelicals - hurried forward to offer assistance, meals, blankets, thanks to the help of thousands of people; no hint of racism here.

In February 2011, containers were added to the tent camp: 120 migrants divided into six modules furnished with kitchens and toilets. Not only were the last ghettos dismantled, but the “Rosarno model”, a first, provided lodging for each migrant at a cost of two euros per day per person, contrasted with about 45 generally spent by the Civil Protection.

So, although the number of beds - 400 - was only a third of what is needed, to have prepared for an emergency, even temporarily, in a region where the state of emergency is permanent (some time ago, the top three municipal administrations were dissolved simultaneously because of links to the mafia) seemed nothing short of a miracle. Soon, though, the miracle was revealed to be merely a fleeting interlude.

June 2012: the financing for the region runs out. The tent camp is closed and abandoned, waiting for the next agricultural season. In August, the mayors write to the region and the government: the camp must be organised in time, or chaos will return. And this is indeed what happened. At the end of October, when the mandarin picking began, the camp, which has no manager or administration, was taken over by migrants and quickly saturated.

In the beginning there were six people per tent, but newcomers quickly pour in and join them. The mayors call for help. They have neither the means, the facilities nor the staff to control the situation. “The region and the government are dragging their feet, and the Minister [for international cooperation and integration] Andrea Riccardi is not responding. Only the President of the Republic has given any warning signals, by purchasing and sending blankets, but not enough,” the mayor says angrily. After a few weeks, the cafeteria turns into a huge dormitory. There is no more space, and latecomers begin to put up a shantytown next to the original camp.

With no maintenance, the sewage system is not enough for a population that has quadrupled. The containers equipped with toilets have quickly become unusable sewers. The kitchens are closed, and garbage bins are overflowing. A sum of €50,000 to €70,000 would be enough to regain control of the management of the camp and let it work effectively and decently until spring. This would be only 0.000006 per cent of Italian public spending, and would enable the promises made three years ago to be kept. Is this too much for Rosarno?