Not such wicked leaks

For the celebrated novelist and intellectual Umberto Eco, the Wikileaks affair or "Cablegate" not only shows up the hypocrisy that governs relations between states, citizens and the press, but also presages a return to more archaic forms of communication. 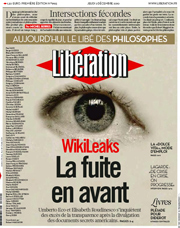 The WikiLeaks affair has twofold value. On the one hand, it turns out to be a bogus scandal, a scandal that only appears to be a scandal against the backdrop of the hypocrisy governing relations between the state, the citizenry and the press. On the other hand, it heralds a sea change in international communication – and prefigures a regressive future of “crabwise” progress.

But let’s take it one step at a time. First off, the WikiLeaks confirm the fact that every file put together by a secret service (of any nation you like) is exclusively made up of press clippings. The “extraordinary” American revelations about Berlusconi’s sex habits merely relay what could already be read for months in any newspaper (except those owned by Berlusconi himself, needless to say), and the sinister caricature of Gaddafi has long been the stuff of cabaret farce.

Embassies have morphed into espionage centres

The rule that says secret files must only contain news that is already common knowledge is essential to the dynamic of secret services, and not only in the present century. Go to an esoteric book shop and you’ll find that every book on the shelf (on the Holy Grail, the “mystery” of Rennes-le-Château [a hoax theory concocted to draw tourists to a French town], on the Templars or the Rosicrucians) is a point-by-point rehash of what is already written in older books. And it’s not just because occult authors are averse to doing original research (or don’t know where to look for news about the non-existent), but because those given to the occult only believe what they already know and what corroborates what they’ve already heard. That happens to be Dan Brown’s success formula.

The same goes for secret files. The informant is lazy. So is the head of the secret service (or at least he’s limited – otherwise he could be, what do I know, an editor at Libération): he only regards as true what he recognises. The top-secret dope on Berlusconi that the US embassy in Rome beamed to the Department of State was the same story that had come out in Newsweek the week before.

So why so much ado about these leaks? For one thing, they say what any savvy observer already knows: that the embassies, at least since the end of World War II, and since heads of state can call each other up or fly over to meet for dinner, have lost their diplomatic function and, but for the occasional ceremonial function, have morphed into espionage centres. Anyone who watches investigative documentaries knows that full well, and it is only out of hypocrisy that we feign ignorance. Still, repeating that in public constitutes a breach of the duty of hypocrisy, and puts American diplomacy in a lousy light.

A real secret is an empty secret

Secondly, the very notion that any old hacker can delve into the most secret secrets of the most powerful country in the world has dealt a hefty blow to the State Department’s prestige. So the scandal actually hurts the “perpetrators” more than the “victims”.

But let’s turn to the more profound significance of what has occurred. Formerly, back in the days of Orwell, every power could be conceived of as a Big Brother watching over its subjects’ every move. The Orwellian prophecy came completely true once the powers that be could monitor every phone call made by the citizen, every hotel he stayed in, every toll road he took and so on and so forth. The citizen became the total victim of the watchful eye of the state. But when it transpires, as it has now, that even the crypts of state secrets are not beyond the hacker’s grasp, the surveillance ceases to work only one-way and becomes circular. The state has its eye on every citizen, but every citizen, or at least every hacker – the citizens’ self-appointed avenger – can pry into the state’s every secret.

How can a power hold up if it can’t even keep its own secrets anymore? It is true, as Georg Simmel once remarked, that a real secret is an empty secret (which can never be unearthed); it is also true that anything known about Berlusconi or Merkel’s character is essentially an empty secret, a secret without a secret, because it’s public domain. But to actually reveal, as WikiLeaks has done, that Hillary Clinton’s secrets were empty secrets amounts to taking away all her power. WikiLeaks didn’t do any harm to Sarkozy or Merkel, but did irreparable damage to Clinton and Obama.

What will be the consequences of this wound inflicted on a very mighty power? It’s obvious that in future, states won’t be able to put any restricted information on line anymore: that would be tantamount to posting it on a street corner. But it is equally clear that, given today’s technologies, it is pointless to hope to have confidential dealings over the phone. Nothing is easier than finding out whether a head of state flew in or out or contacted one of his counterparts. So how can privy matters be conducted in future? Now I know that for the time being, my forecast is still science fiction and therefore fantastic, but I can’t help imagining state agents riding discreetly in stagecoaches along untrackable routes, bearing only memorised messages or, at most, the occasional document concealed in the heel of a shoe. Only a single copy thereof will be kept – in locked drawers. Ultimately, the attempted Watergate break-in was less successful than WikiLeaks.

I once had occasion to observe that technology now advances crabwise, i.e. backwards. A century after the wireless telegraph revolutionised communications, the Internet has re-established a telegraph that runs on (telephone) wires. (Analog) video cassettes enabled film buffs to peruse a movie frame by frame, by fast-forwarding and rewinding to lay bare all the secrets of the editing process, but (digital) CDs now only allow us quantum leaps from one chapter to another. High-speed trains take us from Rome to Milan in three hours, but flying there, if you include transfers to and from the airports, takes three and a half hours. So it wouldn’t be extraordinary if politics and communications technologies were to revert to the horse-drawn carriage.

One last observation: In days of yore, the press would try to figure out what was hatching sub rosa inside the embassies. Nowadays, it’s the embassies that are asking the press for the inside story.