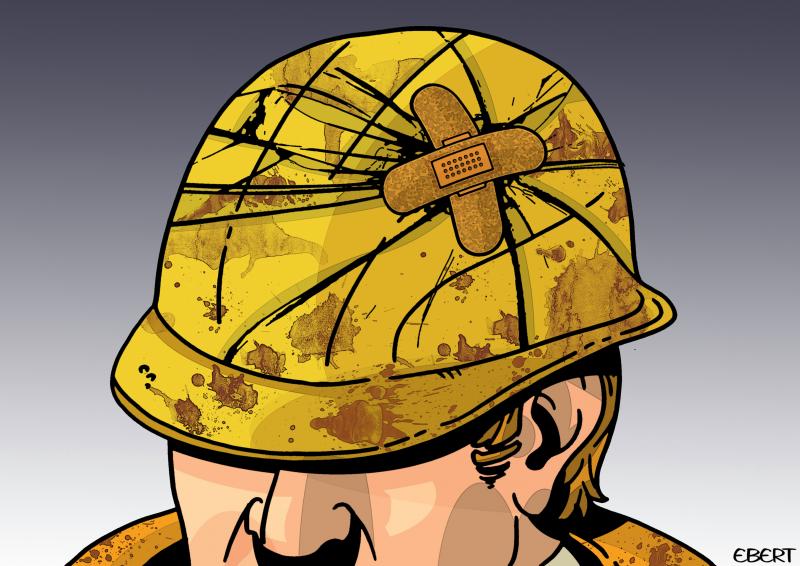 The European Commission has just presented its new strategic framework for occupational health and safety. However, many experts deem the measures proposed insufficient, due to the lax legislative treatment of businesses.

“Some believe that since people are working behind a desk, occupational health and safety issues are no longer so important. But this is not the case at all." Danish MEP Marianne Vind is about to dive into the new strategic framework on health and safety presented by the European Commission. Her report will be presented to the European Parliament in 2022. For the social democrat, the task is immense. "Covid-related confinement has revealed the loneliness and stress that teleworking employees can often experience. Some work environments also still entail physically strenuous activity. Not to mention carcinogens that are still being recorded for a comprehensive list." In 2021, occupational health and safety risks are still a clear and present danger.

One figure sums up this sad reality. According to the European Agency for Safety and Health at Work (EU-OSHA), more than 120,000 occupational cancers are recorded each year in the European Union. This means that from nurses to firefighters, from janitors to labourers, millions of workers across the EU are exposed to deadly carcinogens, mutagens and reprotoxins in the workplace, putting their lives at risk.

Over the years, the European Commission has taken note of developments in the economy in its multi-annual "strategic framework". These developments, dominated by services and SMEs in a revitalised technological environment, bring new risks, whether psychosocial or musculoskeletal. "The risk is also due to the fact that micro and small companies are currently managed by people who know little about health and safety issues. There is less protection for workers. There is a lot of ignorance in this area," explains David Walters, professor emeritus at the Cardiff School of Social Sciences. “Plus, with new platforms, the employer/employee relationship no longer applies; it's no longer clear who is responsible. The same goes for supply chains, where you have to track back to the buyers.” Such developments present real challenges for Member State labor inspectors.

David Walters contributed to an article recently published by the European Trade Union Institute (ETUI), which builds on research by the European Agency for Safety and Health at Work, taking stock of how existing regulations are being enforced. The EU appears to support targeted interventions for inspections, with proportionate penalties, along with the development of innovative communication tools, and sharing the same best practices from one country to another.

However, according to the authors of the article, the EU seems to content itself with broad principles, limited in practice by a market logic that has tended for several decades to promote legislative "rationalization", and the reduction of administrative burdens for companies. "Such neoliberalism is now depriving labour inspectors of the resources they need to carry out their work," says Marian Schaapman, head of the ETUI's Working Conditions, Health and Safety Unit. "Result: labour inspectors can only visit a company once every thirty years on average".

The European institutions do not question the political and economic causes of workplace transformations. As the authors of the ETUI paper point out, this means the causes of work-related risks and their likely solutions are given only "approximate" consideration. Similarly, because they don’t currently reach a large number of companies, labour inspectorates prioritise informing companies and bringing them into voluntary compliance, thereby reducing the risk of penalties.

The EU seems to content itself with broad principles, limited in practice by a market logic that has tended for several decades to promote legislative “rationalization”, and the reduction of administrative burdens for companies

The research shows that "inspections issuing in recommendations or even penalties are a strong deterrent and reduce workplace injuries,” says Marian Schaapman. "There’s a balance to be struck between penalties and softer measures, such as information campaigns for employers. But those who repeatedly flout the rules must be punished. And the risk of fines must be high. We need a carrot and stick strategy." To optimize compliance and inspections, the regulations take an approach based on risk analysis: high-risk activities or companies - such as agriculture, construction or heavy industries - are priority targets for the labor inspectorate.

Nevertheless, an activity that does not present a health and safety risk today may prove dangerous tomorrow. "In some countries, labour inspectors work with a simplistic assessment of risk levels: heavy industry is classified as risky and office work is not," says David Walters. "This is incorrect, since office work can in fact present high levels of risk. There’s an awareness they won't be inspected”. Critics see the risk-based approach as yet another manifestation of deregulated compliance, where the state is weak and efforts are focused on self-regulation and sharing of best practices.

This is all the more regrettable given the inherent power imbalance between employer and employee, and the fact that unionization rates in some member states have fallen to a trickle, preventing employees from getting their voices heard. Nevertheless, the research and "strategic frameworks" established by the EU do involve trade unions in promoting occupational health and safety. However, their involvement remains perfunctory - simple information campaigns, for example. Other workers' organizations would clearly benefit from inclusion. Migrant workers' centers, young workers' centers, workers' advocacy centers, and workers' legal advice centers have much to contribute in terms of inspections and compliance. Yet these groups are ignored by the European Union in the outline of its multi-annual strategies.

More : Surveillance before safeguards: Algorithms will only deepen workplace distrust

So how can these weaknesses in occupational health and safety compliance be dealt with? In order to adapt to new working arrangements, inspectorates need to innovate. For example, tracing responsibility up through the supply chains. Market pressures linked to compliance with social standards are also a good incentive: supply chains are sensitive to the image they project and do not want to be caught in the global spotlight due to health and safety concerns. This is what happened to brands such as Gap, Benetton, C&A and Mango, when in 2013 a building in Bangladesh they were using for cheap manufacturing collapsed, killing more than one thousand people. International pressure led brands and retailers to sign an agreement on fire and factory safety in Bangladesh, which they had previously rejected.

More broadly, Marian Schaapman wants a shift in responsibility. Implementation and enforcement can primarily be the responsibility of Member States, Schaapman argues, but a much stronger orientation in EU policy is needed. "Today, neoliberal policies prevail in most Member States, which does nothing for the social face of Europe," she adds. "But the health and safety of workers is not for sale. It is in fact a fundamental human right”.