Report Emigration
Marcio Charata (right) at the Maputo fish market. Charata left Portugal after his company closed in 2011 due to the financial crisis 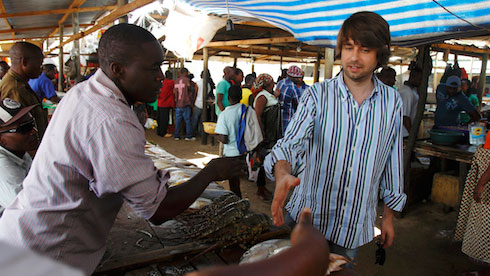 On the road to Mozambique

Settling in Mozambique is increasingly attractive to a growing number of Portuguese who are suffering from the crisis. Less threatening than Angola, Mozambique has raised expectations among a people confused by events – even if some of them are coming back empty-handed.

Marcio Charata (right) at the Maputo fish market. Charata left Portugal after his company closed in 2011 due to the financial crisis

About 40 people wait for the doors to open at the Embassy of Mozambique in Portugal. Tierri Rodrigues is the last person in the queue. The 43-year old Portuguese man has gathered all the documents necessary to obtain a 60-day tourist visa for Mozambique. Yet, after four months of fruitless searching in Portugal, Mr Rodrigues is going there to work. “I have contacts with companies over there, but nothing is sure," he says.

A civil engineer, trained at the ISEL, a prestigious engineering school in Lisbon, Mr Rodrigues is using part of his severance pay to finance his trip to Maputo, Mozambique's capital. "Family and friends gave me good advice" on the country, where, he was told, "there is plenty of work". In fact, he will be staying with friends while in Mozambique where he hopes to find what he lacks here - a job.

He could go to Angola where the job offers are just as plentiful but "I want to come back alive," he says, explaining that he has heard better things about Mozambique. "Security is better and the population is more open to the Portuguese," [the former colonial power in both countries].

Following the boom in Angola, the Portuguese are now turning to Mozambique because the country offers a bright future from both a business and an employment stand point. The trend can be seen in the number of [Portuguese airline] TAP passengers to Maputo in 2012, 70,563, a 26 per cent jump from 2011, while flight occupancy rates rose to 85.5 per cent from 79.2 per cent in the same period.

In 2011, according to the Mozambique Labour Ministry, 4,355 Portuguese lived in the country. Current official statistics are not available, but the number has clearly skyrocketed during 2012 and is estimated today at 25,000.

Demand is so great that, in early January, the Mozambique Migration Office (DNM) stopped issuing visas at the border. Many Portuguese, arriving on the pretext of a tourist visit, would request a visa on arrival in Maputo.

"The DNM has identified several cases of visas delivered fraudulently or for reasons unrelated to the real reason of the stay," explained the Portuguese General Consulate in Maputo in a press release dated January 30. Since the strict application of entry requirements for foreigners to Mozambique, some Portuguese have been left stranded upon arrival or had to return home. This caused some confusion among the consular services which are ill-adapted to the flow of demand they currently face.

‘Streets not paved with gold’

Promoted by the banks and the chambers of commerce, the crisis in Portugal has pushed a growing number of individuals and businesses to look to the Mozambique market.

Yet, Diogo Gomes de Araújo, head of SOFID, a development bank funded mostly by the Portuguese state to help emerging nations, issues a warning. "You should not leave on a whim," he says, adding that Maputo is "a city getting more and more expensive." He adds that "life is tough there for the unemployed." There are more and more stories about Portuguese people forced to live on the streets or asking to be repatriated.

"Before emigrating or beginning any business activity in the country," advises Diogo Gomes de Araújo, individuals, as well as businesses, should "obtain in-depth information, know the market, its pace and its rules. It is indispensable to know the country, to talk to as many people as possible, to set up a detailed business plan and to evaluate the risks and the competition." For, while it may be true that prices are soaring and real estate speculation is booming, at the same time, the country has a small middle class and few consumers.

The attraction of Mozambique in recent years is due to two things, according to Diogo Gomes de Araújo. First, the economic development of Mozambique and second, the crisis in Portugal. To his eyes, Mozambique is "a trendy country," yet "one must remember that the streets are not paved with gold". Ricardo Pedrosa Gomes, president of the Portuguese Builders and Public Works Association agrees. He warns of the vastness of the country, lamenting "those many emigrants who are dumped anywhere and in the wrong place". Yet, "all trends are based on something," he argues, adding that "Mozambique has an undeniable potential". With an annual growth rate of 7 to 8 per cent, the Portuguese are not the only emigrants pouring into the country.

Portuguese citizens living in Angola sent home almost €271m in 2012, a 83.7 per cent hike from 2011, writes Público, and a four-fold increase on five years ago. Figures from the Bank of Portugal reveal that total remittances from Portuguese emigrants peaked last year at €2.75bn, 10 per cent of which came from Angola. Its capital, Luanda, is an increasingly attractive destination for Portuguese citizens. There are now more nationals living there are now than during colonial times, which eneded in 1975. The money sent home from Angolans living in Portugal is 18 times smaller.
This data underlines a growing trend: it was in Portuguese-speaking countries that remittances to Portugal grew the most, due to economic booms in nations such as Angola or Mozambique. Portuguese emigrants in Mozambique sent home €5m in remittances in 2012. Remittances have also grown in Spain, Germany, Italy and the Netherlands, although France retains the number one slot, with Portuguese people sending home €846.1m in 2012.