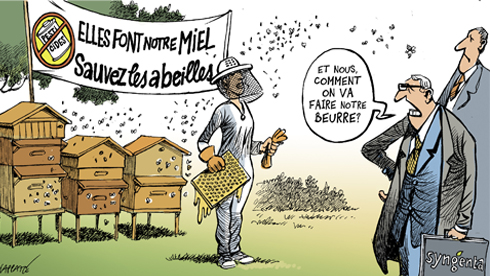 Pesticide ban to end the slaughter of the bees

In response to concerns over declining bee populations, the European Commission voted on April 29 for a two-year ban of pesticides thought to be harmful to the insects.

"They make our honey. Save the bees." "And how will we make our money?"

Fifteen of the 27 member states gave the Commission the support it needed to push through the EU-wide halt on using three “neonicotinoid” chemicals on crops attractive to bees.

British daily The Independent, which lobbied in favour of the ban, notes the UK voted against it, because of an alleged lack of scientific evidence to support it.

The paper, however, recalls that “more than 30 separate scientific studies have found a link between the neonicotinoids […] and falling bee numbers” and that the proposal to ban the insecticides “was based on a study by the European Food Safety Authority, which found in January that the pesticides did pose a risk to bees' health.”

The daily acknowledges divides in the scientific community over the ban. Professor Lin Field, head of biological chemistry and crop protection at Rothamsted Research, fears the decision was based on “political lobbying” and could lead governments to overlook other factors, while University of Cambridge researcher Dr Lynn Dicks says the vote was “a victory for the precautionary principle, which is supposed to underlie environmental regulation.”

The Daily Telegraph reports some agricultural observers are uneasy about unintended consequences of the ban, including farmers using older pesticides that are more damaging to crops and other species.

However, in an editorial, The Times defends the ban, saying it will pave the way to a better understanding of what is happening to the bees:

The moratorium should make it possible to gauge whether bee colonies recover in the absence of neonicotinoids. It also represents an opportunity for comprehensive study of the other possible causes of falling bee numbers, and for creating a foolproof strategy for their revival.