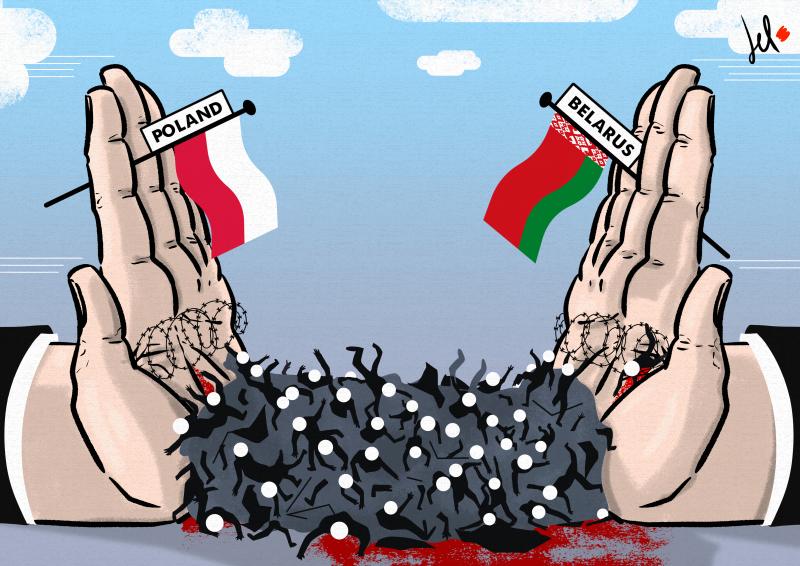 No matter how many ways Polish allies of Hungarian Prime minister Viktor Orbán try to imitate his xenophobic tactics, it always turns out at best ineffective and often outright counterproductive. The same happens when Warsaw has tried to reproduce Hungarian narratives and strategies about border protection in the current crisis with Belarus, says Wojciech Przybylski in Warsaw.

Some say that Poland under Communism was the merriest camp in the block for the reason that it has been so bad in implementing authoritarian methods by others, like Moscow or Beijing.

Similarly today, despite the imposition of a constitutionally provisioned state of emergency in the border area, the PiS (Law and Justice) party seems to be hardly in control of the situation where an autocrat from the other side of the border fence has held the political communication initiative for most of the time.

In effect, the Polish ruling party has missed an opportunity to capitalise on the crisis and increase its support base. The state-owned CBOS institute opinion poll from mid-November shows that the party enjoys merely 30 per cent support – the lowest since 2015. This downturn has taken place while the majority of the public opinion (70 per cent) supported forceful protection of the border including pushbacks, and the opposition was unable to produce a unified response and at times even ridiculed itself.

At the very beginning of the crisis on the Polish border in late summer, both the government and the opposition had been racing against each other for the title of the most absurd response to the crisis. […] Then, on 2 September, PiS introduced a state of emergency cutting off access of activists and journalists to the border zone and it appeared that the government will ultimately triumph over the opposition.

More : A crisis created by Lukashenka’s regime to divert the attention of Belarusians

The sense of control by the government was quickly lost when Mariusz Kamiński, Minister of Interior, and Mariusz Błaszczak, Minister of Defence, organised an infamous press conference on 27 September, gawping at a big screen with zoophilia porn videos as well as other types of gore content allegedly found on smartphones of some men who crossed the Belarusian-Polish border illegally. Quickly afterwards, internet investigators found out that the recording was most likely an old VHS recording — one of many commonly found on the dark web. When this news broke a day later, the government’s communication credibility about the crisis was self-obliterated and remains so until now.

On the same day as the conference, Poland learned the tragic story of several children and their parents detained in Michałowo, some 15 km from the border. Border guards and police were obliged by new Polish law to push back all who cross the border illegally, including the children.

Also for security reasons PiS cannot risk a more xenophobic narrative. Because of its complicated history, the border with Belarus is today one of the most ethnically and religiously diverse in the whole country

The presence of children had been documented by the press, which is free to operate outside 3 km state of the emergency zone, and then they disappeared raising public opinion concerns that Poland has put them back on the border to the woods and swamps - a common landscape on the 400 km long Polish border with Belarus. Three weeks later they were found by journalists in a forest camp by the border confirming grim suspicions.

By that time, Polish services had already reported several deaths of people who had experienced hypothermia or other ailments while stuck in the woods.

Michałowo’s local council was shocked and, like several other local communities, prepared its own response. By now several towns and villages, as well as individual countryside dwellers on the border, illuminated green beacons by their building — a symbol of hope — and were providing hot meals and clothes to those who made it. They also report newcomers to the authorities who come to pick them up and drive them back to the border after checkups in local hospitals. Meanwhile, Polish charity activists continuously sought out and helped people hiding in the forests.

Part of the problem with copy-pasting Hungarian narratives about migration in Poland is that, on one hand, migration is a common experience among Polish families. From the most recent experiences to much older generations, Poles have been self-identifying as migrants for many years. A very wel…